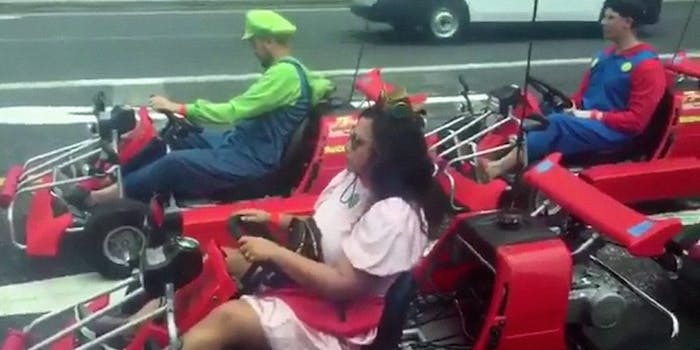 It’s not everyday you get to ride alongside go-karting royalty.

While in Tokyo to promote Logan, Hugh Jackman noticed something odd about the drivers in the lane next to the car he was in. Instead of regular drivers, he saw a number of people driving in Mario Kart-style go-karts and dressed up like Mario, Luigi, Princess Peach, Bowser, Yoshi, and other characters. It appears to be part of a Tokyo-based go-karting tour like MariCar that lets people dress up like their favorite Mario Kart characters (and a few others) and ride around Tokyo in go-karts.

It doesn’t look like Jackman knew where they came from or why they were on the road, but it didn’t take long for him to respond with enthusiasm. His commentary is absolutely wonderful.

Luckily for everyone around the Mario Kart drivers, it doesn’t look like there were any bananas or shells in sight. Or worse, they could be on Rainbow Road.