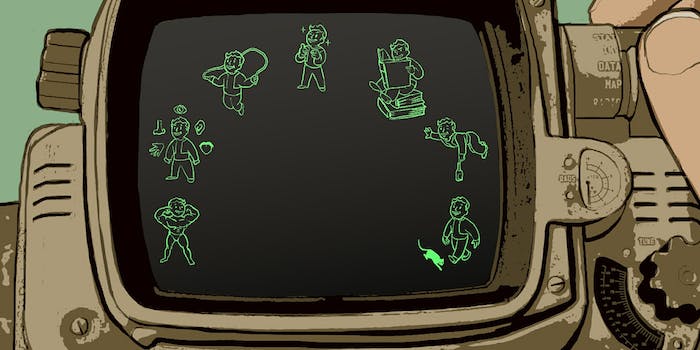 3 things to do before you start Fallout 4

Today you begin your new journey into the nuclear wastelands. It’s time to get ready.

You waited years for a new Fallout game, and patiently sat through months of hype since Fallout 4 was announced this spring. Now the game is probably sitting in a delivery box at your house while you’re stuck at school or work.

If the wait is killing you, there are things you can do right now to prepare yourself to explore post-nuclear apocalypse Boston.

1) Learn about the lore of the Fallout universe

The Fallout franchise has had a tectonic effect on the video game industry thanks in large part to its imaginative depiction of an alternate-reality United States. Fallout is locked into the cultural that defined our world in the 1950s—an era it never grew out of.

Fallout 4 is clearly designed with new players in mind. The intro gives Fallout fans the best first-hand look they’ve ever had at what life was like in October 2077 before the bombs fell. You don’t need to understand the history of the Fallout universe to jump right into and enjoy the game.

It’s pretty cool lore, however, and the ShoddyCast channel on YouTube put together a documentary-style history of Fallout that is worth checking out.

2) Remind yourself how the S.P.E.C.I.A.L. system works

Ever since Fallout 1 was released for PC in 1997, your character has been defined by seven statistics that determine how you fight, and how you interact with other characters, and how well you tackle all the different challenges of thriving in the wasteland.

Bethesda has made it easier than ever via an interface new to Fallout 4 to trace the relationships between stats and available Perks. It also produced a set of 1950s-style animated shorts that will help us go over this.

Strength is your chief S.P.E.C.I.A.L. stat if you want to build a melee character. Getting in the face of a 10-foot-tall, green, angry Super Mutant may sound unwise, but smashing one of them with a pneumatic Power Fist is hilarious. The more points you put into Strength, the more damage you do with melee weapons.

Scavenging is essential to survival after an apocalypse of any flavor. You only need to watch a few episodes of The Walking Dead, or other zombie fiction for a healthy reminder of this. Your Strength also determines how much you can carry. This is particularly important when you’re traveling alone without a companion to help mule your loot around for you.

Strength Perks include bonus damage from unarmed attacks or melee weapons, the ability to more efficiently use heavy weapons like miniguns and missile launchers, and unlocking the Blacksmith and Armorer skills for melee weapon and armor mods respectively.

If you want to depend on guns in Fallout 4, then Perception will be an important S.P.E.C.I.A.L. stat for you. Rifles and sniping are much more effective if you have a high Perception score.

Perception also determines how well you can make use of V.A.T.S., or the Vault-Tec Assisted Targeting System. Related Perks include the ability to view enemy damage resistances while in V.A.T.S. so you may choose the best weapon to use, extra accuracy in V.A.T.S. if you target the same body part with multiple shots, and the ability to shoot enemies through cover.

Perception has general utility for all character builds regardless as to what type of weapons you prefer. A high Perception score can open up Perks for pickpocketing, lockpicking, and use of explosives.

Health in Fallout, like in almost every role-playing game, is measured in Hit Points, and a high Endurance score means more Hit Points. The higher your endurance, the more you can sprint without getting winded.

Just as important for characters with a lot of points spent in Endurance are survival-related Perks, like the ability to drink irradiated water and food to regain health without adverse effects, and the ability to use massive amounts of combat drugs without getting addicted to them and suffering withdrawal symptoms.

Characters with very high Endurance scores can take Perks that vastly reduce the chance of limb injuries and losing the ability to hold weapons or to sprint, enable the character resist radiation damage, or even allow the player to use radiation to heal themselves.

It’s easy to lose track of the fact that Fallout 4 is a role-playing game with all the gunplay, but Fallout means relationships with characters and depending on other people for information. Whether or not you can successfully leverage other people depends on high Charisma.

Charisma affects the prices you can sell your goods at and how much you have to pay for things. It allows you to better manipulate members of the opposite sex and gives you the ability to pacify animals or humans with a show of force without having to pull the trigger.

Charisma is the one S.P.E.C.I.A.L. stat that’s easiest to temporarily boost by putting on special items of clothing, or drinking certain types of alcohol, so you can probably get away with not putting many points into Charisma in the early game. Just change into your business clothes and have a drink before you deal with traders, or try to talk up the local population.

Intelligence is one of the most important S.P.E.C.I.A.L. stats to boost early if you’re going into Fallout 4 for the long haul. The higher your Intelligence the more experience points you earn, which means you level faster and attain new Perks more quickly.

The effectiveness of healing drugs is affected greatly by an Intelligence-related Perk. You need a solid Intelligence score to access the skills that unlock mods for guns and high-tech weapons like Laser and Plasma guns, the most common ranged weapons you’ll use in Fallout 4.

Intelligence also has general utility for all builds beyond experience point bonuses. The higher your Intelligence, the higher difficulty of computer terminal you may hack, which makes it possible to shut down automated defense systems and access choice loot behind locked doors. Intelligence Perks also make it possible to hack robots, of which you’ll find plenty.

Agility is another combat-oriented stat. Each shot you take in V.A.T.S. uses some of your Action Points. Sprinting also draws from your Action Point pool. The higher your Agility, the more AP you have.

Characters with high Agility also gain access to Perks that grant increased reload speeds, and the ability to spread your V.A.T.S. shots around to multiple targets and earn damage bonuses for doing so.

Of all the S.P.E.C.I.A.L. stats in the Fallout games, Luck is the toughest one to pin down in terms of the scope of its influence. Luck affects everything from how good the loot you find is, to how much ammunition and how many caps you discover in containers, to getting that high-damage hit on an enemy just when you need it.

Finally, Luck is tied to the all-important Critical Hits that you trigger manually in Fallout 4, and that can get you out of a serious jam. Perks for characters with high Luck scores include Criticals that do 50 percent more damage and the ability to use Critical hits way more often than if you don’t have the related Perks.

The Pip-Boy wrist-mounted personal computer is the most important piece of gear you own in a Fallout game. It’s an inventory manager, personal medic, map reference guide, and kick-ass stereo system all rolled into one.

For Fallout 4, Bethesda released a special Pip-Boy Edition that comes with a plastic replica of the iconic device. The Pip-Boy replica comes with foam inserts that fit a wide variety of iPhone and Android devices, so that you can run a Pip-Boy app through the window of the replica and pretend like you actually own a Pip-Boy.

But even if you don’t own the replica, the Pip-Boy app might be more useful on a tablet anyway for the larger screen and the ability to prop it up in front of you without a huge hunk of plastic also being attached. You also get a free, retro-style Pip-Boy game named Atomic Command when you download the app, which nicely fills the space created by the frequent loading screens in Fallout 4.

The app is available on the iTunes and Google Play stores.