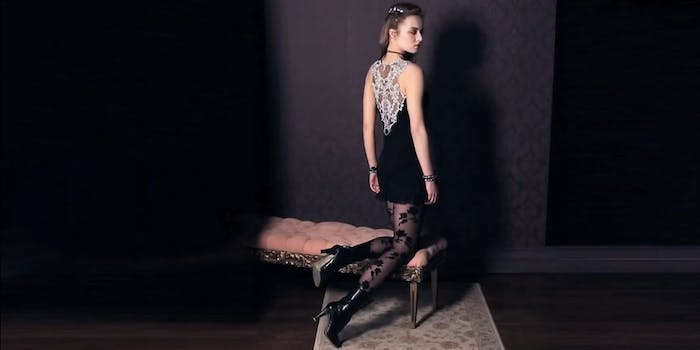 No complaints about historical accuracy, please. This is Hot Topic, after all.

Hot Topic embraced geek fashion with clothes inspired by Marvel heroes and Orphan Black, but its latest tie-in collection is a return to the brand’s teen-goth roots.

The retailer’s Penny Dreadful collection is dedicated to a faux-Victorian style inspired by Eva Green’s Penny Dreadful character Vanessa Ives, who wears some truly stunning costumes on the show. Unfortunately, Hot Topic’s interpretation mostly aims for minidresses and tank tops rather than floor-length vampire gowns, but hey, they probably know what sells. If you want something more authentic, you’ll have to spend a lot of money on Ebay and Etsy.

Our favorite detail from this video is the scorpion lace, which looks like an abstract pattern until you take a closer look. The 1890s London map dress will also be a hit among Sherlock Holmes fans, although we’re not sure what wet-look leggings have to do with Penny Dreadful or the Victorian era.

For a full-on Vanessa Ives aesthetic (i.e. hollow eyes, messy hair, and an air of being personally tormented by Satan), we recommend this makeup tutorial and these hair instructions from XOVain. Summer may be on its way, but it’s never too late to embrace your inner goth.