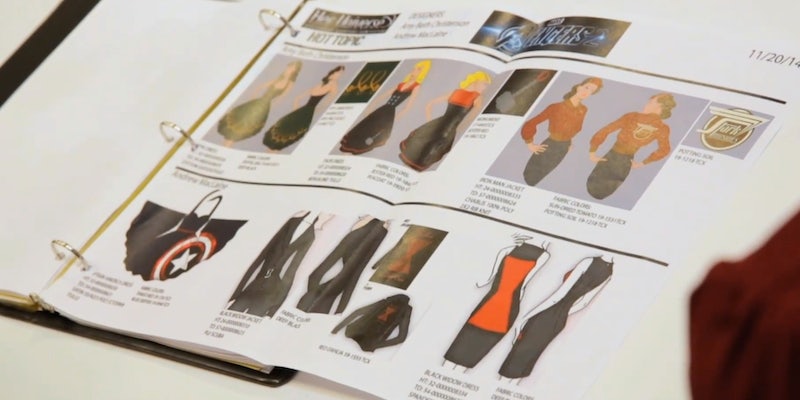 The new collection will include a Loki dress, Black Widow jacket, and more.

During San Diego Comic-Con’s first-ever geek couture fashion show last year, two designers out of 36 finalists were crowned the winners. They earned the chance to collaborate with Her Universe on a new collection for Hot Topic, and now we finally know what they’ve been working on all these months.

Hot Topic recently released two videos on YouTube offering a behind-the-scenes look at the creation of the new line titled Marvel by Her Universe. The collection is inspired by the Avengers and will be available at least for presale by the time Avengers: Age of Ultron arrives in theaters. Both of the Marvel by Her Universe videos include comments from Her Universe founder Ashley Eckstein, Hot Topic’s Cindy Levitt, and the two winning designers, Andrew MacLaine and Amy Beth Christenson.

The first episode offers an overview of the Comic-Con fashion show and the motivation behind it, while the second focuses on the creation of the line, showing the designers hard at work. According to Eckstein in the video, they chose a pinup, rockabilly, ‘50s style for the line based on what they’ve seen from fans at conventions.

The designers were given a list of Avengers characters they could choose from to inspire their work and in the end MacLaine designed a Black Widow shift dress, a Black Widow jacket, and a Captain America pinup dress, while Christenson designed a Thor dress, a Loki rockabilly dress, and an Iron Man bomber jacket. Eckstein and Levitt stress the subtlety of the collection in the video, and from what can be seen, it does look like most of these items can be for anyone whether they are a fan of the specific character or not. The pieces are obvious callbacks to the Avengers for those familiar with them, while for others they can just be fashionable designs.

No photos of the specific pieces have been released yet, though Eckstein was sporting the Loki dress at WonderCon this past weekend.

The collection will be available for preorder starting on April 21.