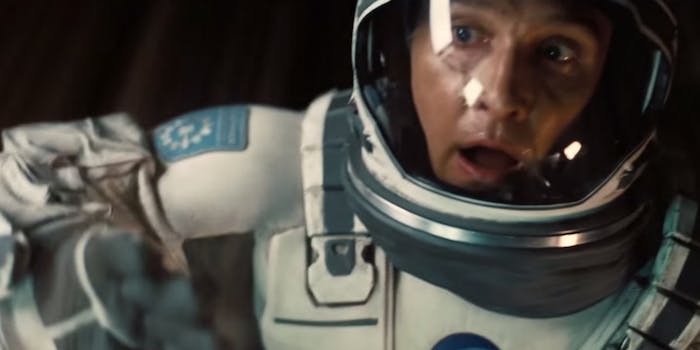 No, it wasn’t just you. 'Interstellar' makes no sense.

The folks at Screen Junkies have taken a cold, hard look at Christopher Nolan’s space odyssey Interstellar and rendered judgement in one of their trademark Honest Trailers.

Interstellar is one of those high-concept movies that looks really good but fails to find any coherent logic, this time in the form of saving humanity from the impending collapse of Earth’s biosphere.

One example of the many head-scratching moments from the story: Humans from the future open a wormhole to allow humans from the past to escape Earth’s dying biosphere. Ignore the paradox for a moment. When our heroes Matthew McConaughey and Anne Hathaway emerge on the other side, they discover that all the potential planets for humans to relocate to are on the edge of a black hole.

You know, a black hole, a gaping maw in time and space that you cannot escape from once you are caught in its gravity. So why would future humans, who have the power to create wormholes in the past, choose such a crappy place to try and relocate their species? Couldn’t they make a wormhole that opened up somewhere else? Anywhere else?

The Honest Trailers crew either missed or didn’t want to spoil this particular, nonsensical aspect of Interstellar’s plot, but have nailed most of the other high points of the film’s craziness.