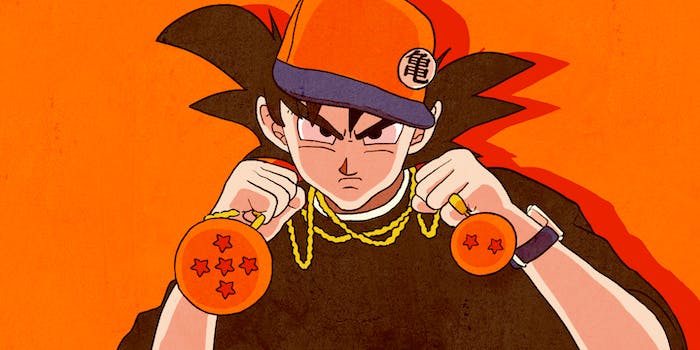 Why do rappers love ‘Dragon Ball Z’ so much?

A growing number of rap artists are looking to Goku and his fellow Saiyan for inspiration.

“I relate to Goku because I’m the protagonist in my own story,” Minneapolis rapper Finding Novyon tells me.

He’s explaining the influence Dragon Ball Z had on his recent Super Saiyan EP release. “Growing up and watching his character development and seeing the challenges he went through somehow helps me with my problems or challenges in the real world. It inspires me not to give up, and to always remain a decent person in the process.”

The confluence is more than a coincidence. Numerous rap artists over the years have referenced or homaged Dragon Ball Z or its characters in their songs and albums, from B.o.B to Soulja Boy.

In a 2015 interview with Inverse, Adult Swim creative Jason DeMarco, who worked on Cartoon Network’s Toonami when Dragon Ball Z aired in the ’90s, revealed that the show’s viewer demographics skewed towards young boys of color. When the kids who grew up watching DBZ started building their own musical landscape, they filled it with references to Goku, Vegeta, powering up, going Super Saiyan, and more.

Often the references are oblique or inferred. “I fuck with the track but what this gotta do with my favorite DBZ character?” asks one commenter on Lil Uzi’s single “Super Saiyan Trunks.” The best answer according to YouTube upvoters:

“Uzi is an upcoming underground artist right now and alot of people are sleeping on him…just like vegeta thought his son trunks couldnt go super saiyan..then he did lol.”

This idea of going Super Saiyan pops up over and over again in hip-hop. “I’m turnt up like Goku / I’m Super Saiyan,” sings Rich Homie Quan on “Last Week.” On “Awesome,” a litany of pop culture references, XV announces he’s risen above the drama with, “And even through the hating and wars they thought I stay in / Who you playing, I done went Super Saiyan.”

Again and again, today’s hip-hop artists talk about the “Super Saiyan” moment or act of leveling up and one-upping the competition. And even when that idea gets subverted, as with Christian rapper Aha Gizelle’s “Super Saiyan,” the theme of artistry infused with higher superpowers is clear:

Finding Novyon tells me it’s natural for rappers to identify with going Super Saiyan. “Goku had to suffer a significant loss before he snapped and leveled up. I feel like for a lot of different artists that moment replays in everyone’s head. As rappers we all want our rivals and adversaries to know we aren’t forces to fuck with.” Just listening to Shizzy Sixx’s litany of adversarial combat on”DragonbarZ” feels like watching an anime fight scene level up:

Powerful but slept on
Like Gohan, bitch
I’m out to shake the world up
Like Gohan pissed
Uhh every time my rhyme’s danger
Like I spent 12 years writing
Inside the hyperbolic time chamber
Hero, with the speeds of a villain
Bound to blow the fuck up like Freiza did Krillin
I’m killing all you niggas
Cloning like Cell junior
Click booyah
Nigga my clique will rip through ya
Who ya
Just a civilian claiming he a monster
Talking till he gets fucked upLike Yamcha
Suicide, that guy, haters wanna be him
Cause I got my third eye open
Like Tien

Most rap artists never get this direct about their DBZ influences. “I don’t really think about incorporating the aesthetic as much when I’m recording my music,” Novyon said. “I think that in Hip-Hop, you have to be cautious when it comes to that, because it’s really easy for you to make it corny.”

Lil Ceno and Lil Trav, the bop artists behind Sicko MOBB, tell me they keep theming their mixtapes around DBZ because it matches the mood and matches their goals. But even though their references are pretty meta, Japanese culture and anime in general have had a huge influence on their breezy musical style and pop-infused beats.

“We don’t ever force the DBZ references or feel,” Trav said. “It’s just so into our everyday lives we breathe it, so if it come out its not forced … The whole Japanese sense of style, dress, and culture as influenced us for sure.”

“We themed [our music] around DBZ because of their endurance to fight and how long they can use their super strength,” Ceno said. “That’s why we make turn-up music—we want our listeners to enjoy themselves and turn up to the max like you’ve never done before.”

Like many artists, Ceno and Trav both grew up watching Dragon Ball Z—they’ve been fans of the show since they were 6 and 7. “It’s also metaphorical for us, too,” Ceno said. “We grew up watching DBZ and would love to see them Super Saiyan, and just when you thought Goku was done he took it to another level.”

“That’s what we do with our music—our rapid pace beats and melodies leave the crowd exhausted when we’re done. Super Saiyan represents the level of intensity we’re trying to apply on the game.”

“I think that the series and its characters really appeal to rappers in this generation, because it’s what we grew up watching,” Finding Novyon tells me. “The series has this motif of working hard, and training to become the strongest you can become. I think that for many rappers that motif is very easy to relate to. Almost like how basketball is a common metaphor in Hip-Hop.”

Novyon is one of a growing number of rappers like XV, Shizzy Sixx, and other rappers who proudly fly their blerd (black nerd) colors. As a kid growing up in Minneapolis, he loved anime and used to create his own manga. “Anime in general was a big part of my life and culture. I was into all of the popular anime, from Naruto to Full Metal Alchemist to Inuyasha, even Yu Yu Hakusho and Cowboy Bebop.”

Like many other hip-hop artists with geeky tastes, he’s incorporated a childhood spent feeling like an outsider into his music. “I was made fun of a lot … especially [by] my fellow African-American peers … or viewed as weird for not really caring about what came on 106&Park, but rather caring about what the Toonami line-up was gonna be.”

On his Super Saiyan EP track “Kamehameha,” Novyon sings wryly, “Back up on me once I step into the building / everyone I went to high school with got children.” In a way, the embrace of anime by hip-hop represents a kind of victory over a mainstream culture that shunted geeks to the side. We’re well past the moment when Childish Gambino was a lone voice repping nerddom to the rest of hip-hop culture. These days your hip-hop squad goals are just as likely to include a round of gaming or a marathon of One Punch Man.

But of course, ultimately, it’s still all about power—or rather, the path to achieving that power. “I feel like at this point in my life and my career, it’s time for me to really show everyone what I can do and what I’m capable of doing,” Novyon said.

“Everything up until the past year of my life has been sort of like training. And now that I’m reaching a bigger audience and facing bigger challenges, I think [about] showcasing my power—lyrical, vocal, and audible ability—[and] what I’d have to do to defeat my foes, which are just my personal insecurities, haters, etc.”

Novyon and other DBZ fans understand that the point of going Super Saiyan is that there’s always another saiyan level to achieve—just when you think you’ve gone as far as you can go, you reach a whole new level. But you can only get there through following Goku’s path of “constant hard work and enthusiasm to test his limits.”

“For me, I want to embody the journey,” Novyon says.

Luckily for anime fans everywhere, he won’t be alone.