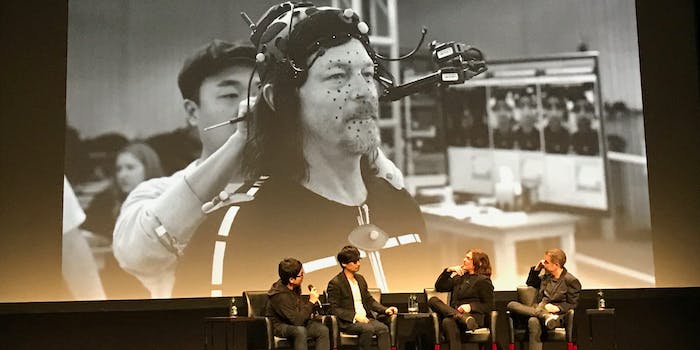 'You're connecting the game and playing together and everyone will be connected together.'

The Tribeca Film Festival on Thursday hosted a conversation between the famous video game director Hideo Kojima and Norman Reedus, who stars in Kojima’s upcoming game Death Stranding. While they couldn’t reveal much about the game itself, they provided more insight into their relationship with one another, the process of making Death Stranding, and the themes of the game with an emphasis on its connections.

The connections within Death Stranding are vital. Players will have to reconnect the world within the game itself, and the decisions to connect or disconnect will have players question if they did the right thing.

“You’re connecting the game and playing together and everyone will be connected together as well,” he said.

He described Death Stranding as an open-world action game, which has a“playground of possibilities.” You’ll be able to have the choice to walk around in the world, but you won’t be able to proceed in the story until you engage with those story mode elements.

But what the conversation between Kojima and Reedus emphasized is how much of a collaborative process it can be. Reedus, who first learned about Kojima through beloved director Guillermo del Toro (who Reedus says cast him in his first movie and is also appearing in Death Stranding), noted that when he asked around about Kojima, people were freaking out. Shooting and recording for his character had been a completely new experience for Reedus, and he added that Kojima would make a great director.

“During a recording session, Norman gives a lot of ideas to me,” Kojima said. “I have an image at the start. Everyone thinks I’m a perfectionist but I like a lot of things live, so I want to do a collaboration. I feel that with Norman. When Norman has an idea, I give an idea back.

“It started to piece itself together,” Reedus said of Death Stranding. “It’s inspirational. I don’t want to say anything to give anything away, but it’s a different way of thinking.”

Everything that Kojima does “is 1,000%” according to Reedus and players will be able to see that in the detail of Death Stranding. The initial creation of Reedus as the character Sam in the game includes Reedus’ tattoos, but when Reedus got even more tattoos since that first scan, Kojima added them in; they even joked about adding additional tattoos onto Reedus’ character in an update if Reedus got more tattoos once the game is out.

One thing Kojima and Reedus can both agree on is how emotional Death Stranding may make players. Reedus says that you “get emotionally involved in so many ways” while Kojima highlighted that players will be “emotionally tied” to the game, which will grow with decisions, connections, and emotional attachments.

More recent photos. When asked if del Toro had a role in #DeathStranding, Kojima just smiled and nodded #tribeca2019 pic.twitter.com/GT4KPPs3uT

Although Kojima apologized to fans who showed up for the conversation for not having any footage or images to show them, he offered them hope that new information might be on the way soon.

“I’m sorry that I couldn’t show you stuff today,” Kojima said at the end of the panel. “Maybe in a month or so. Maybe?”