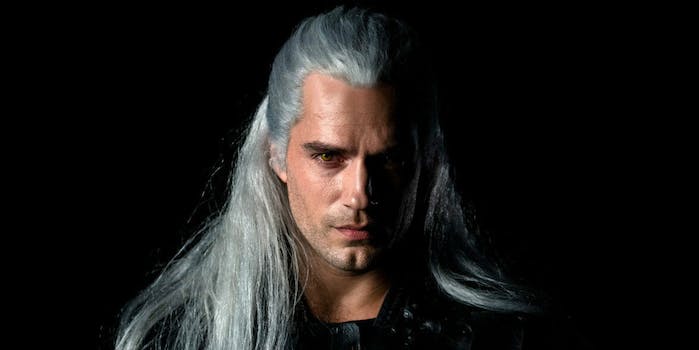 Lucius Malfoy would be proud.

The internet finally has its first official look at actor Henry Cavill as the Witcher, aka Geralt of Rivia, and people have plenty of opinions.

Netflix is currently producing an adaptation of the Witcher series, which began life as a series of (ongoing) Polish books before becoming a highly acclaimed role-playing video game. Netflix debuted the first look via Twitter, featuring Cavill in armor that looks similar (although not quite identical) to Geralt’s iconic gray chainmail and leather outfit, as well as shimmery white hair that would make Lucius Malfoy blush.

Get your first look at Henry Cavill in The Witcher! pic.twitter.com/1O2eWS1MkP

It’s worth noting that Cavill’s look here aligns far more with the books than the games, where Geralt has multiple facial scars and shoulder-length hair. By the third video game, Wild Hunt, an older Geralt has a beard by default. We can see Cavill downing what looks like a potion bottle, so odds are Geralt’s image may change over the course of the series, as potions in the Witcher universe are highly toxic and dramatically alter Geralt’s skin.

It’s definitely a unique stylistic choice; one that’s likely influenced by whatever narrative changes the showrunner chooses to make. But that didn’t stop the internet from serving up some hot takes and cracking wise at the Butcher of Blaviken.

First came the visual comparisons, including one notable former Slytherin.

Who wore it better? pic.twitter.com/AWIR86V2sl

I can't believe the studio did this to Henry Cavill AGAIN! Here's the undoctored photo of him in The Witcher. pic.twitter.com/cPHwsHx1xi

Then there were the more defensive memes, which rightfully called out the hypocrisy of some fans who cried foul when a rumor surfaced that the actor playing Ciri (commonly depicted as a thin, white woman) may be a person of color.

"That isn't canon, Ciri needs to be white!" *pitchforks*#Witcher fans when Cavill is shown without a beard:

"Who cares about canon, give him a beard!" *pitchforks* pic.twitter.com/ebA9mekDD9

be careful who you make fun of in witcher school pic.twitter.com/tasMwngTs2

Stop bullying Henry Cavill y'all. His Halloween costume of Geralt-made-in-Soul-Calibur-VI-character-creator is pretty true to form

Netflix’s Witcher adaptation is set to be released in 2020, according to showrunner Lauren Hissrich. The series will be eight episodes long, a little shorter than Netflix’s average 10-episode runtime. Hissrich is joined by fellow writers Jenny Klein (Jessica Jones) and Sneha Koorse (Daredevil).