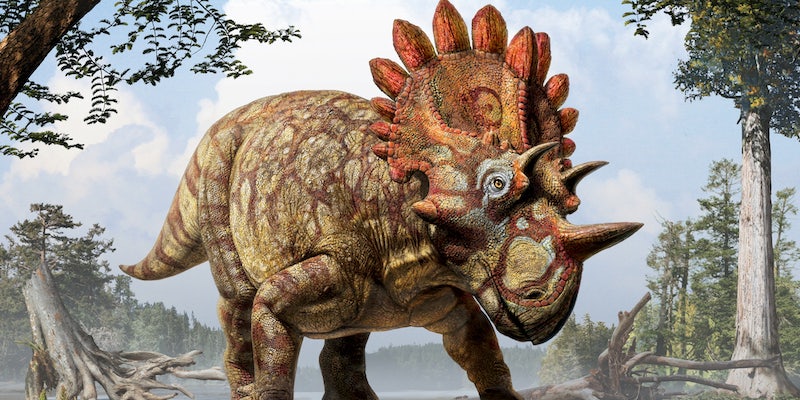 Scientist discovers awesome Hellboy dinosaur, and that’s not even the best part

Guilermo del Toro is already hard at work on the film version of the coolest proposal in geek history.

What cosmic timing: The day after Ron Perlman asks the Internet to support Hellboy 3, the earth itself reveals the best prequel ever, a dinosaur bearing his name. It’s so awesome, it led a scientist to propose marriage via the research paper announcing his discovery.

Hellboy is the coolest thunder lizard ever to walk the earth, judging from this artist rendering. The dino apparently descended from the unholy union of a Triceratops and a ‘70s-era jungle room: 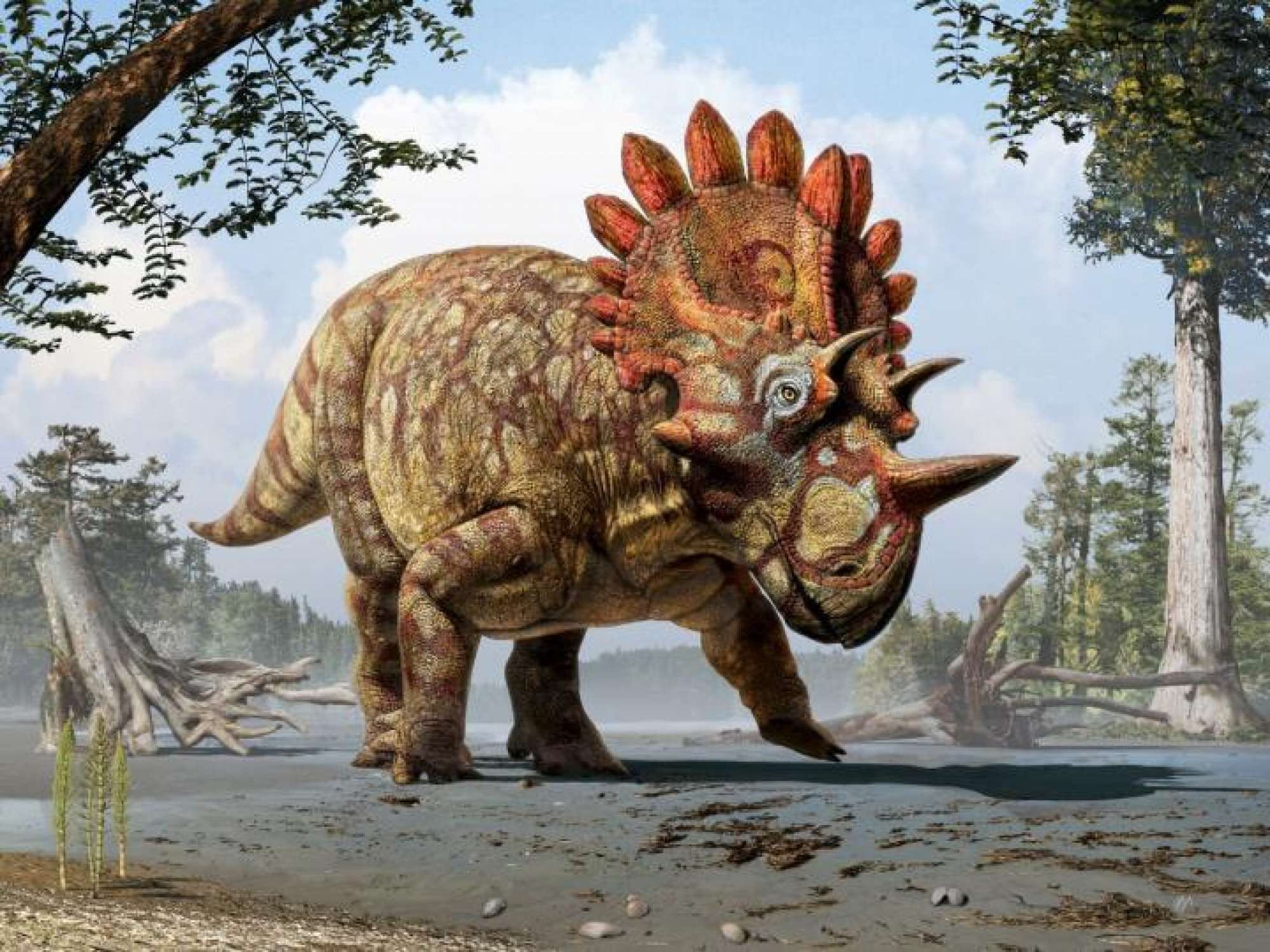 You might think that Regaliceratops peterhewsi‘s cute little horns earned him the nickname “Hellboy,” but according to the Royal Tyrell Museum, where the skull that led to the discovery is located, the name actually came about because of “the combination of difficult excavation conditions and hardness of the rock surrounding the skull.”

Though he’s undoubtedly related to Triceratops, he’s a whole different species, a member of the Chasmosaurine subfamily of horned dinosaurs (Triceratops is a member of the Centrosaurine subfamily; they’re basically cousins once removed on the dino family tree). As Eureka Alert notes, the dinosaur was initially discovered in 2005 when a man named Peter Hews, taking a walk along the Oldman River in Alberta, Canada, nearly tripped over a major find—a fully intact skull so massive it had to be airlifted out of the field: 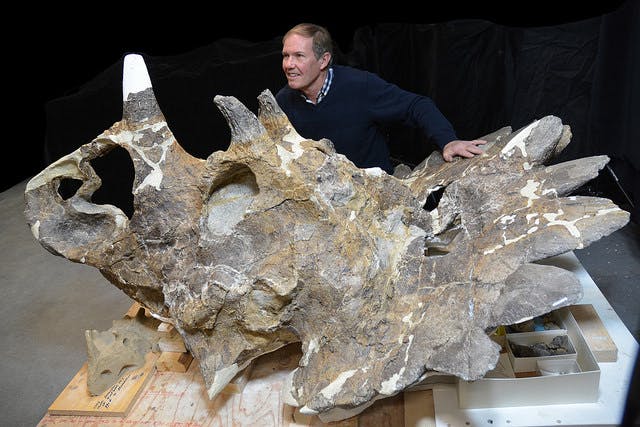 Photograph of Peter Hews with the skull of Regaliceratops peterhewsi that he found.

As you can see, while Hellboy looks a lot like Triceratops, he’s lacking the distinct large horns above his forehead, and his head plate is frilly instead of solid: 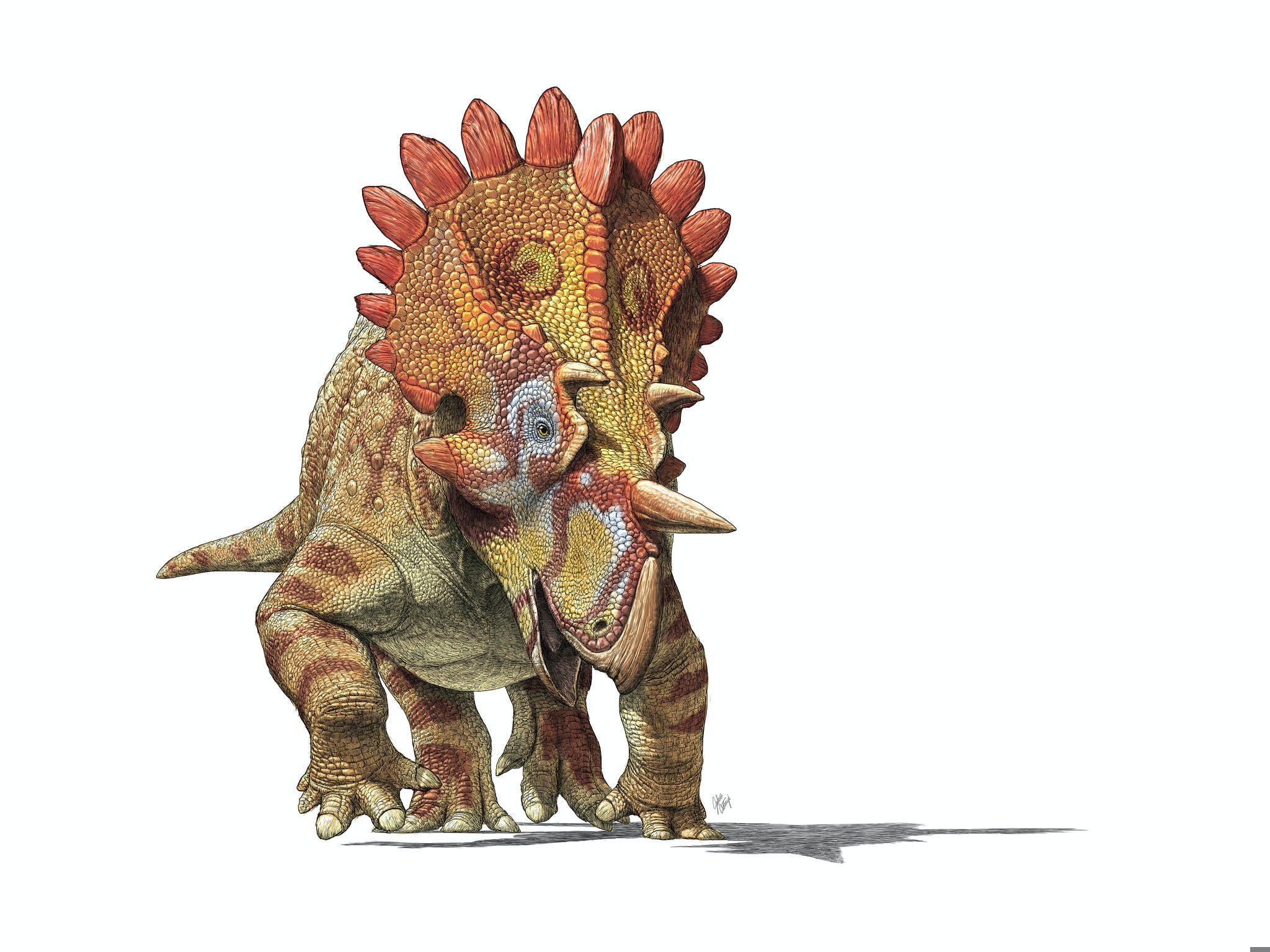 The announcement of the dinosaur comes just a week after the Royal Tyrrell Museum played host to another prehistoric find—five fully intact bony fish fossils discovered by a creationist.

Among the endlessly cool things about this discovery, from the intact skull to the swag nickname to the baseline fact that dinosaurs are always cool, is that it came with a sweet surprise. The two researchers heading up the 10-year-long investigation into the skull were Dr. Caleb Brown and Dr. Donald Henderson, who bears the unbelievably awesome job title Curator of Dinosaurs. After finally publishing their findings in Current Biology,  Dr. Brown appended the following footnote:

C.M.B. would specifically like to highlight the ongoing and unwavering support of Lorna O’Brien. Lorna, will you marry me?

And the single best part of this discovery?