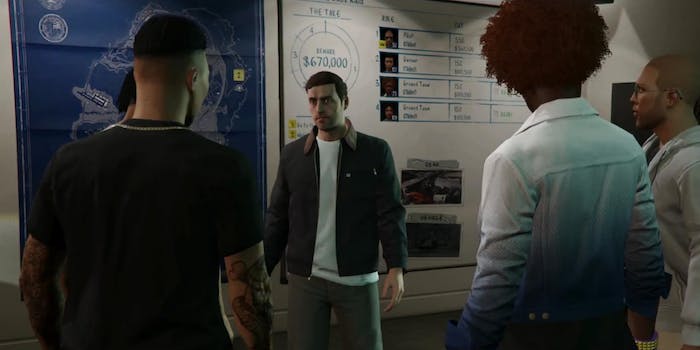 It's time to polish up your shooting and driving skills.

Grand Theft Auto Online players, rejoice. You’ve been waiting far too long for Heists. You will also, hopefully, be about to learn why one should always bet on Rockstar.

Imran Sarwar, the producer of GTA Online at developer Rockstar Games, in an interview with IGN has has finally lifted the veil on where things stand in the development of Heists. Sarwar has revealed a wealth of information that demonstrates why GTA Online players have been so anxiously awaiting the arrival of this new content.

The new Heists trailer published today on YouTube gives GTA Online fans tantalizing hints to get excited about, like the inclusion of computer hacker and heist planner Lester Crest and tax accountant-turned-conspiracy theorist Ron Jakowski; as well as multistage planning that will bring a level of cooperative play and complexity that’s been missing from GTA Online since the game launched in October, 2013.

Heists in Grand Theft Auto V are large-scale thefts that require a series of preparatory steps before the theft can be attempted. Each job requires a driver, gunmen, and a computer hacker—all of whom receive a cut of the take from the robbery. Preparatory steps can include readying getaway cars, hijacking convoys, and procuring disguises. The Heist itself can require players to hack traffic lights to keep law enforcement off the trail of the escaping robbers, airlift vehicles with helicopters, and fight their way out of standoffs with the police, all in the same theft.

To plan a Heist in GTA Online, a player requires a high-end apartment that includes a planning space. The player in charge of the Heist gets to assign responsibilities to everyone on the job, and also needs to front all the cash required to execute the plan. Crew members on the job will make money by executing preparatory steps before the actual Heist is attempted, but the player in charge of the Heist only gets paid when the job is successfully completed.

“Prep and setup missions in Story Mode could be relatively low-key affairs, but with four players and an emphasis on replayability we felt like we needed to make these as diverse and as fun as possible,” Sarwar told IGN. “This required a totally new way of testing as we formed into teams and played and replayed a huge range of scenarios in order to make sure the balance and timing of each section felt right.”

Rockstar has finally come clean as to what’s been taking so long: “As it turns out, creating missions of that complexity for multiple players at the same time was much more difficult than we anticipated and every time we thought we were close, something would send us back to square one. Having already let players know of our intentions with Heists, every setback only increased the pressure to make sure we got them right,” said Sarwar.

GTA Online is set in the same state of San Andreas and the same city of Los Santos as in Grand Theft Auto V. Players have the same television and radio stations, convenience stores, and airports to steal helicopters and planes from. All of this is a playground in which players can indulge in mayhem, turning the open world of GTA V into a free-for-all of stabbing, shooting, and explosives.

Structure in GTA Online is provided by Jobs, instanced copies of the world in which only the participating players are present. Deathmatches, air, land, and sea races, assassination missions, and robberies are all activities offered in Job lists. GTA Online players can also build their own Jobs, some of which are approved by Rockstar and then appear in official Job lists in game menus.

Even with a growing amount of player-created content, after a year GTA Online can feel stale for veteran players. GTA Online players will have to be patient for just a little longer, as Rockstar says Heists will be ready in “early spring 2015.”

“Right now we just want to get Heists out there and get real world feedback before we look too far ahead,” Sarwar told IGN. “Reaching this point has obviously taken much longer than we ever thought it would and we know we have a lot to live up to, but we’re looking forward to finally being able to share them with other players soon.”