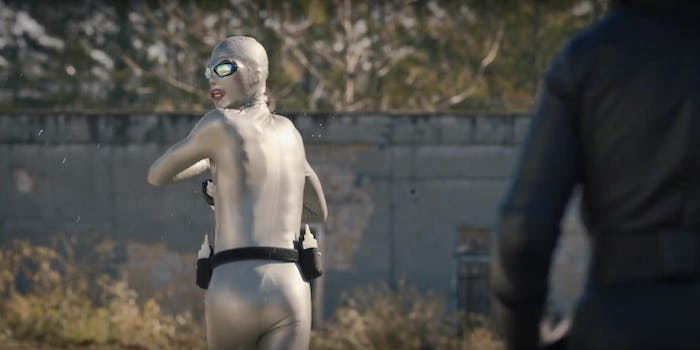 Watchmen's weirdest vigilante was seemingly unmasked by the FBI.

Following the explosive finale of HBO’s Watchmen on Sunday night, fans had one question on their lips: But who is Lube Man!? Okay, maybe not just one question, but still. Introduced in episode 4, the masked vigilante known as Lube Man—a skinny guy in a silver morph suit, carrying bottles of lubricant at his hips—appeared for just one scene. Fleeing Angela Abar, he slithered away into a storm drain and was never seen again.

Fans speculated that Lube Man was the superhero alter-ego of Agent Dale Petey, Laurie Blake’s nerdy FBI sidekick. He has the right body type, and the guy is totally obsessed with masked crime-fighters. He’s also the person behind HBO’s file of in-universe info documents, Peteypedia, and if you’ve been reading along, you’ll know he has strong opinions on superheroes. So, it feels appropriate for his identity to be revealed in the show’s final Peteypedia entry.

While previous FBI memos were akin to wordy blog posts from Petey himself, the final one is from Deputy Director Farragut. It informs us that Petey has been fired from his post with the FBI, and that Laurie Blake has been retrieved for a top-secret debriefing after what went down in Tulsa. It also advises other agents to ignore any “hoaxes and conspiracies linked to our Commander in Chief,” suggesting the American public still face an uphill battle to accept reality.

The most important detail, however, appears in a description of what the FBI found in Petey’s belongings: canola oil. He’s also described as being “at risk for vigilante behavior.” It’s simple enough to put two and two together here, and arrive at the conclusion that Petey was indeed Lube Man, slathering himself in canola oil to… do whatever it was he was attempting to do.

In some ways, Lube Man the perfect example of a Watchmen-universe superhero: a useless weirdo with no apparent impact on crime or public safety. We can only imagine what his origin story must be like. Perhaps we’ll find out if Watchmen returns for a second season, but to be honest, some things are better left a mystery.