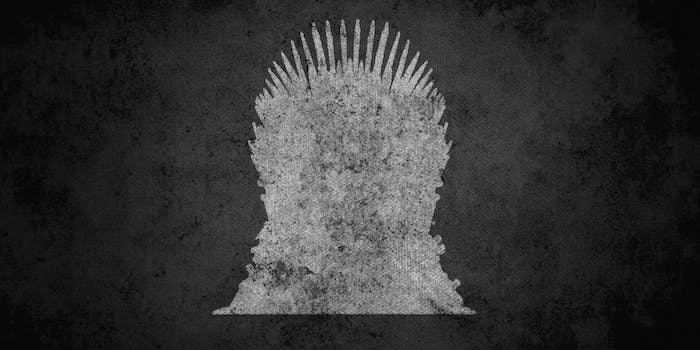 HBO shuts down screenings of ‘Game of Thrones’ at Brooklyn bar

The Videology bar got a Cease and Desist letter from HBO.

Thanks to an HBO crackdown, a popular Brooklyn bar’s showings of Game of Thrones are getting the axe—just like a certain character from a show you won’t be able to watch there anymore.

And whether HBO will follow up the move by shutting down similar bar-hosted watch parties across the nation is anyone’s guess.

But winter has finally come for one of those TV nights: The Village Voice‘s Lara Zarum reports that HBO has issued the bar a Cease and Desist order to halt its showings of Game of Thrones on the basis of copyright infringement.

Sorry guys. No Game of Thrones showing tonight. Or ever. Not our choice. #WinterIsHere

The bar’s co-owner, James Leet, told Zarum that although they regularly show other TV episodes at the pub, it was the first time they’d been asked by a show’s copyright holder to stop.

A spokesperson for HBO told Yahoo News that “As a pay subscription service, HBO should not be made available in public establishments. When it does happen, it is of particular concern when there is an attempt to profit off the programming. This is nothing new as we have taken such actions for well over a decade.”

You may think viewing an episode of TV at a bar would be the same as watching a live sporting event with your friends. But most bars pay licensing fees through a network package or a service like DirectTV in order to host these live events. There’s no equivalent licensing structure in place for HBO’s episodic television.

HBO is perfectly within its rights to protect its copyright, especially when a bar is using Game of Thrones as an attraction that will result in the sale of food and drinks. But the move to halt the showings hasn’t endeared it to local fans. The network had no comment to the Daily Dot regarding plans to contact other establishments that air the show to an audience.

Public screenings at bars are just one of the ways fans have used to circumvent an HBO subscription on cable. Cord-cutters complained for years about the lack of an online-only subscription option for HBO, which the company recently rectified with the launch of HBO Now. Still, many people believe the leak of the first four eps of the series just a day before the fifth season premiere was meant as payback in response to dissatisfaction with the new service. For the moment, HBO Now is exclusively available through computer browsers and to consumers with new Apple TVs. Game of Thrones‘s status as one of the most-pirated shows in history has long been seen as a response to the lack of a convenient a la carte service, which HBO Now only partly provides. HBO has said additional streaming options are forthcoming.

Meanwhile, the company is cracking down on unauthorized showings; last week it was battling Periscope users who were releasing unauthorized streams of the latest episodes online as they aired.

Regardless of the show’s rampant problems with piracy and unlawful viewing, the popular consensus is that HBO has picked the wrong target for its ire. The community tradition of gathering at the local pub for the big game—in this case, the game of thrones—runs long and deep. Whether it’s board games, viewing nights, or beer tasting, New York’s bars have evolved to serve their local denizens of Westeros. And with interest in Game of Thrones at an all-time high, New York is a mirror of similar events around the country.

Some bars even stocked up on official brand of Game of Thrones beer as part of their viewing nights. Even if bar managers didn’t know they were breaking copyright law with their watch parties, the lack of a public-viewing license option leaves them no way make good without stopping the events altogether.

Fans were not happy about the news that their beloved Videology viewing parties were getting shut down:

.@HBO seems to have missed a great PR/fandom opp with the @Videology cease & desist. Capitalize on the interest of your customers! Interact!

@Videology My best GoT viewing experience ever was at Videology. I hope @HBO rethinks this litigious folly. https://t.co/mxQ7iKVYOB

So disappointed in @HBO stopping Videology from screening GoT.

For its part, the bar displayed good humor about the whole thing.

Our DVD pick of the day is GAME OF THRONES! Just kidding. It's Robert Altman's CALIFORNIA SPLIT. #vidpix pic.twitter.com/tjezzTR60u

But, like HBO finally responded to consumer requests for an option to pay for online-only streaming, perhaps the company will create a way for bars and restaurants to legally screen the show for a crowd. Then we can have our Game of Thrones, and drink to it too.

Photo by by Max Fleishman