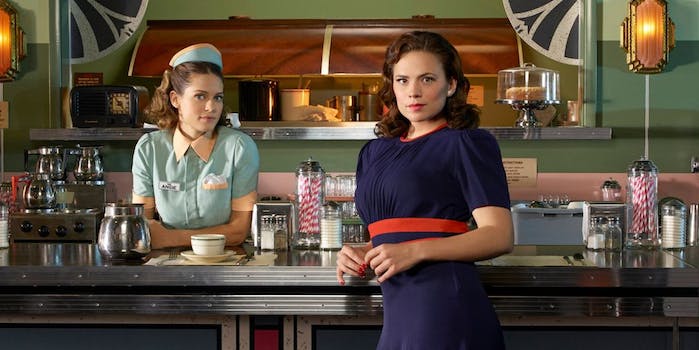 The case for Hayley Atwell to star in ‘Doctor Who’

Face it: She's perfect for this role.

Sure, that was just a throwaway reply to a fan asking if Atwell would like to be on Doctor Who. But now we can’t stop thinking about how perfect she would be as the next Doctor after Peter Capaldi. Let’s take a look at the evidence:

1. She’s the perfect combination of dramatic and goofy.

The Doctor is a demanding role that combines child-friendly silliness, sci-fi stunts, and serious drama. Judging by Atwell’s career in British historical movies and starring role in Agent Carter, she’s an ideal choice. Peggy Carter is a badass hero with an intensely emotional backstory, but Atwell’s behind-the-scenes antics are exactly the kind of behavior we’d love to see in the TARDIS.

@HayleyAtwell using the Howard stark Hoover which blow dries whilst feeding the newborn.The product failed in the US pic.twitter.com/jzJIzAN7pS

Doctor Who only films about 12 episodes each year, and a lot of the lead actor’s job is to act as an ambassador for the show. This means zillions of promotional interviews, charity events, and showing up to conventions like San Diego Comic-Con. As a veteran of the Marvel Cinematic Universe PR machine, Hayley Atwell already has this in the bag.

3. This Rose/Doctor fanfic basically writes itself.

Atwell has already voiced several characters in the Doctor Who Big Finish audio plays, and we know from Peter Capaldi and Freema Agyeman that a minor role in Doctor Who can lead to a bigger part later on. Right?

5. Can you imagine her tweets from the Doctor Who set?

In the notoriously spoiler-averse world of Marvel movies, Hayley Atwell’s Twitter presence is a breath of fresh air. She constantly posts photos from the Agent Carter set, recruits A-list stars to join her for dubsmash lipsync videos, and answers hundreds of fan questions while keeping inappropriate followers in check.

The only downside is that for any of this to happen, Agent Carter would have to get canceled. And that is not allowed to happen.