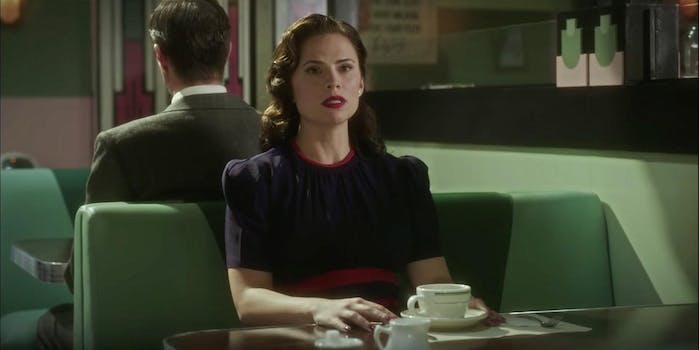 Agent Carter might have been cancelled earlier this year, but nothing can stop Hayley Atwell from being a national treasure who just keeps on giving.

In an interview with E! News at the 2016 TCA Summer Press Tour, the actress who played Peggy Carter on both the big and small screen revealed that she has kept a program from her character’s funeral.

Marvel fans will remember Carter’s touching funeral service in Captain America: Civil War. It turns out the service was just as powerful for its actors. Behind the scenes, Chris Evans sent Atwell photos of the cast filming. She told E! News:

“Chris sent me a picture of him filming my funeral. Like, ‘You look pretty hot when you’re old and dead … I went on set and I got her funeral program and I’ve kept it. It was great, she had a great turnout. She was obviously a very-liked lady. So I think she had a good send off.”

But more importantly, the Agent Carter actress admitted that she hounds Marvel studios co-president Louis D’Esposito on the regular about getting Carter her own movie. Atwell’s even interested in a film depicting the agent’s later life.

She said, “I think the great thing about Peggy is we know from the [the movies] that she lives a long life, so she can come back. I’m thinking—I’m banking on when I’m in my 50s, let’s see what Peggy’s up to in this decade.”

And we know diehard fans would most definitely wait for that.