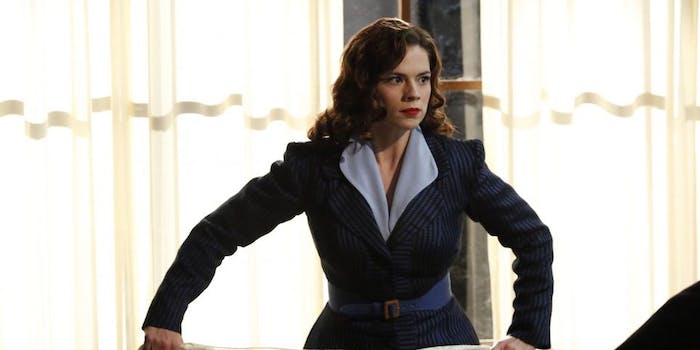 Marvel‘s lack of woman-centric merchandise has become an increasingly public problem, to the point where even Marvel Studios actors have complained about it. Clark Gregg (Agent Coulson) and Mark Ruffalo (the Hulk) have both tweeted their support for more Black Widow toys and merchandise, and now they’ve been joined by Agent Carter‘s Hayley Atwell.

Atwell and Gregg attended an ABC Studios event in London this week, promoting their respective shows and answering questions from fans. Both actors were asked about Marvel’s recent merchandise issues, with Atwell discussing whether Agent Carter might have a positive effect on Marvel’s attitude toward female characters.

“I don’t know if it’s going to change it but it certainly contributes a public platform to my quiet resolution to take over the world! The conversation between the creators and the audience is always an ongoing thing. They want to give viewers what they want, so it’s the responsibility of the audience to speak out about that. Peggy getting her own TV show came about through conversations with the fans who wanted to see more of her .”

Clark Gregg also spoke out about the importance of representing female characters, expressing support for a Black Widow movie. “It’s unacceptable,” he said. “I’ll tell you about my daughter who’s 13 now. I tried to get her to watch the first Agents of S.H.I.E.L.D., she looked at me like, “Ugh, Dad – it’s a boys’ show!” And then she got a look at Elizabeth Henstridge playing a biotech genius, and Chloe Bennet playing a computer genius, and Adrianne Palicki being a warrior, and now she’s right beside me with it.”

“Maybe when Agent Romanoff gets the film that she deserves, some of the merchandise will start to follow.”

Fortunately Marvel does seem to be taking a step in the right direction with the merchandise for Captain America: Civil War, which will apparently include more clothes geared toward women. There’s still no sign of a Black Widow solo movie, though.

H/T to The Mary Sue, Photo via Marvel