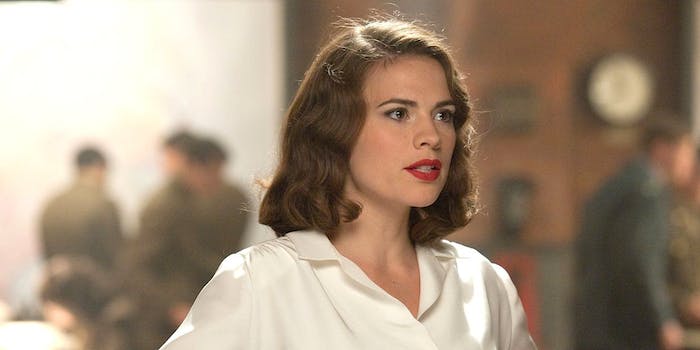 "Even though they’re strong you need to also see the messiness of everyday life, that complexity."

Of course, this kind of on-the-nose casting is partly because Marvel Studios hires actors who can cheerfully publicise their movies for months on end, without looking too bored. But it totally pays off, and Agent Carter’s Hayley Atwell is no exception. Not only has she played a WWII spy before in British espionage drama Restless, but she’s already in tune with the ongoing outcry from fans who are desperate for more female-led superhero movies.

Peggy Carter is precisely such a character, a commanding officer who helps to select Steve Rogers to be turned into a super soldier, and goes on to support him when he crosses enemy lines to rescue a friend from the Nazis. From her very first appearance on screen in Captain America: The First Avenger, Peggy Carter is very clearly the main character of her own story rather than bit-player in Captain America’s life.

None of Marvel’s female leads are exactly swooning damsels, but Peggy Carter has one specific quality that makes her a perfect candidate for the franchise’s first female-led TV series: We already know her superhero origin story.

Peggy Carter may not have any superpowers, but if you look at Captain America: The First Avenger, it’s as much of a heroic origin story for her as it is for Steve Rogers. In fact, in that regard it subverts one of the most overused tropes in the action movie genre: the fridged girlfriend.

Instead of rescuing his love interest from a supervillain or having to avenge her death, Captain America’s motivation is tied up in the kidnap and eventual death of his friend Bucky. So while Peggy Carter is technically his love interest (or alternatively, Steve is hers), from a storytelling perspective she’s more like an authority figure than a traditional female romantic lead. And from the point of view of her life story, Steve Rogers himself is the “fridged girlfriend.”

If you interpret the movie as Peggy’s origin story as a hero, Steve is the love interest who dies too young, inspiring for her to forge ahead with her life and become one of the founders of S.H.I.E.L.D., thus changing the Marvel universe forever. A few days before the Agent Carter TV series was announced, Atwell discussed this in a YouTube interview, speaking about how Peggy’s love and grief for Steve were a motivating force in her later life.

Atwell evidently has a far more complex understanding of female action hero roles than the simplified “sexy ass-kicker” description that often winds up being attached to characters like Black Widow or Peggy Carter. Kate Beaton’s Strong Female Character comic efficiently parodied this concept with its sarcastic tagline “Sexism is over!”, but there’s vanishingly little chance that Agent Carter will ever be mistaken for an example of this trope. Why? Well, for one thing, all previous appearances from Peggy Carter have indicated that in her world, sexism definitely isn’t over. Because it’s 1946. Hence why the main antagonist in her Marvel short film wasn’t a supervillain, but her misogynistic boss.

Inevitably, the publicity materials for Agent Carter will show Atwell wearing pristine 1940s red lipstick and holding a gun. An accurate representation of the character, but certainly not the whole story. Even in Captain America, Peggy Carter was more than this, but the rest was easy to miss if you weren’t paying close attention. As Atwell pointed out, the new TV series is a chance to flesh out the parts of the character that aren’t just about looking hot and being a super-competent spy. After this, hopefully fewer reviewers will talk about her character by comparing her to a pin-up.

“I think Natalie Portman said something brilliant about modern-day female action heroes,” Atwell told Hunger TV last month, “about how even though they’re strong you need to also see the messiness of everyday life, that complexity. Even with Peggy Carter… Can we see her have a really shit day, put her pyjamas on and eat loads of ice cream and weep into chick flick? Can we have her be neurotic, hysterical, funny, depressed and all those things that we all relate to that aren’t regularly depicted because they’re not seen as sexy or comfortable for men to watch and masturbate over?”

Essentially, this is every argument anyone has ever had about why heroic roles have to be given to a wider variety of characters, rather than just white dude protagonists like Captain America. Characters like Peggy Carter, Falcon, and Black Widow are popular, but they can never truly come into their own until they are allowed to be the main character in their own story, instead of the sidekick in somebody else’s.