Why does Hawkeye have a farm in ‘Avengers: Age of Ultron’?

This may be the only bright spot in an otherwise bleak movie.

There’s a running joke among fans of the Marvel Cinematic Universe that no one knows what Hawkeye has been doing for the past two years.

Back in 2012’s The Avengers, Hawkeye (a.k.a. Clint Barton) was brainwashed by Loki and then helped the other Avengers fend off the Chitauri attack on New York. Since then? Nothing. He didn’t show up in Iron Man 3 or Thor: The Dark World. No one so much as mentioned him in Captain America: The Winter Soldier, even Black Widow. Some fans were even hoping for some kind of cameo in Agents of S.H.I.E.L.D., but—so far anyway—no dice.

A recently released clip from Avengers: Age of Ultron may have answered everyone’s questions. It’s possible that Hawkeye spent the past two years on a farm. 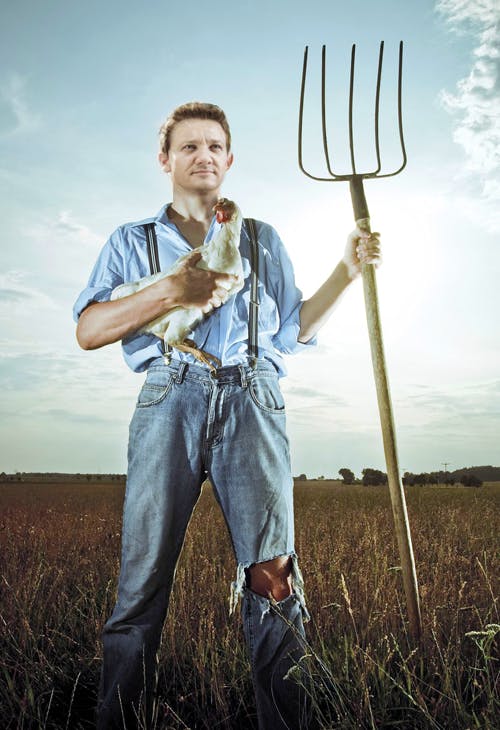 The clip was screened at Marvel Studios’ big press conference announcing their full slate of films through 2019. In the clip, Steve Rogers and Tony Stark argue while chopping wood, and apparently, this all takes place on Hawkeye’s farm.

The response from Avengers fandom was unanimous: What farm?

wait so Hawkeye owning a FARM and Steve ripping logs apart with his HANDS isn’t a JOKE???? I THOUGHT THAT WAS A JOKE. WHAT.

Marvel has not yet provided any further details about this farm. Unless it’s hidden away in a pretty obscure corner of Marvel canon, it’s not a concept adapted from the comics. As for Hawkeye’s personality, backstory, and career trajectory in the Avengers movie franchise, we know basically zilch. He spent most of The Avengers either brainwashed or fighting people or both, and all we really know is that he’s worked with S.H.I.E.L.D. for a while, and that he and Black Widow once spent some time in Budapest together. 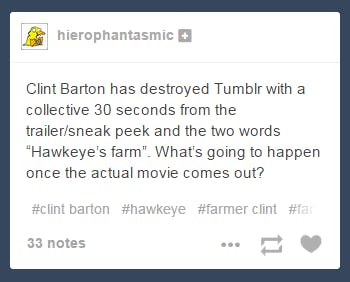 Oddly enough, MCU Hawkeye’s blank-slate nature has led to him becoming incredibly popular as a fanfic character, aided by the success of Matt Fraction and David Aja’s ongoing Hawkeye comic, which launched in 2012. The discovery of Barton’s farm was enough to send Marvel fans careening off in various directions as they attempted to explain why the hell a S.H.I.E.L.D. assassin would even have a farm, and, indeed, when he would find time to maintain it.

There’s the Black Widow/Hawkeye raising their kids on a farm theory. There’s the S.H.I.E.L.D. safehouse theory. There’s the tragic backstory theory, where Hawkeye’s abusive father left him the farm and he hasn’t been back since childhood. That last one may be the most likely, because a recent comic suggests that the Barton family lived in a rural house with a barn when Clint was a little kid. Maybe Avengers: Age of Ultron simply changed his backstory to give him an inheritance instead of a penniless orphan childhood. The franchise already includes numerous characters with daddy issues. 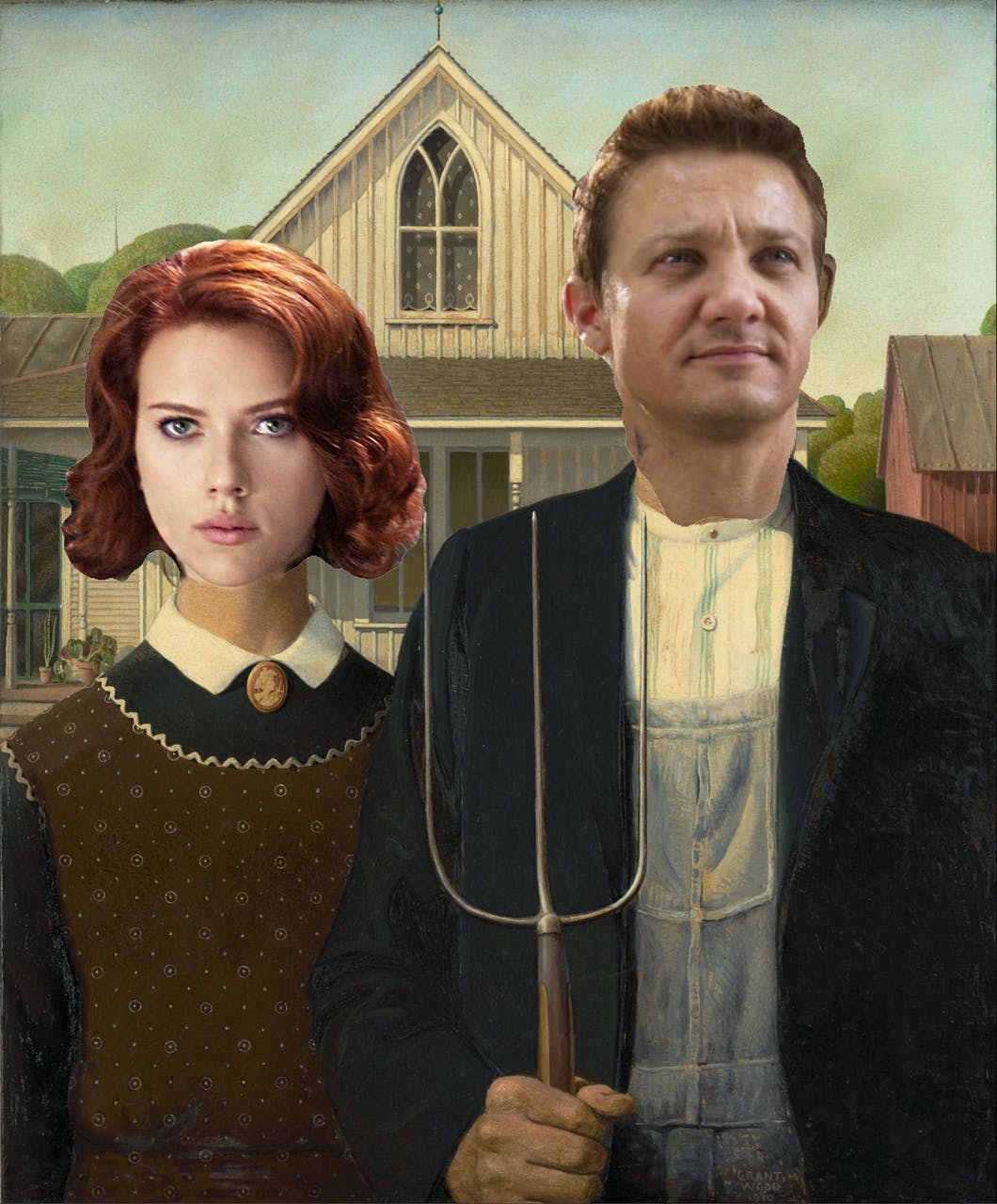 Still, there’s a certain “WTF” factor to the notion of Farmer Hawkeye. In the comics, Clint Barton was orphaned at a young age and wound up working in a circus alongside his brother, where he earned his title as the greatest marksman in the world. After that, he spent a while as a mercenary with Black Widow before becoming a S.H.I.E.L.D. agent and superhero. None of this really says “farmer,” but perhaps he was looking for some stability after that life of orphanages, circus tents, and running from the law.

One final—and surprisingly plausible—theory is that Hawkeye’s farm was inspired by Jeremy Renner himself. Marvel Studios is known for casting actors who appear to share many traits with their characters, and Jeremy Renner has joked in interviews about owning livestock.

Ever since Marvel revealed Hawkeye has a farm in the AGE OF ULTRON synopsis, the #FarmerClint tag has been a GIFT. pic.twitter.com/7Ts7HwWoMA

a movie that is the Hawkeye version of the Hobbit: Hawkeye is having a nice quiet day at his farm when all the other Avengers bust in

Whatever the canon reason for Hawkeye’s farm, it has certainly captured the hearts and minds of Avengers fandom. One reason might be that, because Age of Ultron promises to be a bonafide angstfest, and because the franchise as a whole is headed toward a Civil War story arc, Hawkeye’s farm is the one potentially uplifting thing we know about this movie so far. After two years of writing cheerful fanfic where the Avengers all move into Tony Stark’s New York skyscraper and hang out eating Pop Tarts together, loyal Marvel fans have latched onto farm jokes as a good distraction from the misery of the Avengers’ real future.

That is, unless Joss Whedon kills off Hawkeye in Age of Ultron, at which point fans’ newfound attachment to Hawkeye’s farm will only make the blow all the more upsetting. Sorry, Avengers fandom. You may be in for a rough ride.

it’s thursday, october 30th & we still don’t know what sort of livestock or crops hawkeye keeps on his farm. does he make artisanal cheeses?