Would you wear a couture dress inspired by Pan's Labyrinth?

While trying to think of interesting costume ideas for this year’s Dragon Con, illustrator Sara Richard came up with the idea of making high-fashion versions of Pan’s Labyrinth characters. She wanted to take on the challenge of making a terrifying character like the Pale Man the theme of a dress that would still be recognizable to fans of the movie.

“Then I figured, it’d be cool to try and come up with more designs for other movies, comics, TV shows, [and] anything pop culture-y in a fashion sense,” Richard told the Daily Dot.

“I wanted to start the blog to inspire other cosplayers to maybe look at presenting their costumes of their favorite characters a little differently and to show there’s no limit to cosplay and fashion,” she said.

Richard has more experience with cosplay than fashion or character design, though you can’t tell from looking at her art. She and her two best friends make up the cosplay group Human Sushi Cosplay. Due to their schedules, they only do a few major shows now. Richard keeps the excitement alive by designing costumes when she can’t work on creating one. She’d love to try cosplaying all the designs on her blog at some point, though in particular she would love to do Doc Brown and have one of her friends dress as Marty.

Character and fashion design are areas she has always loved, though Richard said she’s still learning how to illustrate functional pieces of clothing. 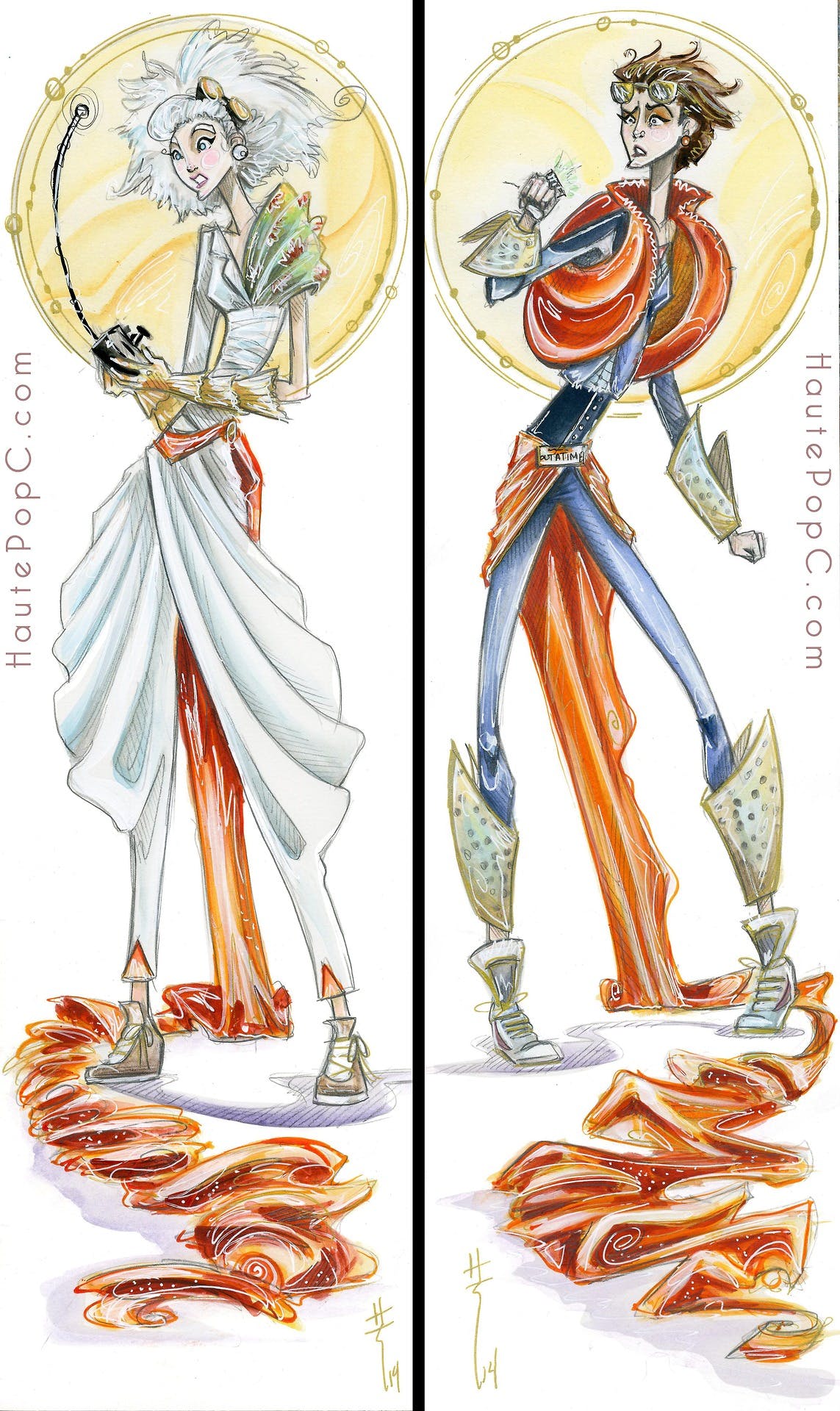 Back to the Future’s Doc Brown and Marty

“I feel like some of the HautePopC designs posted so far still need tweaking in terms of them being actually wearable. So I’m working on those skills!” she explained. “Character design kinda falls in there for me as I’ve always loved creating characters for short stories I come up with. I went through a major fanfiction phase in high school and yeah, I made some new characters I would love to fill the shoes of in my favorite fandoms.”

Richard plans to update the blog every Sunday with new designs and has so far shared 10 designs, plus a tease for some Godzilla couture to come this weekend. While we’ve seen Disney and video-game characters get high-fashion redesigns before, there’s something unique about Richard’s twists on these pop culture characters that makes us eager to see what she plans to do next. 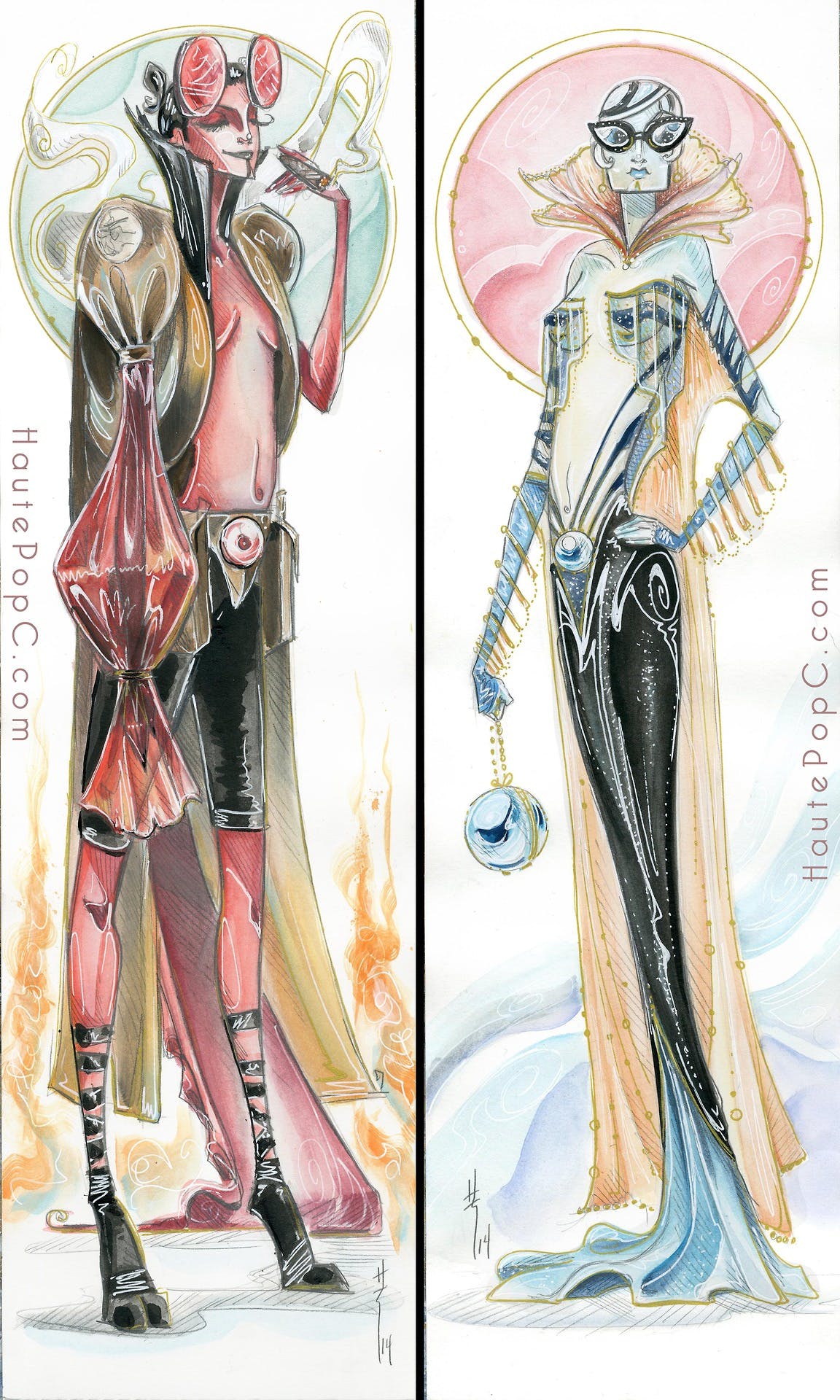 Her work is a great example of what can happen when fashion and pop culture collide, something more people seem to be realizing recently. Between Preen and Rodarte’s Star Wars designs on the runway earlier this year and San Diego Comic-Con partnering with Her Universe for the first-ever, geek-couture fashion show, there appears to be a growing trend of fashion designers embracing their fandom passions in some creative new looks.

Richard says pop culture and fashion are the perfect pairing.

“In comics and fantastical movies you have costumes that are already very high-fashion, it’s just being worn by a green, scaly super villain that I think for a while fashion designers didn’t think they’d be taken seriously making the close connection. But with the rise of comic movies and shows like Game of Thrones, it seems the big designers are finally able to say ‘Oh…yeah OK,’” she said.

Richard will continue to post to HautePopC every week for as long as she can, and hopes her work will inspire others to try their own designs and send them to her to share on the blog.

She also has plans for some more humorous designs that will give her a challenge like Sesame Street’s Bert and Ernie, and The Muppets’ Beaker and Professor HoneyDew.

“I love creative but recognizable cosplay that makes me want to reach for a camera so that’s what I have in mind whenever I draw something up,” she said.