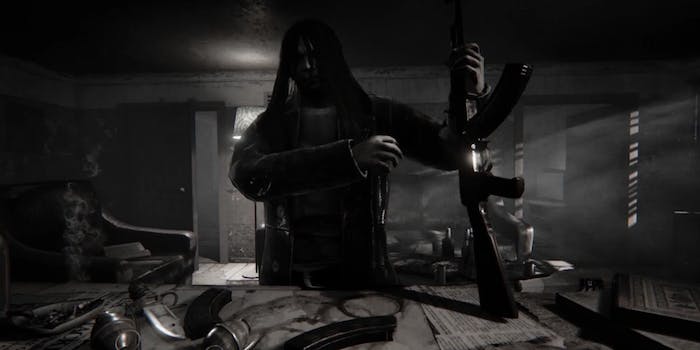 Gruesome trailer released for Hatred, a game about mass shootings

A Polish game studio has taken violence in video games to a horrifying new level.

If only the trailer for Hatred released today was a joke. It is so insanely, bluntly sociopathic that it could easily be parody.

Hatred is a third-person shooter in development from Polish studio Destructive Creations. The story is about a maniac who decides to indulge in his sociopathic anger and to make everyone pay. It is written straight out of the Elliot Rodger playbook, the shooter in the Isla Vista massacre who recorded a manifesto expressing his hate toward women and the men they dated.

In fact it smacks of every mass shooting in the United States since the Columbine massacre in 1999.

The trailer for Hatred is so blatantly, insensitively violent that at first glance it could be taken for political and cultural commentary. The font for the game title bears a striking similarity to the font used in advertisements for the video game Doom, which is widely regarded as the game that kicked off the first-person shooter genre in 1993.

The Hatred trailer may be intended to elicit a conversation about how much is too much when it comes to violence against civilians in video games. The “No Russian” level in Call of Duty: Modern Warfare 2 involved a group of terrorists mowing down civilians in a Russian airport.

The “No Russian” level was decried by social critics as indefensible. Others argued that in the context of the game it was reasonable. Call of Duty: Modern Warfare 2 is about a terrorist attempt to inspire a war between Russia and the United States. The shooting at the airport is pinned on a C.I.A. operation gone bad, which provides the spark for the war.

A game like Hatred, then, raises the question of where the line is drawn. People are shot in the Hatred trailer while begging for their lives. How different is that from civilians trying to crawl out of the line of fire after being shot in the “No Russian” level? Is Hatred meant to force viewers to think back to that debate over Call of Duty: Modern Warfare 2 and rethink their positions?

Perhaps, as mass shootings are largely an American phenomena, Hatred is meant to be a political statement about violence in the United States, created from an outsider’s perspective?

“The question you may ask is: Why do they do this? These days, when a lot of games are heading to be polite, colorful, politically correct and trying to be some kind of higher art, rather than just an entertainment—we wanted to create something against trends. Something different, something that could give the player a pure, gaming pleasure. Here comes our game, which takes no prisoners and makes no excuses,” reads a statement on the Destructive Creations site.

But that also suggests potential intention. An aspect of the current Gamergate argument is that core gamers are upset at critics for looking at video games as anything other than for fun. Now a video game pops up which identifies a game about sociopathy and mass shootings as a pure, gaming pleasure?

The Daily Dot reached out to Destructive Creations to talk about the game, but did not get a response by the time of publication.

Several other game developers, however, did provide their thoughts on the trailer and the sincerity of the game behind it.

“I feel like I have a pretty sensitive BS detector, but looking over the trailer and company website, I see no signs of satire or parody,” Alex Schwartz, co-founder of development studio Owlchemy Labs, told the Dot via email. “I only see high production values and serious time and effort in the materials they’ve put out, which is frankly disgusting and surprising that anyone would create a game like this. I can’t imagine many distribution outlets will agree to sell this…”

In a statement given to Gamespot, a representative from Destructive Creations acknowledged concerns over distribution. “We really wish to release [a] digital version through Steam and GoG, but actually we have no idea if they will let us to do this, because of all the sh**storm the game is delivering. :) We really would like to find a publisher for retail version also, but it might be hard for the same reason.”

Eitan Glinert, the founder of independent game developer and incubator Fire Hose Games, also felt that the trailer for Hatred represented a significant amount of work so as to represent a sincere advertisement. Glinert also had strong feelings on the matter.

“The developers behind this game should be ashamed of themselves. They’re creating something deliberately offensive that will create negative controversy in the industry, and the rest of us will have to spend time and energy repairing the damage this will cause. I’d complain more about them but I don’t want to give these assholes more attention,” Glinert said via email. “I hope that the media and news decides to bury everything about this game.”

The logo for Unreal Engine, one of the video game industry’s most widely-employed game creation tools, was included at the start of the Hatred trailer (though it has since been removed). We reached out to a representative from Epic Games, the creators of the Unreal engine, to ask how the company felt about its product being advertised in the trailer.

“Epic Games isn’t involved in this project. Unreal Engine 4 is available to the general public for use ‘for any lawful purpose,’ and we explicitly don’t exert any sort of creative control or censorship over projects. However, the video is using the trademarked Unreal Engine 4 logo without permission from Epic, and we’ve asked for the removal of our logo from all marketing associated with this product,” a representative from Epic Games told the Dot via email.