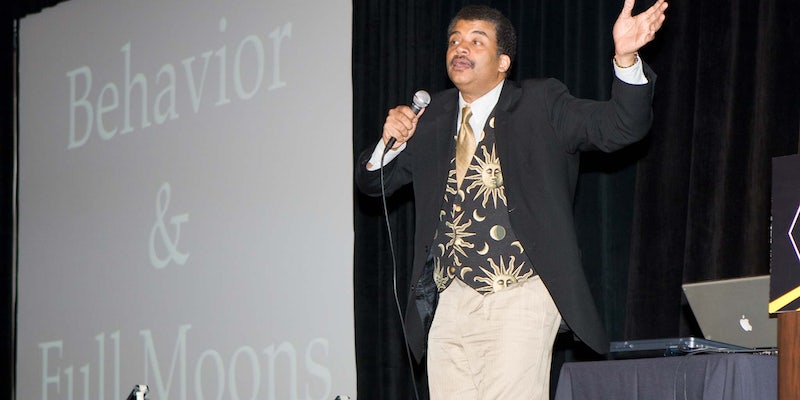 Everything you’ve wanted to know about Pluto but were too afraid to ask.

With the New Horizons probe at the precipice of the Pluto flyby, scientists and science enthusiasts are tweeting facts about the dwarf planet with the hashtag #PlutoFacts. Astronomer, science communicator, and hero of the Internet, Neil deGrasse Tyson, is leading the charge.

#PlutoFacts: More than half of Pluto’s volume is ice. I’m just saying.

#PlutoFacts: Earth’s Moon is five times more massive than Pluto. Get over it.

#PlutoFacts: Ever since Pluto was discovered in 1930, it has completed barely 1/3 of its own 248 year orbit around the Sun.

#PlutoFacts: In 1979, Pluto crossed Neptune’s orbit, and for 20 years was the eighth “planet” in the solar system.

#PlutoFacts: The moons Ganymede Titan Callisto Europa Io Titan & our Moon are all bigger than Pluto. Get over that one too.

#PlutoFacts: As reported in the @NYTimes in 1930, when discovered, Pluto was presumed to be the size of Earth.

#PlutoFacts You could jump 15 feet or more on Pluto, and you'd shatter like glass when you landed, because you'd be frozen solid.

#PlutoFacts Pluto probably formed much closer to the sun until Neptune was flung outward and pushed it 4Byrs ago. #PlutoFlyby

#PlutoFacts heat advisory today for Birmingham, highs around 98 all week. #Pluto only reachs -369 on its hot summer days! @spann

We are learning so much more about Pluto thanks to the New Horizons probe NASA launched in July 2009. You can follow along the action here.
Photo via Scott a hurst/Wikimedia (CC BY 3.0)