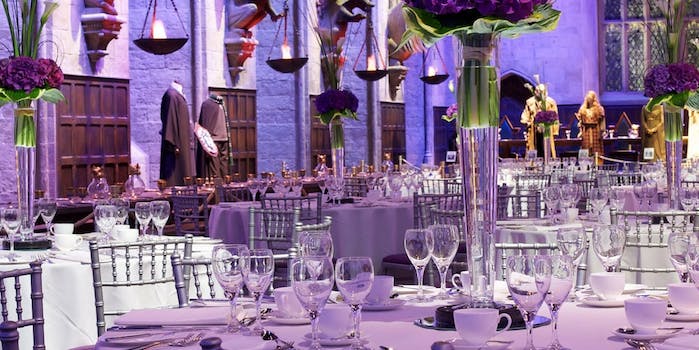 The bad news: It's super expensive and already sold out.

There’s no Christmas like a Hogwarts Christmas. Maybe it’s the magical snow falling from ceiling of the Great Hall, or all those cozy scenes where Harry and his friends open presents together in the Gryffindor common room. Whatever it is, it adds up to previously unseen levels of holiday cheer.

And now, thanks to the Harry Potter studio tour (just north of London), some lucky fans are going to have their own charming Hogwarts Christmas—for a price.

Warner Bros.’ Harry Potter studio tour has already hosted events in a version of the Great Hall set, but this year they’re setting up a full Christmas dinner. The description sounds like a dream come true for any Potter fan:

“The Hogwarts dining room will be dressed for the occasion with the original props used in Harry Potter and the Philosopher’s Stone, including flaming Christmas puddings and hams studded with cherries. A wand will be waiting for you at your table and you’ll enjoy the first two courses of a delicious Christmas dinner with all the trimmings.”

The evening continues with a studio tour, dessert, Butterbeer, and a party. It’s open to over-18s only, and costs an impressive £230 ($349).

Considering the number of die-hard Harry Potter fans in the world, it isn’t totally surprising that all the tickets for the December 3 event have already sold out. However, given the hefty ticket price, you’re probably better off saving for next year’s Hogwarts Christmas instead.

If you can’t wait that long, here are some other events happening at the studio.