What does it say that the Boy Who Lived has more aggressive acts under his belt than Voldemort?

Many fans of Harry Potter have spent years arguing that the “good” characters in the series aren’t as good as we might think—and now they have stats to back up their argument. Redditor MrLegilimens has done a statistical analysis on aggressive actions as performed by some of the best and worst characters in Harry Potter.

MrLegilimens’ analysis defined “aggressive” acts as “attempts (successful or not) to cause physical harm to another living being.” Inevitably, with the spotlight on Harry, he’s the most aggressive character of all.

“I felt Harry was always more reactive-aggressive, only attacking when he was attacked, and mainly made other people do his dirty work.”

Overall, the “good” characters of Harry Potter are shown engaging in nearly 20 percent more aggressive behavior over the course of the series than their villainous counterparts: 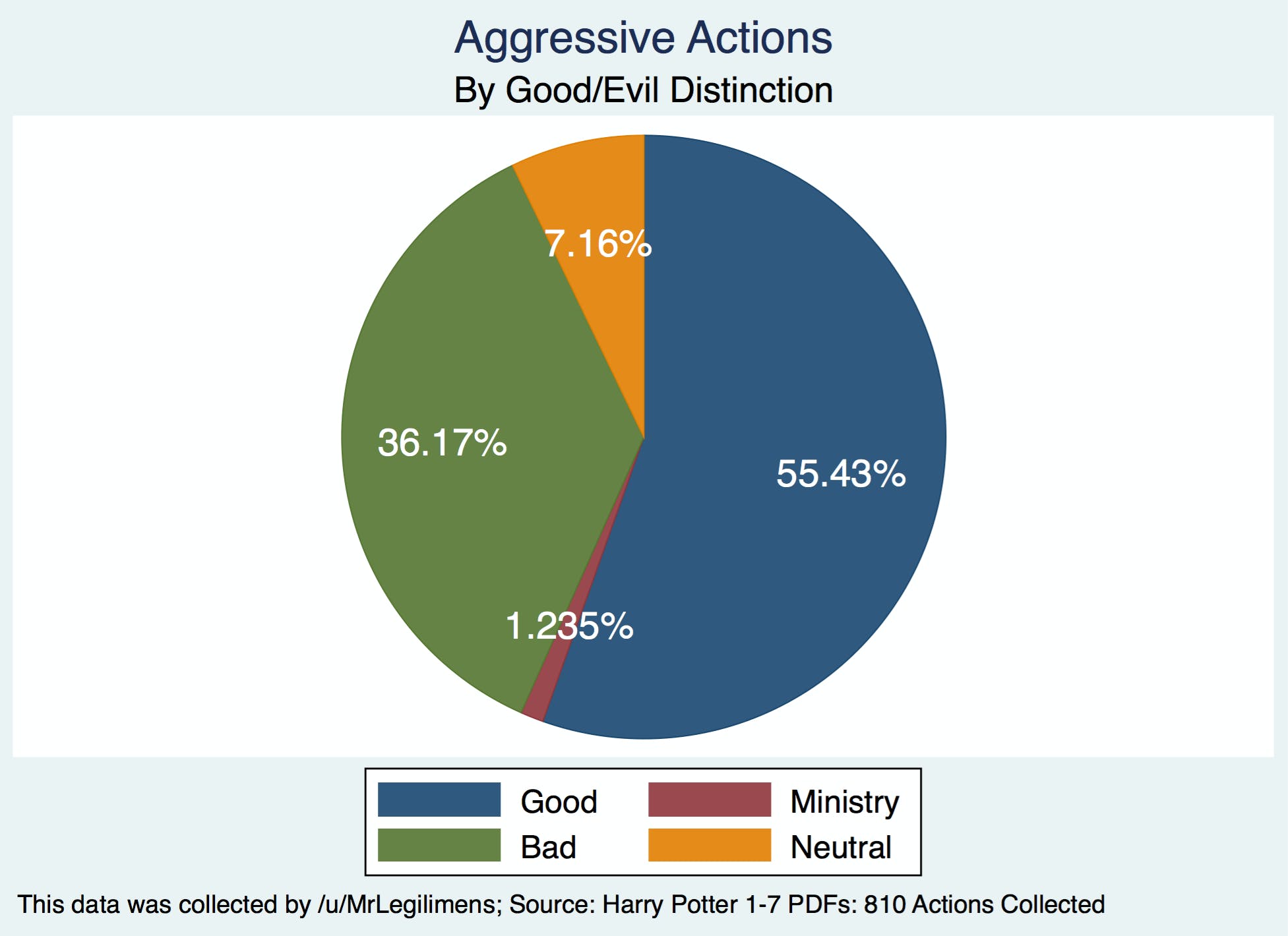 If that blows your mind, the book-by-book breakdown offers even more revelations—like the jawdropper that meek Neville Longbottom is barely less aggressive in Order of the Phoenix than Dolores Umbridge, who’s arguably the most evil character in the series: 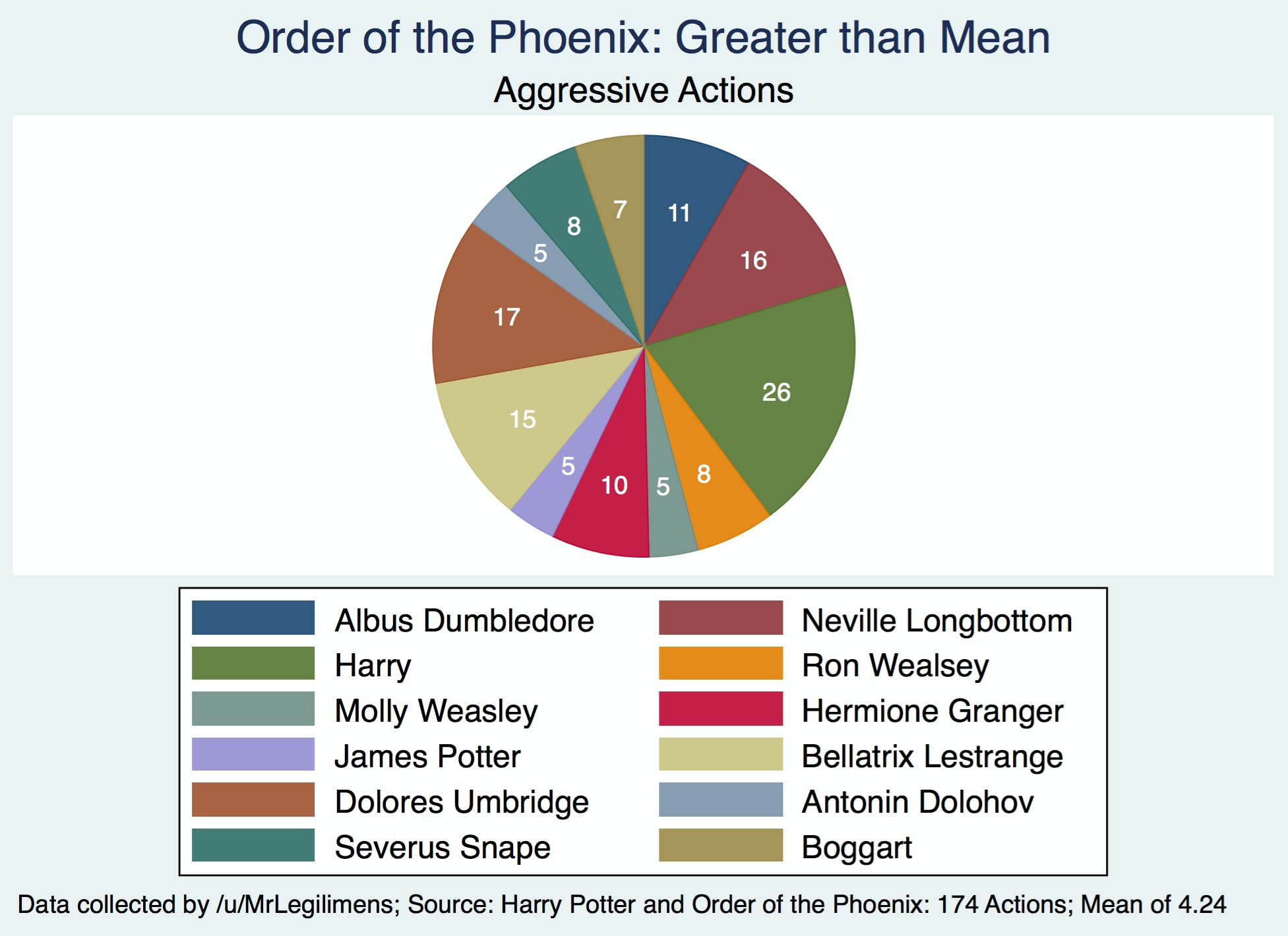 The chart above also shows you the pitfalls of a straightforward analysis like this. For starters, it doesn’t attempt to weight the aggressive acts. Casting the Killing Curse doesn’t count as “more” aggressive than casting a Stupefy spell on someone, for example. And it’s also impossible to take into account things the villains (or the good guys) are doing offstage.

But it’s also a very useful analysis in terms of demonstrating something every devout HP fan knows all too well: that there’s sometimes—how can we put this delicately—a huge discrepancy between what J.K. Rowling‘s text says and what it actually shows. Nowhere is this more glaring than in the complicated and murky lines that separate HP’s good guys from the bad guys.

“Obviously we hear the narrative through Harry’s eyes. But is that any different then what we hear about war through the media? We’re not listening to the struggles of the soldiers on the ground or the citizens whose houses we blow up in the name of democracy.”

But when we actually look at what the good guys do in the books, compared to what the bad guys do, there’s often not a lot of difference between them—and sometimes our heroes even come off looking worse. For example, while the Sorting Hat tells us that the four houses “must unite” or they’ll “crumble from within,” the other three houses spend seven books pretty much ostracizing Slytherin, to the point where not a single member of Slytherin is willing to stand and fight against Voldemort in the final book.

In the books, the “good” characters generally include Harry, Hermione, Ron, Dumbledore, and members of the Order of the Phoenix and Dumbledore’s Army. The bad guys include outright villains like Voldemort and a host of more nebulously shaded characters like Snape, the Malfoys, and multiple Ministers of Magic who all present as “bad” to some degree. (The analysis deems Snape an “evil” character based on his acting against Harry and Dumbledore’s Army—sorry, Snape fans!)

And while Hermione is perhaps the character in the series who’s most devoted to fighting against injustice, she also has absolutely no problem with trapping an adult woman in a jar for a full year (Rita Skeeter, in beetle form), or with deliberately turning Professor Umbridge over to a herd of centaurs.

This is pretty heavy stuff for any book series, let alone one intended for children and teens. But as MrLegilimens’ analysis shows, the trend of the heroes being shown to be more aggressive than the villains they’re fighting is one that stays consistent more or less throughout the books. Things particularly take off in book 3, Prisoner of Azkaban, when we’re introduced to a host of new characters.

Another fascinating aspect of the analysis is what it doesn’t include. For instance, Lucius Malfoy is clearly not a “good” character: He’s portrayed as being one of Voldemort’s most loyal supporters, and Voldemort uses Malfoy Manor as his headquarters for months at one point in the series. But when I was looking at the analysis I was shocked to realize that Lucius doesn’t appear anywhere on the list of characters who perform directly aggressive acts.

When I asked MrLegilimens if this was because Lucius is a master manipulator who’s capable of engineering things without being directly aggressive himself, he said yes. For example, in this passage from Chamber of Secrets, Lucius may or may not directly injure Arthur Weasley during their argument, but it’s never clear:

There was a thud of metal as Ginny’s cauldron went flying; Mr. Weasley had thrown himself at Mr. Malfoy, knocking him backward into a bookshelf. Dozens of heavy spellbooks came thundering down on all their heads; there was a yell of….

Mr. Weasley had a cut lip and Mr. Malfoy had been hit in the eye by an Encyclopedia of Toadstools. He was still holding Ginny’s old Transfiguration book…

“It’s questionable whether or not a cut lip came from the falling books, the jumping on Mr. Malfoy himself, or Mr. Malfoy punching him,” MrLegilimens pointed out.

Like many of us, MrLegilimens grew up with Harry Potter and says that the books had a huge impact on him as a kid. Now a grad student on the East Coast, he studies “social psychology and public policy within power and decision making.”

He told the Daily Dot that the idea for doing the analysis “started just off a conversation I was having:”

I said that I felt Harry was always more reactive-aggressive, only attacking when he was attacked, and mainly made other people do his dirty work. You see this when Hermione freezes Neville, when Hermione deals with Umbridge, and when Harry sets Kreacher onto Mundungus. But I wasn’t sure if I was correct, so I set out with an attempt to prove it!

Though his analysis has provided plenty of room for debate, he joked that he wasn’t sure what he’d proved, if anything. He also noted that despite the overall averages of good and bad characters, the main villains generally are more aggressive than everyone except Harry and Hermione. But while the aggressive actions we see are because the spotlight is on Harry as the narrator, he also noted that this is exactly the problem with real-life stories in which sides of a battle are portrayed as heroes and aggressors:

Obviously we hear the narrative through Harry’s eyes. But is that any different then what we hear about war through the media? We’re not listening to the struggles of the soldiers on the ground or the citizens whose houses we blow up in the name of democracy.

It’s probably not the most comforting thing in the world to view Harry Potter as a kind of American Sniper, with a similar us/them mentality. MrLegilimens acknowledges that despite the narrative’s emphasis on love, in the end, “He had to fight for what he wanted and he had to fight fire with fire.” But he also noted the chilling implications of seeing that play out over the course of the books:

When Harry raises his wand and fires, he’s aiming to injure. It’s sort of like aiming a gun – you shouldn’t do it unless you know the full consequences and are ready to kill.

You can see the full analysis at Imgur.

Photo via yaketyyakyak/Flickr (CC BY 2.0)