Awesome parents give their son the world’s coolest Hogwarts nursery

We might still be waiting for our Hogwarts or Ilvermorny letters, but for one baby, his Harry Potter-themed nursery room transports him straight to Hogwarts.

Casey and Kaycee Daniel started to plan the Harry Potter-themed nursery for their now 7-month-old son Finley months before he was born. Finley’s dad, Casey, is a massive Harry Potter fan, having read the books and listened to the audiobooks since he was a child. With help from designer Nate Baranowski, the room eventually came together.

“Our Harry Potter Nursery is finally complete after several months of planning!” Kaycee shared with members of a public Harry Potter Facebook group. “I absolutely love the way everything turned out! As I sit here rocking our little man to sleep it’s like I am in Hogwarts!” 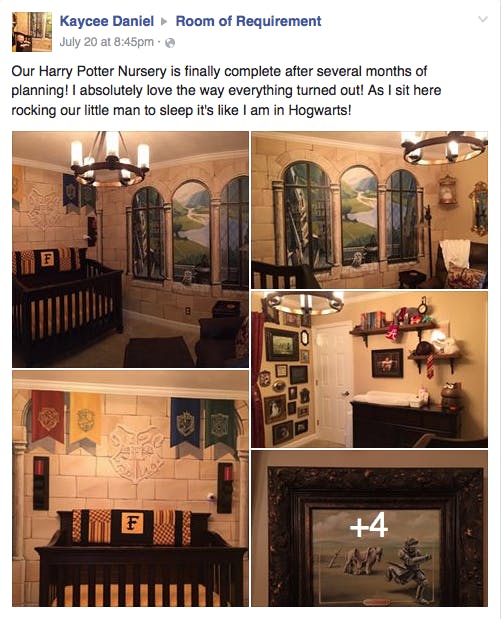 (You can get a closer look at the photos here.)

Finley’s nursery is full of magic, even though he’s too young to know it just yet. It features a painted window to capture the view outside of Harry’s room to the four Hogwarts house crests, a watchful Hedwig to keep him company, and photos of characters and settings from the book.

There just might be a few adult Potter fans who might be taking design notes, for their kids or themselves.