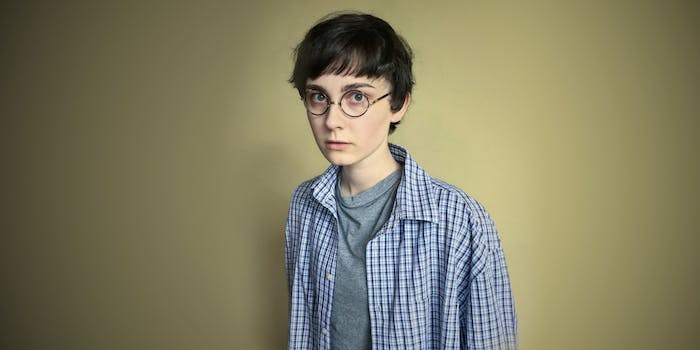 How an Instagrammer magically transformed herself into Harry Potter

An ingenious young lady on Instagram who dabbles in self-transformation has turned herself into the spitting image of one of the world’s most beloved wizards.

Annelies van Overbeek, an 18-year-old who is part Dutch and part Belgian, favors a gorgeously retro Audrey Hepburn-inspired look most of the time. But in honor of a recent rewatch of some of her favorite Harry Potter films, she decided to turn her chameleon skills on becoming the title character. The results were quite remarkable, especially for a young woman whose image is so traditionally feminine.

Van Overbeek said that she always wanted to be an actress, which is why taking pictures like these are a sort of catharsis for her.

“When I dress like these characters I feel like I become them in a way,” Van Overbeek said. “Taking my pictures really is acting, because in the end the facial expression makes the photo. I also love doing makeup, hair and assembling the costumes.”

Growing up watching the Harry Potter films had a major impact on Van Overbeek. She says she started watching them when she was 3 years old and has been madly in love ever since. She recently celebrated her birthday by attending a Harry Potter exhibit and watching all the films again in order, which gave her the idea to dress as Harry for the photoshoot.

Of course, her love of Harry Potter is only a sliver of her unusual story. Van Overbeek’s passion for vintage style shines through her photos, which she often enters into lookalike contests. (For the record, she does not use Photoshop and takes all her photos with an iPhone!) After she won honors in a contest earlier this year, she started posting photos of a wider range of outfits from eras as varied the flapper look of the 1920s to the Edwardian beauty of the early 1900s.

“I hope she’ll be a fool – that’s the best thing a girl can be in this world, a beautiful little fool.” 🌹 I’m still waiting for my Gatsby jewellery pieces, but I couldn’t wait to try out my wig. #thegreatgatsby #daisybuchanan #flapper #1920s #careymulligan #1920sfashion #friends_of_faces_and_style #annemariafrancine

Van Overbeek tells the Daily Dot that although she has a passion for many eras of style, the 1950s is by far her favorite.

“Everything was so elegant back then!” she said. “And it’s acceptable to wear 50s style clothes nowadays! Otherwise the Edwardian era would have been my favorite.”

Van Overbeek’s outfits, best of all, are authentically vintage down to the details.

Van Overbeek was cagey about what her next photo might be, but she did tell us that she’s busy gathering props for an eventual picture as Charlotte Flax, Winona Ryder’s character from Mermaids.

“Unfortunately I don’t have the budget to buy more good wigs, which makes things difficult,” she said. “Because I have plenty more ideas!”

Somehow we think that she’s clever enough to invent a workaround. And until she does, it’ll be great fun to see what she comes up with next.