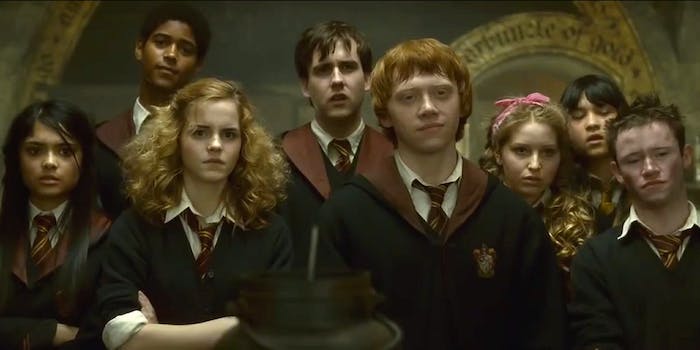 What happened to Lavender Brown?

A minor change on Pottermore's site is bringing the age-old debate back up again.

The overhaul of Pottermore’s website last week provided fans with even more information about Harry Potter and the Wizarding World to obsess over, but it also may have opened up a can of worms yet again in regards to one character’s fate.

Lavender Brown is a fellow Gryffindor in Harry’s year, and for a good portion of the series we don’t really hear much about her. She had a particular affinity for Divination, she got along with the other Gryffindors—particularly her best friend Parvati Patil—and she joins Dumbledore’s Army her fifth year. She dated Ron Weasley for a few months her sixth year, and she joined the student resistance movement against Hogwarts’s regime under Voldemort her seventh year—even fighting in the Battle of Hogwarts. At one point during the battle she was attacked by the werewolf Fenrir Greyback.

It’s that last bit that’s been up for debate by fans.

Hypable’s Andrew Sims discovered last week that Lavender’s character page declared her “presumed dead” on May 2, 1998. Dates of birth (and death where applicable) are part of every Harry Potter characters’ biography page, but there was something off about Lavender’s death: It was never explicitly confirmed in Deathly Hallows in the same way that Fred Weasley’s (whose death we saw), or Colin Creevey, Remus Lupin, and Nymphadora Tonks’s were (whose deaths we didn’t see).

At some point in the past week, the page has been changed so that Lavender’s presumed death has been removed. All that remains of her fact file is her Hogwarts House.

But with this minor change, does that mean that Lavender has been alive all along? It really depends on how you view the canon.

In the chaos of the Battle of Hogwarts in the book, Harry, Ron, and Hermione come across Fenrir about to sink his teeth into Lavender, who had just fallen from a balcony. Hermione and Professor Trelawney are able to stop this from happening with some help from magic and a crystal ball, respectively.

Here’s the passage from Chapter 32, “The Elder Wand.”

“NO!” shrieked Hermione, and with a deafening blast from her wand, Fenrir Greyback was thrown backward from the feebly stirring body of Lavender Brown… Then, with a bright white flash and a crack, a crystal ball fell on top of his head, and he crumpled to the ground and did not move.

Lavender is injured and barely conscious when we see her, but she doesn’t get mentioned again for the rest of the series—not even among the list of the dead. According to Harry’s knowledge after the battle, 54 people died in the Battle of Hogwarts—Fred Weasley, Lupin, Tonks, Colin, and 50 others who were unnamed.

Although it is possible that Lavender’s name was among the 50, she’s been part of Harry’s life for seven years. They were in the same House, they ate together, attended class together, they talked during her relationship with Ron, and she was a member of Dumbledore’s Army—both when it was an underground extracurricular and an underground resistance. She was a big enough part of Harry’s life to be named alongside Colin.

The movie adaptation of this scene seems to imply otherwise. Hermione blasts Greyback away from Lavender, but she doesn’t move when the camera focuses in on her face.

Shortly after, Parvati and Professor Trelawney are seen pulling a sheet over someone’s head in the Great Hall. It’s never said if it’s Lavender, but possible implications are there. And according to Harry Potter Page to Screen: The Complete Filmmaking Journey, Lavender eventually died from her injuries.

The matter is such a topic of debate on the Harry Potter Wiki—it officially takes the stance that Lavender’s death is “unambiguously canon” because there’s nothing in the books to contradict what Deathly Hallows Part 2 shows—that it asks new readers to look at the archives before they try and add anything lest they repeat what’s already been debated.

But not everyone agrees with this conclusion.

“The wiki says she died of her injuries, but that is only because the book has her feebly stirring and the movie shows her dead,” MaimedPhoenix wrote in a recent Reddit discussion of the debate. “Personally, I believe the movies is just that, movies. Adaptation does not equal canon and it never will. The books says she stirred, she moved, she was alive. If Rowling meant to kill her, she wouldn’t have even implied a sliver of hope that she might pull through and never follow up with it. Therefore, it is to be assumed that she lived.”

J.K. Rowling’s word is considered canon for fans just as much as the books, but she has yet to say anything specifically regarding Lavender’s fate. Does book canon triumph all, or do the films have as much validity in their own medium, similar to how George R.R. Martin says the books are the books and the show is the show in regards to A Song of Ice and Fire and Game of Thrones.

But until Rowling gives us her answer either way, there’s always fanfiction.