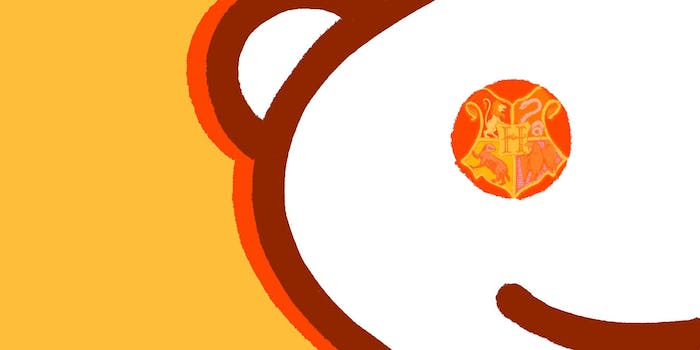 Are you taking notes, HBO?

We’re already getting more of the Harry Potter universe in the form of the Fantastic Beasts films and Harry Potter and the Cursed Child, but one fan’s show pitch about the Hogwarts founders offers yet another part of J.K. Rowling’s world we desperately want to see.

Redditor Njdevils11 posted an incredible pitch for an “HBO-style” Hogwarts series to r/harrypotter that’s full of secrecy and persecution of witches and wizards, political intrigue, alliances, and betrayals as Godric Gryffindor, Helga Hufflepuff, Rowena Ravenclaw, and Salazar Slytherin came together to found Hogwarts School of Witchcraft and Wizardry.

The Wizarding World was a very different place in the medieval period when Hogwarts was first founded. It was most likely an environment unlike anything we’ve seen from the Harry Potter universe before (and one we may only get a taste of in Fantastic Beasts). Let Njdevils11 set up the scene (which is definitely worth reading in its entirety):

We know Hogwarts was created approximately 1000 years ago, prior to the ministry and even the Wizengamot, in order to be a safe haven for wizards. We can assume that at this time witches and wizards were being hunted and killed. There was serious religious fervor at the time that sought to destroy any heretical teachings, like wizardry. While wizards are powerful, they are also few in number and mostly unorganized when compared to religiously zealous muggles. In this environment we see the four founders emerge as leaders and our series begins.

Njdevils11 goes on to set up the series—which would be at least three seasons—painting the founders as powerful and knowledgeable witches and wizards who aid others of their kind. It’s not until the persecution of witches and wizards reaches near disastrous proportions that the most powerful witches and wizards of the time (Gryffindor, Hufflepuff, Ravenclaw, and Slytherin among them) gather to create a solution.

And once Hogwarts opens, things don’t get any easier, as the four founders have to fight outside forces while dealing with tension within Hogwarts. The series, as Njdevils11 tells it, would follow the founders as they build the beautiful castle we know well by now, ending on a cryptic note regarding just why Salazar built the notorious Chamber of Secrets.

Although the show idea isn’t necessarily geared towards HBO (which aired the adaptation of Rowling’s adult novel The Casual Vacancy in the U.S.), this hypothetical pitch to a cable network or a streaming network like Netflix would allow for creative freedom without restrictions from advertisers.

As Njdevils notes, the Harry Potter fandom is teeming with endless stories about the Hogwarts founders. The idea of a film adaptation focusing on the founding Four has ended up on lists before, and is the subject of at least one fan-made trailer.

We know very little about the founders. Their stories are so far removed from the Harry Potter series and Fantastic Beasts that canon places very few restrictions around what we can imagine about their lives. But just think what else a Hogwarts founders TV show could tackle: the origins of the founders’ items that eventually became Horcruxes; the drama of what finally drove them apart; Helena Ravenclaw’s parentage; the lives of the children of the other founders; the evolution of magic from more than 1,000 years ago.

The possibilities are endless—so long as we eventually get more Harry Potter stories from all this speculation.

That’s no small task, but Muggles and No-Majes can dream.