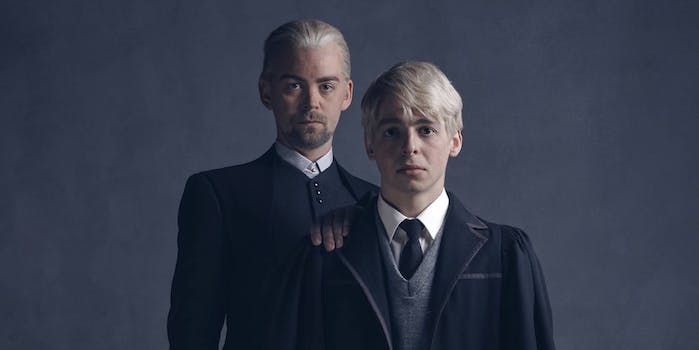 Here's our first look at the grown-up Draco Malfoy

Five days before the first preview performances of Harry Potter and the Cursed Child, it’s time to meet the new generation of the Malfoy family.

After seeing photos of Harry, Ron, Hermione, and their children, fans were curious to know what the new, middle-aged Draco Malfoy would look like. These images, featuring Alex Price as Draco and Anthony Boyle as his son Scorpius, are pretty simple, but they still include some clues about the characters’ roles in the play.

Unlike the casual Weasley and Potter family photos, the Malfoy pictures are more austere. Draco and Scorpius pose together like an old-fashioned family portrait, with Draco’s hand resting on Scorpius’s shoulder.

Interestingly, Scorpius’s expression is soft and rather nervous, hinting at a very different personality from his father—an obvious contrast with Rose Weasley, who looks like she inherited Hermione’s confidence and the Weasley Twins’ mischievous spirit.

Like the other young characters in The Cursed Child, Scorpius wears the robes of a Hogwarts student before the sorting ceremony takes place. So while some fans are speculating that Rose Weasley wears a Hufflepuff cardigan, we have no idea whether Scorpius will take after his family’s long-held Slytherin affiliation.

Along with the Malfoy family photos, the play’s creators also shared a behind-the-scenes video of the main cast during their photoshoots. We’re loving Draco’s complicated ponytail braid!

See behind the scenes of our #HarryPotterPlay character photo shoot in this exclusive video. #CursedChildhttps://t.co/t4ek7kKKdW