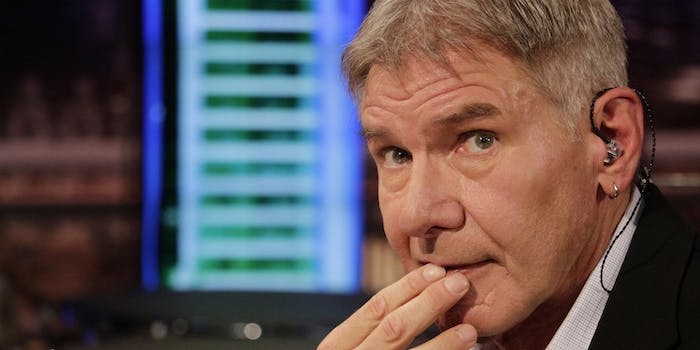 Among Star Wars aficionados, there is one age-old question that separates the wheat from the chaff: Who shot first, Han or Greedo?

If you say Han, you’re a true fan of Han Solo’s original characterization as a morally ambiguous rogue. If you say Greedo, then you’re clearly a George Lucas stooge with no respect for canon. (If you say “Who the hell is Greedo?” then just FYI, it’s this green alien dude from the first Star Wars movie.)

Now, thanks to Harrison Ford’s Reddit AMA on Sunday afternoon, we can now know the definitive answer to Who Shot First.

“I don’t know and I don’t care,” apparently.

If you think about, this is pretty much the most Han Solo-ish answer he could possibly have given.

On a similarly fitting note, the iconic Indiana Jones “duel” between Indiana and an angry swordsman wasn’t originally written into the script. It was meant to be a lengthy fight sequence, but Harrison Ford had dysentery at the time, and suggested that he should just shoot the guy instead of spending several days filming the scene.

Aside from that, the AMA did give us a bit more of a glimpse into the world of Harrison Ford. For example, while the Internet does love to praise him for occasionally saving people’s lives as a helicopter rescue pilot, he’s not going to be bragging about this anytime soon. “You know, anything that I was involved in with picking people up in a helicopter, I was one of a group of people working with Wyoming on search and rescue,” he wrote. “They were always team efforts, and it was always embarrassing to be singled out and given credit for a rescue or any help I was able to give because it was always a team effort.”

Unsurprisingly, most of the AMA focused on Ford’s three most iconic roles: Rick Deckard, Indiana Jones, and Han Solo. He was surprisingly patient with questions he’s probably heard a million times before, and agreed to settle a debate that has been discussed for decades: Who would win in a fight between Han Solo and Indiana Jones?

Cynical as ever, Ford replied, “The promoter would win.”

Photo via elhormiguerotv/Flickr (CC BY 2.0)