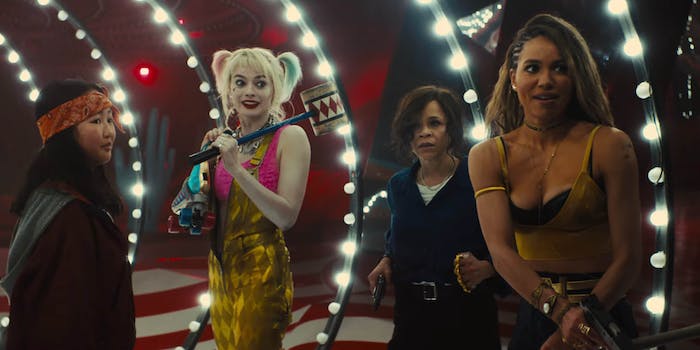 So does Harley murder the Joker in the latest ‘Birds of Prey’ trailer?

The latest footage is turning some heads.

The latest Birds of Prey trailer is here, and amid the chaos and camaraderie, everyone’s got blood on their hands—including one fantabulous Harley Quinn, who might have just murdered the Joker?

“This all started when the Joker and I broke up,” Harley says early on in the trailer as we see her jump out of a moving car. “It was completely mutual,” she adds as she watches the car explode with flames and colorful fireworks at Ace Chemicals—Gotham City’s chemical plant—from a distance.

At least, that’s what looks like. Margot Robbie already confirmed that Jared Leto’s Joker (who was introduced in the largely panned Suicide Squad) won’t be in Birds of Prey, and killing him off from the get-go makes the logistics of telling a Harley story without the Joker physically being in it much easier. For anyone who hated Leto’s Joker and loved Robbie’s Harley, it’s sure to be a welcome change. (We just hope it isn’t some kind of convoluted fake-out that reveals a nearly unrecognizable Joker in the third act.)

That doesn’t mean that “Mr. J,” as Harley calls him, isn’t a massive presence throughout Birds of Prey. She might’ve murdered him, but she still mourns the loss of their relationship, complete with cheese whiz. And now that he’s out of the picture, a lot more people want her dead, including Ewan McGregor’s Black Mask and Chris Messina’s Victor Zsasz.

But she won’t be alone. By teaming up with Huntress (Mary Elizabeth Winstead), Black Canary (Jurnee Smollett-Bell), Renee Montoya (Rosie Perez), and Cassandra Cain (Ella Jay Basco)—who are all wanted dead for one reason or another—and a hyena Harley has named Bruce (after Wayne, of course), they might just have a chance.