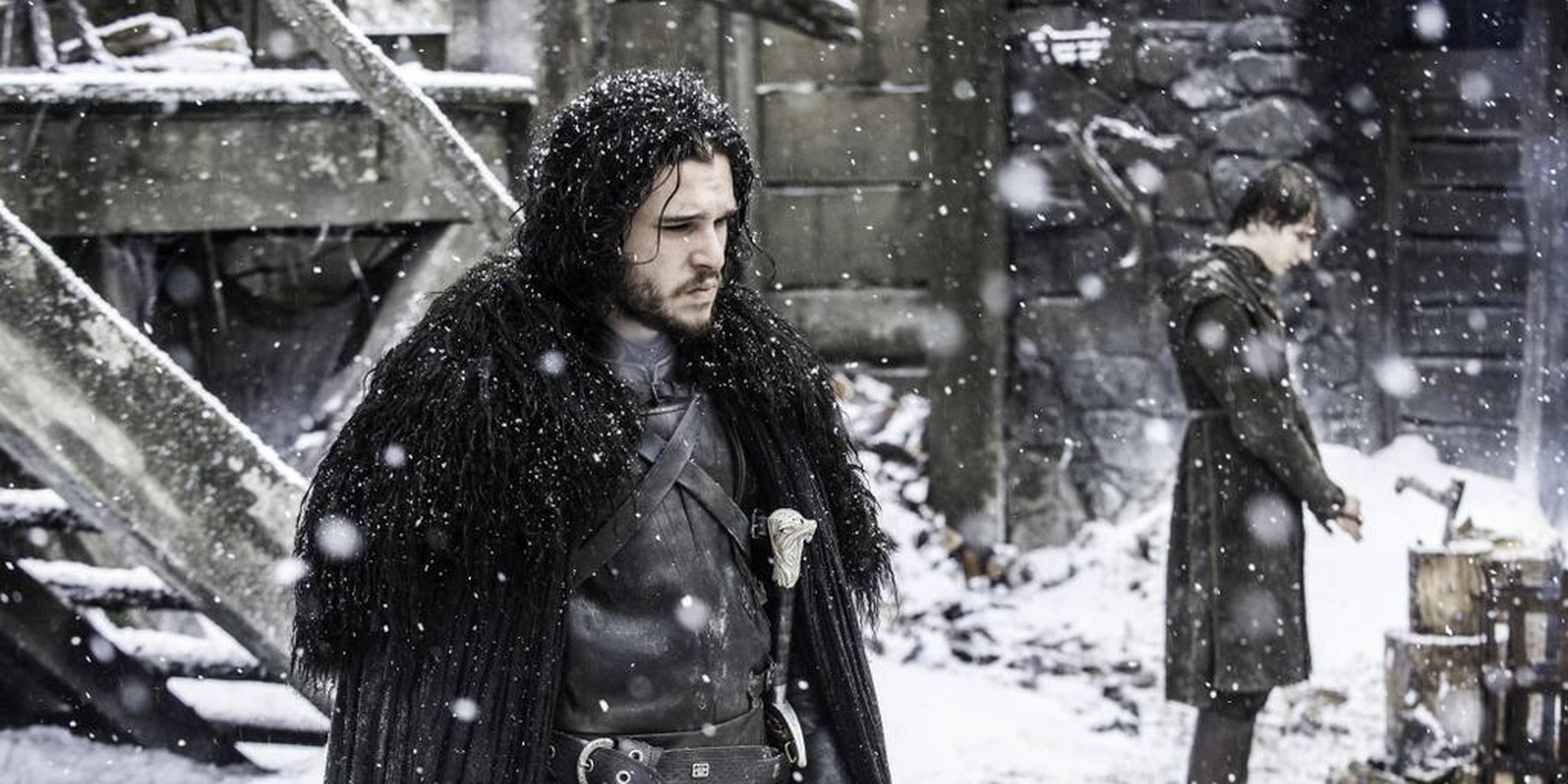 A guide to Hardhome, the most mysterious town in Westeros

We're going to the wildling town later in the season, but even book fans know very little about it.

This article contains spoilers for Game of Thrones and A Dance With Dragons.

The fifth episode of Game of Thrones‘s season 5 set the 998th Lord Commander of the Night’s Watch on a new path, one that will likely take him away for the rest of the season.

After squeaking into his big promotion, turning down being legitimized as a Stark by Stannis Baratheon, and dealing with the disobedient Janos Slynt, Jon Snow held a meeting with Tormund Giantsbane, one of Mance Rayder’s right-hand men, with a proposition: He’ll give the wildlings passage south of the Wall and land to settle on if they’ll help the Night’s Watch fight the undead army that’s encroaching from the north. Unlike the deal Mance refused to take from Stannis, there’s no kneeling required.

But then Tormund throws his compromise back at Jon, and Jon ultimately accepts. Most of the free folk (what the wildlings call themselves) are located in a place north of the Wall called Hardhome. Tormund will bring them back with him—but only if Jon joins him.

If you’re only watching the show, the namedrop of Hardhome might mean nothing, but for book readers and people who watched Game of Thrones: A Day in the Life back in February, it doesn’t come as much of a surprise. The production crew confirmed we’d be seeing Hardhome this season and said that filming would take three weeks and include a battle sequence.

Only, much like Jon himself, we don’t really know very much about Hardhome—and reading the books only gives you a slight edge. Hardhome is nearly as mysterious and possibly cursed place as ancient Valyria.

What is Hardhome, exactly?

The wildlings don’t often stay in one place for long, which is why settlements like Craster’s Keep are rare. Hardhome, as the only wildling town north of the Wall, was unique. Located at the tip of a peninsula, its harbor was ideal for trading and fishing.

Yeah. It’s been pretty uninhabited for centuries, at least until many of the wildlings recently took refuge there. “Hardhome is an unholy place, it’s said,” First Builder Othell Yarwyck tells Jon. “Cursed.” Jon knows the name, as does his sister Arya Stark—the latter who noted she heard it from Old Nan.

The thing is, nobody really knows. One night, approximately 600 years before the events of A Dance With Dragons take place, “hell had swallowed it.” The town was engulfed in flames so high that the Night’s Watch could see the fire all the way at the Wall. And for six months after that, ashes fell down. In our world, it’s compared to the Tunguska event—a massive impact by a comet or asteroid that devastated hundreds of square miles in remote Russia in 1908.

But when traders and the Night’s Watch came to investigate what happened at Hardhome, everyone had vanished. The town was in ruins, corpses were still in the water, burned bones and trees were everywhere, and those who came to Hardhome could hear echoed screaming from the caves.

What happened to the wildlings who lived there? It depends what story you believe in. Some say that the wildlings were killed for meat while others believe that they were enslaved. The latter has some weight to it; Arya learns that two Lysene ships found wildlings at Hardhome and brought them on board, fully planning to sell them as slaves before one of them was seized in Braavos (where the slave trade is forbidden).

A tinfoil theory actually suggests that the Faceless Men of Braavos were behind the attack on Hardhome as practice for their true target: the Valyrians who enslaved them in the first place. Although the events in Valyria and Hardhome take place around 200 years apart, there are a striking number of similarities. And if nothing else, the Faceless Men are very patient.

Why would the wildlings go to Hardhome if it’s cursed?

The show has yet to touch on why the wildlings are at Hardhome, but in ADWD they’re led there after Mance Rayder is defeated by Stannis Baratheon’s army by a mysterious wildling witch with the gift of prophecy called Mother Mole. She had a vision of ships and told them that they’d “find salvation where once they found damnation.”

In one sense, it’s already come true; ships did come for the wildlings but probably not the ones they were hoping for.

What is Jon trying to do? And why?

Jon’s ADWD plot, once he’s settled into the Lord Commander position, is to get the wildlings who are stuck at Hardhome south of the Wall before it’s too late. From what we’ve seen of Jon so far, it’s within his character to protect all of the men, women, and children of the realm (even the wildlings), but his motives are also more practical.

The wildlings are dying, and they won’t long survive the winter or the wights and White Walkers who inhabit those lands. When they die, they’ll become wights too. Thousands will join the army of the dead—and the Night’s Watch will have even more to fight once they reach the Wall. Saving them will save lives, but it’ll also reduce the White Walkers’ strength.

So what’s the gameplan—and how does it differ from the book?

Jon and Tormund will be traveling to Hardhome on Stannis’s ships, stepping in for Cotter Pyke, who leads the fleet in ADWD; Tormund isn’t at Castle Black at this point, but he and Jon eventually plan to lead a land mission to Hardhome before Jon hands the reins over to him. On the show, Tormund argues that the wildlings need to hear directly from Jon that they will be guaranteed safe passage. Sending Jon on the mission on the TV show gives us a familiar face, one to root for besides Tormund Giantsbane.

But as we’ve seen from the trailers, things don’t exactly go well.

The production crew gave us plenty of reason to be worried. Along with the fight sequences we’ve seen in trailers, Miguel Sapochnik, who directs episodes 7 and 8 of season 5, talked about a battle sequence, and the crew said that “one of the most complex and ambitious scenes of the season is filmed over three weeks” in Hardhome. (Episode 8 is actually called “Hardhome.”)

And as Vanity Fair’s Joanna Robinson discovered in a behind-the-scenes video, it looks like the wildlings and the Night’s Watch will be facing off against some powerful White Walkers (which may or may not include the Night’s King).

But we don’t actually see Hardhome in the books.

This is true, which makes everything about this so interesting—and crucial—for the future of Game of Thrones.

Although I speculated about the importance of the greyscale plot this season, the trek to Hardhome (and the ensuing battle) might turn out to be the first thing that “spoils” fans about future books in A Song of Ice and Fire.

Random #GameofThrones thought: It seems that the happenings at Hardhome will be the first big book spoiler to air on the show.

We only ever hear bits and pieces about Hardhome because the main viewpoint character in the books, Jon, never goes to Hardhome. It’s mysterious and spooky, and just like Valyria, we’re going to catch a glimpse in the show before the books.

But also, with the Hardhome plot advanced significantly, we’ll also be getting even closer to Jon’s ultimate fate. In the books he’s stabbed by his fellow brothers after he steps down from leading the Hardhome mission and tries to rally the wildlings and his brothers to attack Winterfell, but will a similar betrayal happen in Hardhome? Or will he fall to a wound from a wight or White Walker?

It’s hard to say at this point, but we do know one thing: Winter isn’t coming. Up north, it’s already here.