This wild console is undeniably versatile. But are the games any good?

You can see how these options can lend themselves to different types of games (hello third-party developers) and play styles. But at a $299 price point, gamers are a lot more interested in concrete deliverables—the games available at launch and shortly thereafter—than abstract possibilities.

I recently had an opportunity to give the Switch a 90-minute test drive at PAX South in San Antonio. Here is what I learned. 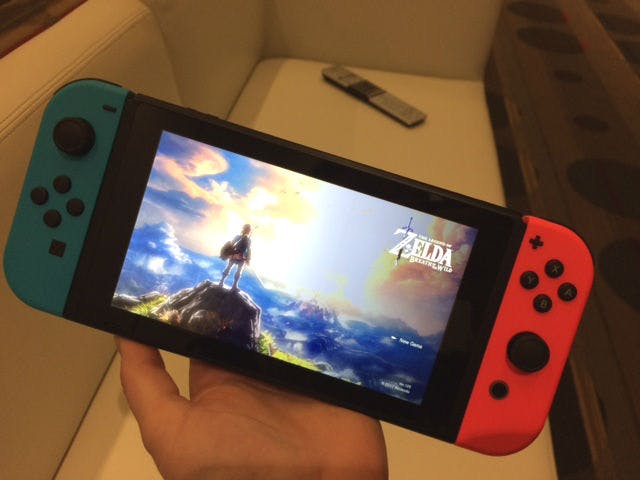 The Nintendo Switch comes with the touchscreen Switch console, the console dock, left and right Joy-Con controllers (in red and blue or gray), two Joy-Con wrist straps, the Joy-Con connector grip, a high-speed HDMI cable, and the Switch’s AC adaptor.

The console has a variety of configurations, but the one that will be most familiar to Wii U owners is the one set up like a gamepad. With the Joy-Con controllers clicked into the 6.2-inch touchscreen, you can take your game on the go, only this time there won’t be an annoying “disconnected” warning when you walk too far away from the game dock.

With the Joy-Con controllers attached, the unit is a little longer and thinner than the Wii U game pad. It has a USB Type C connector, micro SD Card slot, game card slot, and built-in speakers. There’s a kickstand on the back so you can prop up the touchscreen on a table in front of you. 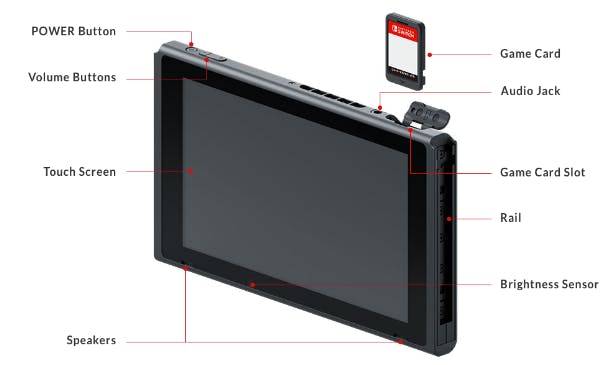 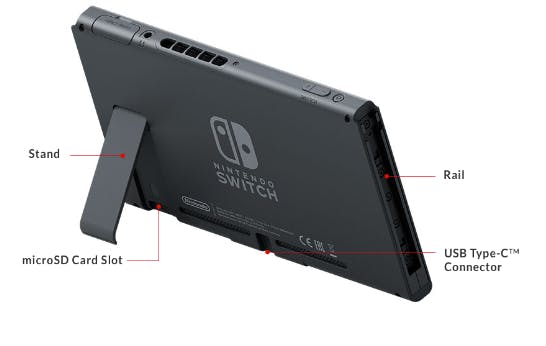 The Joy-Con controllers can also be plugged into an adapter to create a more traditional controller. 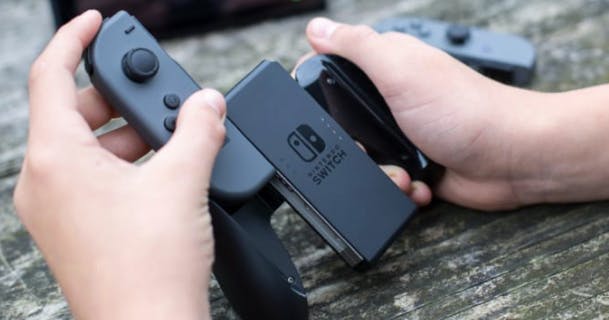 This will likely be the most comfortable way to play when you’re home on your sofa using the Switch with your TV. Players who prefer a more professional-style controller can purchase one separately for $69.99.

Nintendo’s advertising for the portable console shows people venturing out to parks and parties to play Switch with their friends, but if you want to get an extra set of Joy-Con controllers, it’ll cost you $79.99. The good news is that syncing your friends’ controllers is pretty easy—just slide the Joy-Con controllers into the Switch touchscreen. If you have buddies who can supply extra controllers when you need them, you can probably get away with forgoing the extra expense.

Inside, the Switch has a battery that can last three to six hours depending on what you’re doing. (Nintendo says you can expect three hours of battery life when playing Legend of Zelda: Breath of the Wild.) There’s a disappointingly small 32GB of built-in memory, but Nintendo hopes the microSD card slot will give users plenty of room to expand. It supports up to 2 TB of space (though that huge of a card doesn’t exist yet), and it seems with some of games you’ll need the extra space. Breath of the Wild alone eats up almost half the space (13.4 GB) if it’s purchased and downloaded digitally.

You can see a full list of confirmed launch titles for Switch here. Fair warning: It’s not very robust.

Nintendo’s launch games for the console are 1-2 Switch and the highly anticipated Legend of Zelda: Breath of the Wild, with a handful of additional games from third-party developers.

While some have complained that Switch’s early days seem thin, the list will look more attractive by the time the holiday season rolls around.

The first game my Nintendo Switch sherpa J.C. Rodrigo had me try was 1-2 Switch, a package of minigames seemingly designed to show off the capabilities of the Joy-Con controllers.

The finely tuned accelerometer and gyro-sensors inside the controllers make games like Quick Draw, Samurai Training, and Copy Dance possible. Quick Draw simulates a Western gun duel, where you stare at your opponent’s face and wait for the signal to draw. The person who raises his or her Joy-Con controller into firing position fastest wins.

Samurai Training similarly relies on quick reflexes. One opponent swings his Joy-Con controller vertically in a slashing motion, while the other raises her arms overhead and slaps her hands together (while holding the second Joy-Con) in an attempt to stop the blade. Rodrigo assured me that the Joy-Con controllers could take the beating. Copy Dance simply has you dancing on beat until you freeze frame in a dance pose with a Joy-Con controller in hand. Your opponent then has to copy your move.

Ball Count is also exactly what it sounds like. You place the Joy-Con on your palm and tilt your hand around to feel metal balls “rolling around” inside the controller. Really, it’s just the sensitive rumble capabilities, but it feels like the real deal. Your job in the game is to guess how many balls are rolling around, but the point seems to be showing off this nifty capability.

Rodrigo wouldn’t say how many minigames come with 1-2 Switch, but the last one we tried was the silliest. Rodrigo pulled out a tiny stool and special hat for me so we could pretend to milk cows. Yes, really. 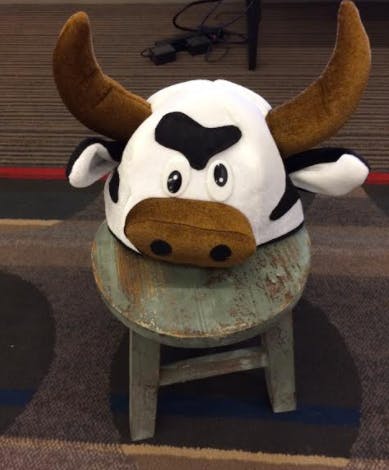 To play Milk, you grasp one Joy-Con controller upright in your hand and press your fingers top to bottom down the edge of the controller, while simultaneously moving your hand downward. Do this milking motion correctly and you fill up a series of milk bottles; fill the most bottles and you win. There is some technique to it—something Rodrigo has clearly mastered—but I can’t image loading up this game for casual Friday night play.

These are games best paired with a party, or perhaps as a way to entertain kids. To me their biggest selling point is as a kind of proof of concept for what the Joy-Con controllers can do, but 1-2 Switch‘s $49.99 price tag seems steep for an unspecified number of minigames with limited play potential. 1-2 Switch is a launch title available on March 3.

Arms isn’t a launch title for Switch, but it’ll show up sometime this spring. It’s essentially a boxing game, but it gets way more complicated than simply taking swings at your opponent.

Players can choose from a variety of characters, each with a unique set of abilities and souped-up boxing gloves.

For my Arms demo, I used two Joy-Con controllers held upright in my fists with my thumbs on top of the bumpers. I expected the game to mimic punches I was throwing with the Joy-Con controllers, but the gameplay was more contained. Tilting your hands slightly to the right or left allows your character to dodge, while a quick flick forward throws a punch. Flick both controllers forward to grab your opponent and inflict some damage. You can learn the techniques and your character’s unique abilities in a few minutes, but clearly they take some time to master.

That suggests Arms will have good replay potential. It’s a fast-moving game I can see being fun for parties or for individual play. Arms doesn’t have an exact release date yet, but it’s available for preorder for $59.99.

The Legend of Zelda: Breath of the Wild demo

We’ve been waiting impatiently for years for the next installment of the Legend of Zelda franchise, so my first 20 minutes with the game was both exhilarating and unsatisfying.

I’ll skip a description of the opening cutscene so you can experience it for yourself, but suffice to say Link’s world has changed in a lot of ways. It has a futuristic flare: Link immediately obtains a tablet device, and Hyrule is filled with over-grown ruins. Link has long had the limited option to change his clothes for different tasks and environments, but this time around his clothes and weapons can take damage, and will need to be maintained and replaced.

Walking into the new world as a longtime Zelda fan, I instinctively chopped at some grass—a maneuver that has resulted in the collection of rupees (currency) and hearts (health) in previous installments. But Rodrigo let me know that this time around I wouldn’t find any hidden rupees in the foliage. Likewise, Link now gets his energy from food, like some mushrooms I found along a path, instead of hearts. Cooking the food improves how much health you can regain from it.

It’s a drastic tweak sure to stir fan loyalties, but I really liked Link’s new Spider-Man-like ability to scale trees and walls. A stamina meter adds some limitations, but Link’s climbing ability introduces a lot of possibilities for discovering hidden passages and treasure.

That spirit of exploration is something Nintendo wanted to infuse into this open-world adventure. Previous installments of the game have given players moments of downtime from the main narrative for exploration, collecting items, and minigames. Breath of the Wild also has an essential main narrative, but players are encouraged to wander the open world at their own pace. In my short demo, I could tell just how barely I had scratched the surface of what’s out there.

Breath of the Wild will be a $59.99 launch-day release for Switch on March 3. It’s available on the same day for Wii U.