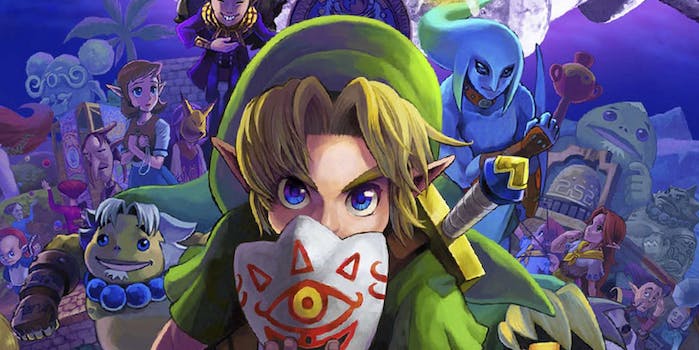 We tried out Nintendo's new slate of games.

Nintendo has gotten into the habit of kicking off the new year with a media event in San Francisco. It’s not meant to be a convention-level showcase, but more of a preview of what’s to come in the next few months.

Along with six new games (including a couple third-party games), Nintendo also showcased some recently released titles to demonstrate how those games benefitted from the improved camera functionality of the New Nintendo 3DS XL, due out Feb. 13. As much as I would’ve liked to get hands-on with Mario Maker and Mario Party 10 (both were absent), getting considerable tactile time with Xenoblade Chronicles 3D and The Legend of Zelda: Majora’s Mask 3D made attending the gathering worthwhile. Below are all the soon-to-be-released games present at the event, in order of personal hype level. 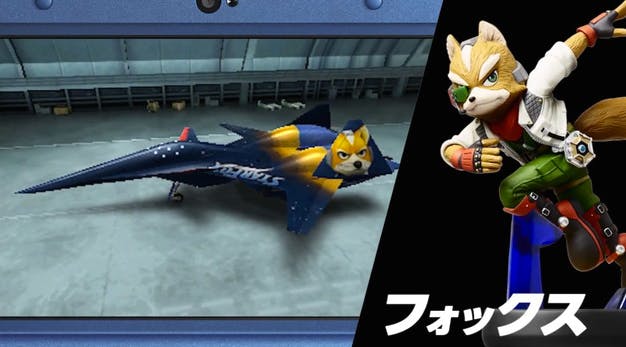 Ever since Ace Combat 04: Shattered Skies, I’ve had a soft spot for Namco’s long-running dog fighting franchise. Even its realistically shaky replay camera added to its appeal. As the title might implies, Ace Combat: Assault Horizon Legacy Plus isn’t a sequel, but rather a New 3DS-enhanced port of what was already a 3DS game. When it comes to controlling a plane, the improved 3D eye-tracking and C-stick of the new handheld just might give enough incentive to revisit Assault Horizon Legacy, even if you completed the game the first time around.

Its new amiibo compatibility isn’t so significant that we’d see Nintendo characters in cockpits or tweaks to the storyline. Nintendo and Bandai Namco are more practical than that. You’ll instead receive amiibo-themed plane skins like a paint job modeled after Princess Peach. The rub is that while you can unlock many of these skins through playing the game well and often, a couple of these upgrades are only available by having a particular amiibo. 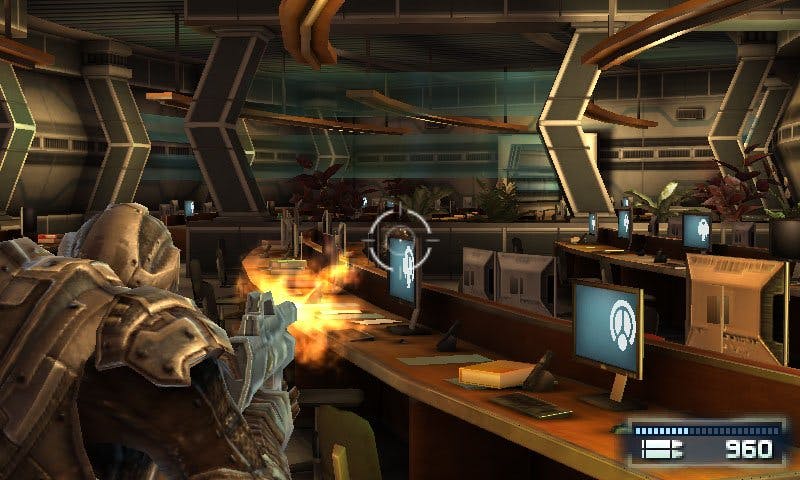 From playing IronFall: Invasion, I am reminded of the surprisingly limited shooter offerings on handhelds, let alone shooters with cover-mechanics. The Gears of War influence is strong, though I wouldn’t expect immensely high production values and brutality that only a lancer can deal. Still, IronFall shows promise, especially from a studio comprising only three developers.

One notable twist IronFall brings is a unique health point system. It isn’t a traditional health bar with finite points or gradual replenishment if you can avoid fire. Instead, you have to manage your stress and physical exertions. Whether you’re sprinting or taking fire, actions elevate your heart rate. You die if you reach 200 beats per minute. Assuming IronFall will have a lot of areas where you can catch your breath, I’m intrigued on how this game will further involve this heart rate health system, aside from making you that much more aware of the cover points around you.

It was only a couple years ago that we were experiencing a collective burnout from steampunk. Maybe it was because much of the content focused on the dark and dreary side to the genre’s aesthetic. The simplistic idea of adding weathered brass to everything didn’t help either. What makes me excited about Code Name: S.T.E.A.M. is its brighter, cartoony visuals. Oh yeah, it’s also a turn-based strategy game that pits Abraham Lincoln against aliens.

No surprise, Code Name: S.T.E.A.M. has its own amiibo compatibility. Fantasy isn’t many genre degrees away from steampunk, but I can play along with Fire Emblem amiibos, who are joining the fight against these extra-terrestrials. If any squad knows a few things about tactical combat, it’s the seasoned soldiers from Fire Emblem. This also bodes well for the possibility of more Marth figures, which are currently going well above retail price on the reseller market. Along with that blue-haired series mainstay, other Fire Emblem vets joining the amiibo roster soon include Robin, Lucina, and Ike, all of whom will be compatible with Code Name: S.T.E.A.M.. 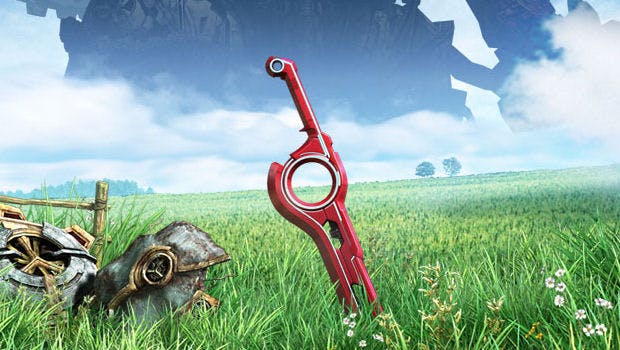 As I started to play Xenoblade Chronicles 3D, I was thrown off guard by a spokesman who was giving me a rundown of this highly anticipated port of the Wii version. He neither sugarcoated nor upsold the game with false promises of improved textures or other tweaks you associate with remasterings; it is a port, plain and simple. Of course, he had every reason to boast about the game’s improved functionality New 3DS, particularly the 3D visuals and the C-stick camera controls. The latter comes especially handy because this is an involving JRPG that mixes real-time and turn-by-turn gameplay. We can only hope that this portable version of Xenoblade Chronicles will help reduce the price of that Wii version, which still commands an above-retail value on Ebay. Lastly, this makes for a fitting JRPG to pass the time as we eagerly await its spiritual successor on the Wii U, Xenoblade Chronicles X. 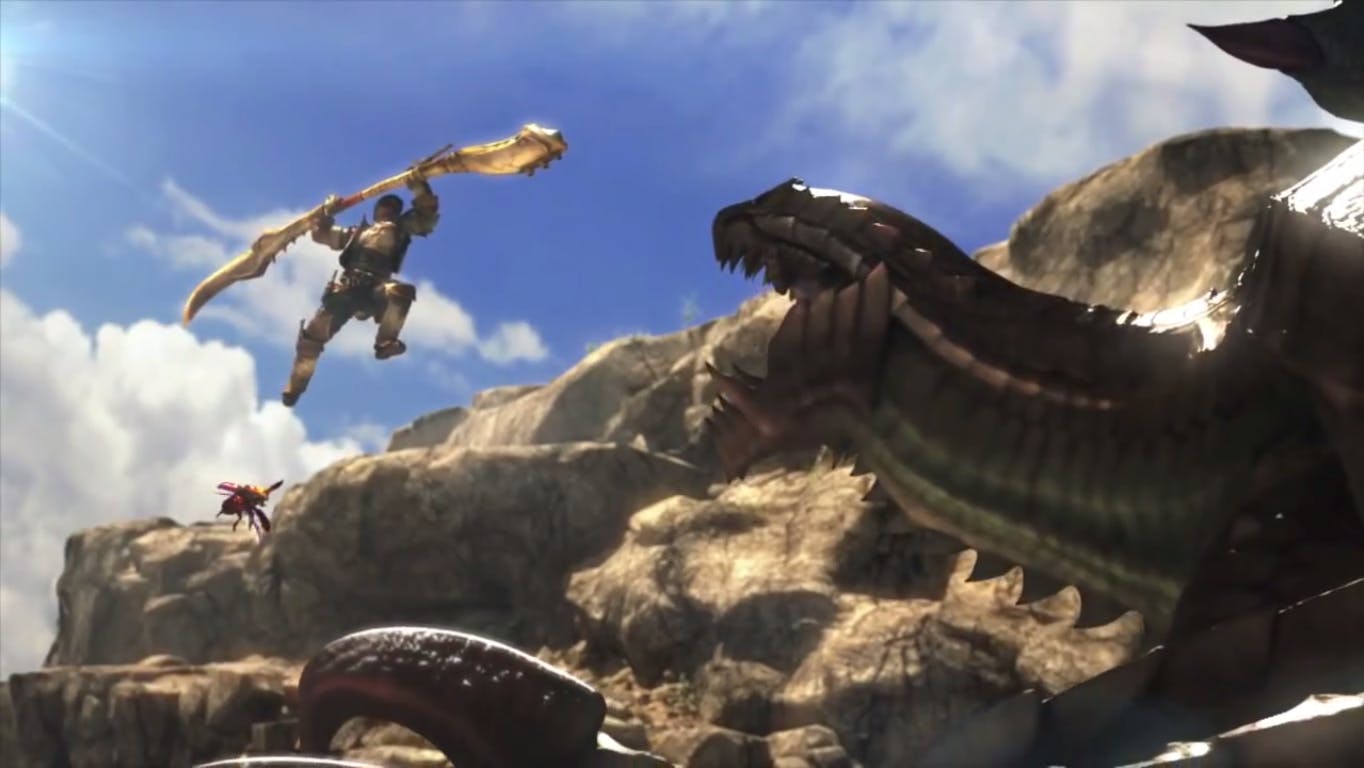 Monster Hunter’s grab on Western audiences might have gone slower than expected, but it is nonetheless growing. It only took a half hour of hands-on time to convince me that Monster Hunter 4 Ultimate is the most accessible installment yet. There’s an impressive conciseness to the tutorials and its opening hours aren’t short on spectacle. Basing the narrative around a nomadic caravan is fitting, especially for a game involving the pursuit creatures that have no business in settlements and urban areas.

It also takes a page from Capcom’s Dragon Dogma by allowing players to cling on to monsters and wail on them, a first for the series. This is complemented by added climbing controls and the option of executing jump attacks from walls. Franchise veterans will notice subtle changes to traversing maps, such as more opportunities for vertical movement. And for as long as Monster Hunter has been around, it wasn’t until now that multiplayer on a handheld will go beyond local play. Playing Monster Hunter with friends over the Internet will be a big deal.

1) The Legend of Zelda: Majora’s Mask

After the unsurprising success of The Legend of Zelda: Ocarina of Time 3D a couple years ago, a Majora’s Mask follow-up was inevitable, arriving shortly on Feb. 13. Its release is also aptly timed with the launch of the New 3DS XL, with its new right side C-stick as a major selling point. That means easier movement with the camera, since many of us are used to camera control on the right side of our console controllers. No, you won’t need the new handheld to play Majora’s Mask. Viewing functionality on the older 3DSes will presumably work just as it worked for Ocarina of Time 3D.

The more I got reacquainted with The Legend of Zelda: Majora’s Mask, the more I’m reminded that last year’s Lightning Returns: Final Fantasy XIII wasn’t all that original. Both games feature a doomsday time countdown and you spend a considerable amount of time closely interacting with NPCs, more so than your average adventure game.

Aside from remastered graphics, other changes to this 3DS version include fishing holes and more flexibility in shifting time. What I’m especially excited about are the new owl statue save points, which is a slight improvement over the save system of the original game. Add to that a much improved Bomber’s Notebook that will greatly help keep track of all your quests, jot down rumors you’ve heard, and even set alarms, which is useful for a game so dependent on time.