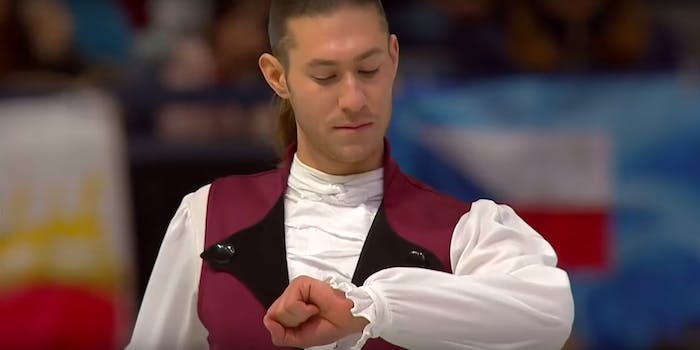 American figure skater Jason Brown is taking this 'Hamilton'-inspired program to the Olympics.

Jason Brown is one of America’s top figure skaters, and he’s also a huge Hamilton fan. This season, he decided to combine his two favorite things by creating a program to the Hamilton song “The Room Where it Happens.”

For those who aren’t avid skating fans, here’s the deal. Figure skaters typically prepare two competitive programs each season, showcasing their jumps, footwork, and artistic ability. Until recently, they were only allowed to use instrumental music, meaning we saw a lot of old-fashioned classical programs and cheesy European techno remixes. Then the International Skating Union relaxed the rules to allow music with lyrics, revitalizing the sport with more mainstream music options.

Brown is an unabashedly fun skater, combining medal-winning skills with an enthusiastic stage presence. Basically, he’s perfect for Hamilton. He competed with his new Hamilton program at Skate Canada this weekend, and wound up winning silver.

Brown will represent Team USA at the 2018 Winter Olympics in February, meaning Hamilton is about to make its Olympic debut. Yet another thing for Lin Manuel Miranda to tick off the bucket list!