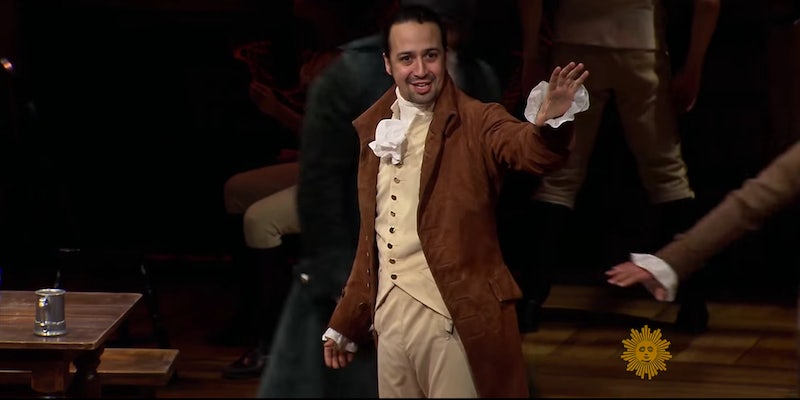 These are the fanfics ‘Hamilton’ fans want for Yuletide

Lock up your daughters and horses.

What time is it? Yuletide! And we don’t just mean Christmas. Fandom’s largest and longest-running annual holiday fanfiction exchange is happening this week, and we thought we’d take a look at the kinds of things people asked their fandom Santas for. This year, the present everyone wanted most was Hamilton.

Hamilton clocked in with the most requests for Yuletide. What a world we live in.

Yuletide is a rare fandom fanfiction exchange, which means participants request and write fanfiction for a bunch of super-tiny fandoms. On Christmas Eve, the presents are revealed and everyone gets to enjoy a fanfic for their under-appreciated fandom of choice. The challenge usually draws between 1,500–2,000 participants annually; this year, 1,900 fans churned out 2,600 stories in 1,500 fandoms.

The main criteria to qualify a fandom as “tiny” is that it have less than 1,000 fanfics written for it on Fanfiction.net and the Archive of Our Own combined. That means that every year a super-popular new fandom is eligible for Yuletide because, despite its popularity, it’s too new to have generated more than a thousand works.

This year, that fandom is Hamilton. When all was said and done, Hamilton racked up a whopping 88 requests, far more than last year’s most popular fandom, Brooklyn 99.

The coolest part about the sudden surge of popularity is that many fans are specifically requesting that the characterizations and depictions remain the way they are in the Hamilton cast—in other words, no describing A.Ham as lily-white. Hamilton fandom is also all about the complicated three-way relationships Hamilton shares in the musical. Most shipping requests focus on the two Schuyler sisters—his wife Eliza and her independent sister Angelica; his friend John Laurens, who historians have theorized had a bisexual relationship with Hamilton; or the prickly political relationships he had with Thomas Jefferson, George Washington, and James Madison—and, of course, Aaron Burr.

With AO3 already boasting over 600 fics for the fandom, this is likely Hamilton‘s only year as a blazing Yuletide star. So we’re not throwing away our shot to commemorate the best, funniest, funnest, and hottest ideas for Hamilton fanfic. Here are some of our favorite prompts from the crop of fic requests, which range across all characters, ships, and kinds of fanfic. In a nutshell, it’s fandom at its most enjoyable.

1) The room where what happens?!

This saucy request for a political hate-sex triangle totally blew our minds, and now we have a whole new additional layer of subtext to consider when we think about the show’s biggest number:

“The Room Where It Happens” is totally about sexual favors, yes? When Hamilton recited all his assets he forgot to include his body. Jefferson reminds him. Hamilton is outraged. In the end, Hamilton loves his country enough to do whatever it takes to get his plan on the Congress floor. Burr would like to be in the room when it happens. Possibly there is presidential pressure to deliver. (And I mean, also: “You got more than you gave” / “And I wanted what I got.” Wow.)

This is what we call thinking outside the box—multiple Yuletiders requested a Hamilton space AU:

I’d love angsty fic about Alexander and Angelica and their thwarted love throughout the years. Or happy fic where the Schuyler sisters do get Alexander to take a break, and then things happen when the night gets dark. OR all/any/none of this happening, but on Mars, as the colony revolts. (Why should a tiny planet across the sky regulate the price of chai?)

SPACE AU… I love the idea of revolution in space. Mutiny on a space station! And/or a cyborg uprising (with our heroes as the cyborgs, of course)! And/or Jefferson in a hot pink space suit! Show me some characters fighting for freedom (or trying to manage their country in the aftermath of fighting for freedom) in space, and if you can work in some space makeouts, so much the better.

A++ would read any and all of these epic revolutionary space operas so hard.

3) Hamilton getting banned from social media

Hamilton’s story is laced with tragedy—one Yuletider calls it “a richly upholstered death shoebox.” And so we have this delightful prompt asking for our favorite founding father alive and well on modern social media. Given that Hamilton will fight anyone including himself, we know the likelihood of him getting into trouble is high. Thankfully one thing he wouldn’t be doing, presumably, is dying, which is what makes this prompt pretty great:

The chief evidence for real-life Hamilton’s relationship with Laurens is that they wrote one another saucy homoerotic letters brimming with sexual innuendo, penis jokes, and effusive expressions of love. We’ll probably never know whether this was just the 18th-century equivalent of ‘bros before hos’ or whether there was more going on, but as this prompt for queer epistolary courtship proves, it’s a timeless subject.

I am going to be both unoriginal and absolutely frank with you here: I want SEXY LETTERS. The lost romantic correspondence of Alexander Hamilton. Historiographic nerdery… [T]hey don’t have to be sexy sexy letters, either; they can be romantic with a sprinkling of innuendo if that’s more your speed. Or they can be raunchy and explicit as all get-out. Up to you. Personally I think Hamilton’s grasp of language could swing either way (*rimshot*).

A hilarious number of Yuletiders want to ship Hamilton with everyone, because that’s just kind of what Hamilton, the musical, does to you. Our favorite examples:

I want to do things to Alexander Hamilton (and Lin-Manuel Miranda when he’s playing Hamilton), and I’m not alone in this, so basically I’d like fic of people wanting to do Hamilton and/or doing him.
….

I am fascinated by Alexander’s relationships. Most specifically, with Eliza and Angelica Schuyler, and with John Laurens. (And about fifty other people, but Yuletide asks us to keep it to a dull roar, you know?)

….
God, american history is the trashiest historical romance ever written and i love it… but really, i would love hamilton/LITERALLY EVERYONE IN THE MUSICAL.

The Hamilton fandom loves the two older Schuyler sisters, Angelica and Eliza, and the way they love and support each other. But we had to give a shout-out to this request that remembers the other of the three Schuyler sisters we meet in the musical—Peggy, the youngest. In the Hamilton casting notice, she’s described as being the Michelle to Angelica’s Beyonce and Eliza’s Kelly—often forgotten but still awesome. This Yuletider gets it:

I truly, madly, deeply adore everything about the Schuyler sisters in the musical. Eliza is a lady in every sense of the word: kind, decorous, and possessed of the quiet determination that keeps a household running. Angelica combines fierce intelligence, pragmatism, and compassion to become a woman who will never be satisfied with the limits of polite society. Peggy presents very much as the baby of the family in the musical, but she’s right there singing work, work with her sisters, who I imagine she idolizes despite fearing the violence of revolution. I would read anything about the relationship between the sisters: growing up together, seeing each other through the Revolutionary War, an AU where some or all of them are superheroes, ANYTHING.

Because Hamilton is a hip-hop musical written with a mix of modern language and 18th-century syntax, a common theme of the Yuletide requests have involved fans either requesting fic written in a particular style, or assuring writers that they don’t have to write in a certain vernacular. However, there have been a few requests that explicitly ask the writer to build on the musical’s rap language:

Another fan went in a slightly more meta direction:

The cast member I’d love to see bound and struggling in your fic is not an individual character, but rather Lin-Manuel Miranda’s language, in all its satiny, polyvocal overflow: I’m not craving historical RPF so much as I am a very particular relationship to history, historiography, and America as an ideal–that is, to the imaginary nation that might or might not hover atop “America, constellation of nerds.”

The cool thing about this musical (and this fandom) is that this way of thinking about the story makes total sense.

8) Hamilton as a catboy

Catboy!Hamilton (after all Martha Washington named her feral tomcat after him!) – because cat ears and tails make everything better. No really, they do!

Or what if Hamilton actually IS Martha Washington’s cat, and he’s just too good at his writing and debating and letters and rapping so no one realizes because they’re all stunned by his genius?

We just spent a few minutes searching in vain for catboy Hamilton fanart, and our inability to find it has convinced us that this needs to exist.

9) All of them witches

This prompt pretty much speaks for itself:

A Hamilton AU featuring witchcraft and other paranormal stuff. (Are the Schuyler sisters witches? Is Hamilton? Burr? I dunno, I have this witch thing about this show, but Hercules Mulligan is probably a werewolf.)

Keep the amazing ideas coming, Hamilton fandom—and whether you’re into the show or not, have a merry fandom holiday.