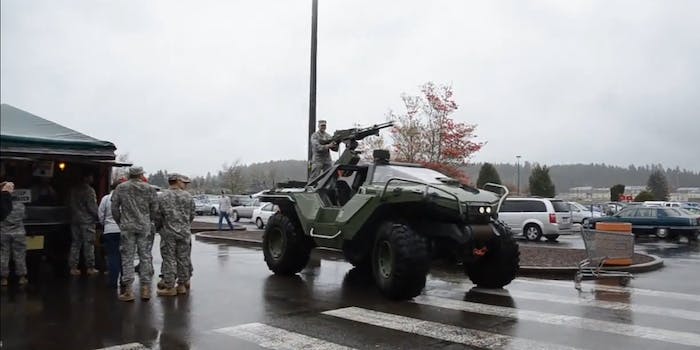 has science gone too far?

U.S. military base gets a visit from a ‘Halo’ Warthog vehicle

If only its weapons systems worked.

It’s not every day that you see a video game brought to life.

Joint Base Lewis-McChord, outside of Takoma, Wash., recently hosted an unlikely visitor: a Warthog vehicle from the Halo video game series. The Warthog is an armored reconnaissance vehicle with an mounted anti-aircraft gun, and while it looks like a real combat vehicle in the game, it’s completely fictional.

But a handful of Warthogs were manufactured for live-action Halo spinoffs and promotional events, blurring the line between fiction and reality. That’s how a real Warthog came rolling up to JB Lewis-McChord like it was no big deal.

This particular vehicle was a visitor from Microsoft‘s Xbox team, which sent it there as a photo opportunity for Halo fans on the base.

Other Warthogs have been spotted before, dating back to 2007. At the time, Columbia Pictures was trying to make a Halo feature film, a project that involved Neill Blomkamp, Guillermo del Toro, and Peter Jackson at various points in pre-production. The studio eventually abandoned the idea, but we still got a few Warthogs out of it.

Screengrab via Has Science Gone Too Far?/YouTube