The ‘Halo’ movie is happening… but without Master Chief?

A long-rumored Halo movie is being filmed in Belfast, according to the Belfast Telegraph, but an important character may be missing.

The film, executive produced by Ridley Scott (director of Alien, Blade Runner, Black Hawk Down) and directed by Sergio Mimica-Gezzan (Battlestar Galactica, Falling Skies) is being shot in the Titanic Quarter of Belfast, Ireland, according to the Telegraph. Only other preliminary reports about the secretive project indicate Master Chief, the icon of the sprawling Halo franchise, isn’t in it.

The five games in the Halo video game franchise created by Seattle-based development studio Bungie are about an apocalyptic war between humanity and a Covenant of alien races who believe humanity’s presence among the stars is a religious affront. The Covenant, upon discovering humanity, begin wiping out our colonies by “glassing” them from orbit, or literally turning the surface of our colonies to glass by blasting them with superheated laser cannons.

Master Chief is part of an early generation of super soldiers, young children of superior physical and mental character who are kidnapped from their homes. Their harsh training, coupled with biological engineering, cybernetic implants, and advanced-powered combat armor turn them into Spartans. By the time the first Halo game begins, Master Chief is the last remaining Spartan alive after almost 30 years of genocidal conflict.

His green helmet and gold visor are practically synonymous with Microsoft’s gaming division. The original Halo was the system seller for the original Xbox. Halo 2 is largely credited with spearheading multiplayer gaming, previously the domain of PC gaming, onto game consoles with Microsoft’s Xbox Live service. Halo 3 was one of the first, big releases for the Xbox 360. And Master Chief was the symbol for all these games, looming large in ad campaigns and other marketing material.

So why wouldn’t he be the star of Ridley Scott’s Halo movie? 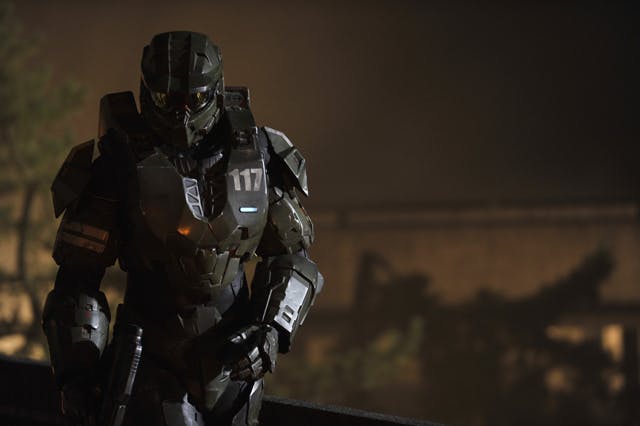 Once upon a time Neill Blomkamp, the director of District 9 and Elysium, was slated to direct a Halo movie. Alex Garland, the screenwriter of 28 Days Later and Sunshine, was writing the story, and you can see what is purported to be a draft of his 2005 screenplay for Halo here.

The movie never happened. Wired published a story about how, in 2005, a trio of men in Master Chief armor delivered a copy of Garland’s script via Creative Artists Agency to executives from Universal, Fox, New Line, and Dreamworks. The whole thing was the idea of Larry Shapiro from CAA.

Microsoft’s attempts to control the production—the actors in the Master Chief costumes actually stood there while executives read the copies of the screen—and their complete lack of understanding as to how the film industry functioned were, among other things, ultimately what killed the deal.

In 2010, Garland spoke to video game magazine Edge about his role in the aborted Halo movie, and wondered whether his desire to be extremely faithful to the original Halo game led to the studios turning down the project. In a 2013 interview with Empire, Blomkamp said that he bowed out of the project owing to an inability to imprint his take on the story. There were clearly a multitude of reasons why a Halo movie didn’t see the light of day.

Fans are still clamoring for such a film. When Master Chief made his first, proper live-action appearance in Part 4 of the Forward Unto Dawn webseries, it only served to whet fans’ appetites. Yet according to The Wrap, Scott’s and Mimica-Gezzan’s Halo movie being shot in Ireland follows a different super soldier who is definitely not Master Chief.

The Wrap cites an unnamed source, so we’re taking the news with a grain of salt, but it does make sense in the context of other Halo media projects in the works. Last year, during the reveal of their newest game console, the Xbox One, Microsoft announced a new Halo television series. Steven Spielberg is producing the series, which will be broadcast over Xbox Live, and the latest rumor is that Neill Blomkamp is slated to direct the pilot. It would certainly make sense if Microsoft were saving the Chief for an ongoing series.