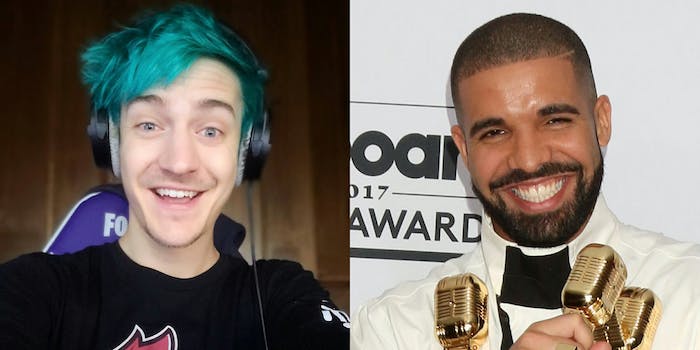 Drake may want to change his password for his Fortnite account. During a charity event with livestreamer Tyler “Ninja” Blevins, a hacker accessed Drake’s Epic Games login, partied up with the streamer, and began shouting the n-word during a round of duos.

While streaming for The Ellen Fund, a wildlife conservation fund created by Ellen host Ellen DeGeneres, Ninja received an unexpected invite from “Duddus647,” Drake’s Epic Games account. The invite seemed strange at first, as Drake’s account remained silent on the other end, and the rapper mostly plays Fortnite on PlayStation 4, not PC.

Then, after Ninja repeatedly reached out over voice and double-checked his sound settings, the user playing on Drake’s hacked account started shouting the n-word. Ninja quickly left the party, contacted Drake, and reported the issue to Epic Games.

“Dude, that is not okay,” Ninja said. “Yikes man… How did that guy get his account? I should’ve known, man.”

Some Fortnite players pointed out that the hacker purposefully targeted Ninja because of the streamer’s enormous profile. Ninja would jump at the opportunity to have Drake on again, especially during a charity stream, and his livestream gave the hacker a perfect opportunity.

looks like stream sniping went to a whole new level

Ur life must suck if you have enough time on your hands to go through all the trouble just for 5 seconds of being able to say the n word on someomes stream. All that just to be forgot about next stream lop

Need another reason to turn on your two-factor authentication? Someone pretended to be Drake in order to ruin a recent #Fortnite charity stream.https://t.co/ZZZrW36O5U pic.twitter.com/mIRzA2ItTt

This isn’t the first time Ninja has faced online controversy over his stream’s content. The Fortnite star previously said he refused to play with “female gamers” and rapped the n-word during a stream. Although Ninja isn’t directly responsible for Drake’s hacked account per se, it’s just another reminder that the streamer has a platform that he needs to police carefully, lest he slip up again.