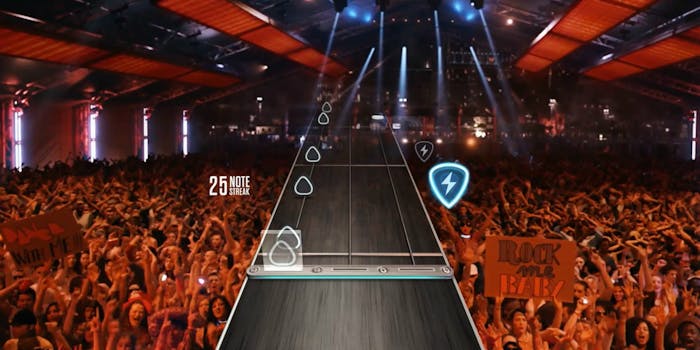 Serious skill challenge is at the heart of the new Guitar Hero.

Guitar Hero Live and Rock Band 4 both let you rock out in your living room with plastic guitars. But that’s where their similarities end.

Where Rock Band 4 is a party game at heart, Guitar Hero Live is primarily about skill challenge. The difference is perfectly expressed by the new controller design that shipped with Guitar Hero Live. Gone is the standard 5-button control scheme, replaced by a new 6-button setup that requires greater precision at the baseline difficulty level.

Guitar Hero Live also delivers its content in a unique fashion compared to other music rhythm games, incorporating live video in one mode and a video music channel system in the other.

Rock Band 4 and Guitar Hero Live feel more like complementary experiences rather than competing ones, but if you have to choose between one or the other, your decision will likely come down to whether you want to learn an entirely different instrument or not. 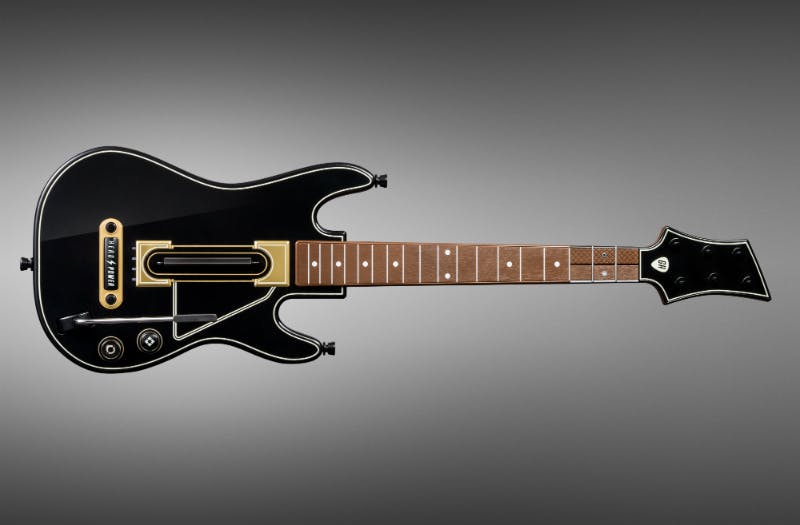 The traditional design for guitar controllers uses five buttons on the neck of the guitar that are color coded from left to right to match the notes on the music track. The Guitar Hero Live controller uses three columns (or frets) of two buttons each.

Most of the time you are only using buttons on the same row. Sometimes you have to lay a finger over both buttons on a fret simultaneously to play a chord. When things get really difficult you may have to hold bottom buttons on one fret and top buttons on another fret simultaneously, which is a fundamentally different sort of challenge than anything a five-button setup has to offer. 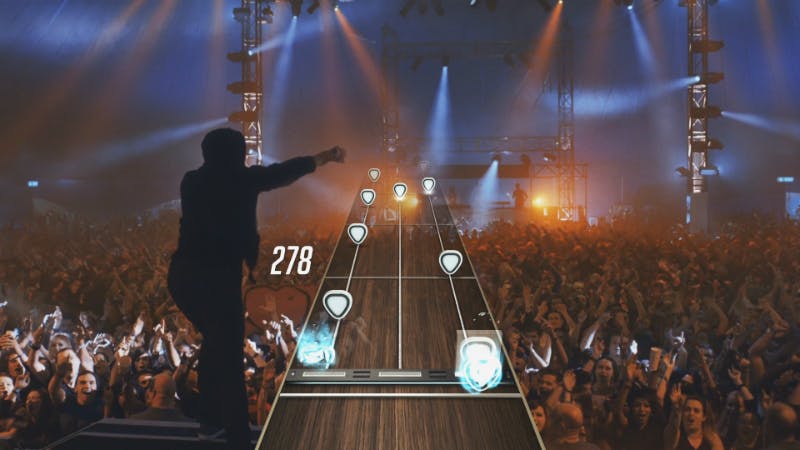 In Live mode you can play music sets that are 20 minutes long on average, while participating in one of two different music festivals. Each festival has multiple venues, and in each set you play as a member of a different fictional band playing in one of those venues.

The entire experience is shot on video from the first-person perspective of the guitarist, beginning with standing backstage, being cheered on and equipped by roadies, taking the stage with the other members of your band, and greeting the cheering crowd before kicking into the first song of the set.

You can also play in Quickplay mode, which cuts right to video footage for that song.

Each time I stepped onto a new stage for the first time and my perspective changed from looking at the drummer to turning and facing the crowd I was shocked at how many people were out there. There must have been at least a thousand people at every venue.

I couldn’t say whether they were all real versus computer-generated images, but the crowds certainly looked real enough that I wouldn’t have been able to tell if the latter were true.

The other members of your band are playing and singing each song in the set as if they were a cover band, but Guitar Hero Live lays the original tracks over the performance. The Guitar Hero Live user interface, i.e. the notes and the other screen elements that make up the music “highway,”are then laid over the video.

You’ll hear the audience singing along with you, and if you steal a look down at the crowd you’ll see people actually mouthing the correct lyrics. It’s a wild experience. If each of the sets were not shot as one contiguous take I certainly couldn’t tell.

If you’re playing really well and then start to screw up, the mood of the crowd will change. The video will blur slightly and when it comes back into focus, the crowd will be scowling at you instead of cheering you on. Rather than looking like they’re having a good time, the other members of your band will also be scowling and giving you dirty looks.

If you then pick up the performance and begin playing the song correctly the video blurs slightly again, and when it comes back into focus the crowd will be cheering, the other members of your band will happy, and all will be well.

You generate Hero Power badges by playing specific sequences of notes perfectly and you can stack the badges up to use whenever you need them. Spending a Hero Power is a quick way to get the crowd back on your side if they’re turning on you after you’ve made multiple mistakes.

Live mode is goofy in a fun way. Were the bands actually playing the songs during the shoots or just pantomiming music played over a PA system on set? I also kept imagining all those actors in the front rows of the audience being told to cheer and look happy during each of the shoots.

Guitar Hero Live became a decidedly less-fun experience when I was failing compared to when I messed up in other music rhythm games. Was I really volunteering to have real people in a crowd yelling at me and to be surrounded by disgusted band mates while trying to learn a difficult, new instrument?

I also sometimes felt like the video was more of a distraction than anything, fun for someone watching the game but not playing. I had to spend most of my time paying attention to the music.

One unadulterated positive of Live mode is that several of the bands are composed entirely of female performers. It was nice to see women not being underrepresented in the various bands I pretended to be a part of. 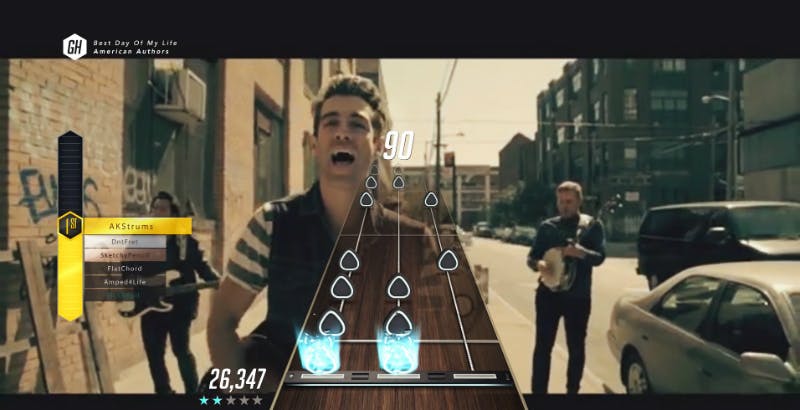 TV mode, or Guitar Hero TV, is more or less old-school MTV without host segments or commercials and with the Guitar Hero user interface superimposed over the videos. You either play through prearranged sets of songs or purchase songs one at a time via credits called Plays.

Every time you play a song you earn Status and Coins. The better you play, the larger your rewards. Status goes toward raising your level, and every time you hit a new level you are awarded some Plays. Coins can be used to purchase blocks of Plays. Finally, you can spend a third currency called Hero Cash, that requires a real money microtransaction to purchase additional Plays.

It doesn’t cost you anything to play one of the GHTV channels that broadcast blocks of songs. One night during my play through, Channel 1 from 6:00pm to 6:30pm was Top Picks, from 6:30pm to 7:00pm was Rock Top Hits, and from 7:00pm to 7:30pm was Metal Odyssey, for example.

Once you hook into a channel you play an endless stream of videos with only a break at the end of each video to tally your Status and Coins. You can drop out whenever you want, and the video will keep playing until you decide to jump back in.

If you’d rather play individual videos instead of tuning in to a GHTV channel you have a starting catalog of 200 videos to choose from. You can play them one at a time, or set up playlists. Starting each video costs you one Play. You can pause a video but if you quit before the song is over you are still charged for the Play.

Casual players can probably earn enough Status and Coins to always be able to play a few songs every day. I played considerably more than that and was still never in danger of running out of Plays during my review play through.

Hardcore Guitar Hero Live players on the other hand will have to pay more attention to how many Coins they earn and how quickly they raise their Status level, or they may have to consider buying some Hero Cash. 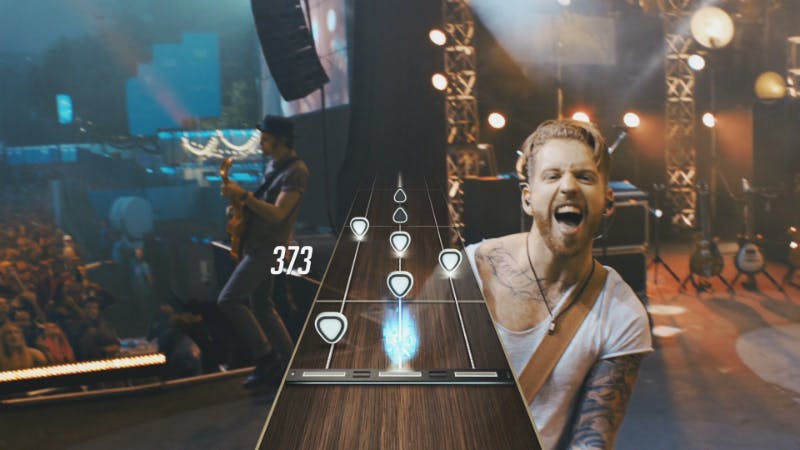 Hangar 18 by Megadeth is one of my favorite Guitar Hero/Rock Band tracks ever. I can usually handle it on hard difficulty, using a traditional five-button controller.

I tried for about 30 seconds to play Hangar 18 on Regular difficulty in Guitar Hero Live before I gave up and changed the difficulty back to Casual, which was too easy. Even then having to play only three small buttons without letting my fingers slip was still a challenge because I think I pulled something during one of my hours-long play through sessions.

Guitar Hero Live pushes aside a controller design that served the genre for a decade, which means it also invalidates all the muscle memory you’ve built up over those 10 years if you’re a fan of the genre.

I understand FreeStyleGames and Activision wanting to differentiate Guitar Hero Live from Rock Band 4. I think the incorporation of live video and Guitar Hero TV would have been enough to provide something new without messing with the controller.

The question is whether you want a music rhythm game that lets you pretend to be a rock star and is more concerned with illusion than finger-skill, or a game that is more punishing and less about pure fantasy. Guitar Hero Live is not a game I would introduce my casual gaming friends to if we wanted to hang out and pretend to be rock musicians.

You also have to be okay with not actually owning any music. Guitar Hero Live feels like DRM principles applied to the music rhythm genre. The music isn’t yours, you’re just renting it as you have the resources available to do so, if you want to play what you want instead of dealing with prearranged sets of songs running on GHTV.

Considering that the differences between Guitar Hero and Rock Band games have usually come down to music selections it’s nice to see that music rhythm game fans have some more diversity within the genre.

If skill challenge is your motivation, Guitar Hero Live will demand much more of you by default. If you’re looking for a party game consider the regulars on your guest list and their level of frustration tolerance.

Disclosure: Our Xbox One review copy of Guitar Hero Live was provided courtesy of Activision.