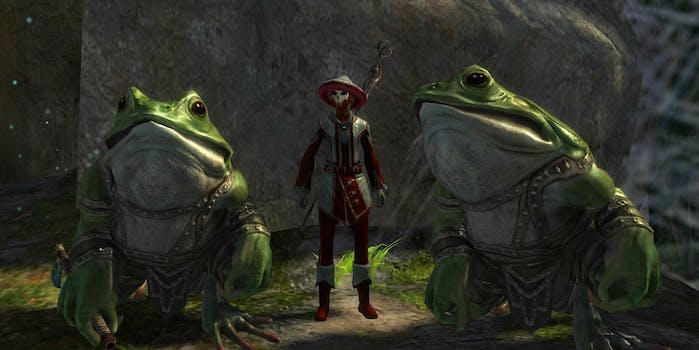 The industry is not happy with ArenaNet's decision to fire a writer who faced harassment.

Members of the video game industry are speaking out after the controversial firing of two writers on the Guild Wars 2 team.

Developer ArenaNet fired Guild Wars 2 writers Jessica Price and Peter Fries after Price responded critically to a tweet from a YouTuber and Twitch streamer. The user, named Deroir, disagreed with Price about the nature of writing for MMOs versus single-player games.

Price said Deroir’s response was an example of “mansplaining,” an issue she had tackled with as a writer for years. Fries, her co-worker, chimed in to show his support for her. One day later, both were fired by ArenaNet, and internet trolls rejoiced.

Now, members of the games industry—both big and small-scale—are speaking out in support of Price and against ArenaNet for what they perceive as exalting toxic community members.

“By handling the situation the way they did, ArenaNet told-literally told-community members that their desires were more important than anything else,” tweeted Jen MacLean, executive director of the International Game Developers Association.

By handling the situation the way they did, ArenaNet told-literally told-community members that their desires were more important than anything else.

MacLean’s criticism focuses on the implication that standing up for yourself against harassment is now evidently grounds for dismissal at a company like ArenaNet. MacLean also theorized that simply receiving enough criticism from a game’s community might become grounds for worrying about your job security, tossing even more stress on top of an already stressful position.

“And yes, of-fucking-course this incident will impact how devs interact with the community,” MacLean wrote. “Why risk it? You’re not just opening yourself up to personal attacks and abuse any more. You’re now putting your job-potentially your home, your health insurance, your life on the line.”

Giant Spacekat co-founder and congressional candidate Brianna Wu said the controversy is an example of why game companies need to support their employees.

“Comments like this are why game companies need to HAVE THEIR EMPLOYEES BACKS,” Wu tweeted. “Because this is a toxic field that is only getting more toxic. The outcome of firing Jessica Price is every woman developer will have to stay silent when receiving sexist abuse.”

Wu also said she had previously witnessed Price stand up “to some of the worst people working in game development.”

Hazel Monforton, a narrative designer on Dishonored: Death of the Outsider, shared a screenshot of a tweet from a user claiming that because of her opinion on the controversy, they would no longer support developer Arkane Studios.

Other Arkane Studios and Bethesda Softworks employees spoke up on the issue. Bethesda narrative designer Sophie Mallinson criticized the game community’s fawning over brands and companies rather than contending with the fact that games are made by a collaborative group of people.

i think maybe the most unsettling thing about the #ArenaNet debacle is seeing marketing buzzwords like "customer", "ambassador", and "partnered content creator" being used as if they carried some indisputable moral weight

Pete Stewart, a writer and narrative designer for the Total War franchise, said it would be “a profound loss” if Price and Fries exited the industry because of the incident.

“Something has to give here,” he said on Twitter. “You can’t just let the mob win like that.”

Katherine Cross, a noted sociologist and Gamasutra columnist, criticized ArenaNet’s actions as letting “the genie out of the bottle once again to haunt us all, emboldening a kakistocracy of outraged consumer kings.”

Cross devoted a number of tweets to dissecting the “hypocrisy” of the people who called for Price’s firing. As Cross put it, gamers have long prided themselves on “fuck your feelings” culture but now get to decide it’s appropriate to balk over retaliatory criticism from a developer, maximizing pressure against companies and individuals they deem worthy of harassment (aka, women and men who stand up for women).

In reality, a vocal and hyperactive minority were looking for a reason to take her down from day one because outspoken women who don't coddle them *do* indeed scare them. All their internet tough guy posturing masks that deep-seated terror.

Vlambeer developer Rami Ismail commented on the 24/7 nature of indie development, saying that nature is marred by fanbase expectation in the world of major game studios.

Here I thought being indie meant I was on-the-clock 24/7, but apparently AAA means just that but also being forced to take whatever shit people fling at you because 'standards of communicating with our community' and 'we make the game for you (so feel free to give our devs shit)'

Steven Spohn, chief operating officer of The AbleGamers Foundation, a charity that works to make video game more accessible for those with disabilities, also criticized ArenaNet as the only major developer to declined to adding the organization’s accessibility options.

ArenaNet is also the ONLY developer who has ever declined to add our accessibility options because "it would change the atmosphere of the game" after some devs liked our ideas.

Super dangerous ideas such as "add mouse sensitivity" and "allow camera shake to turn off" https://t.co/Bhnz6T5AaT

The controversy, four years after GamerGate, makes it clear the industry is still tackling issues of harassment and customer entitlement—and women are often finding themselves on the chopping block. ArenaNet has not responded beyond its initial statement announcing Price and Fries’ firing.