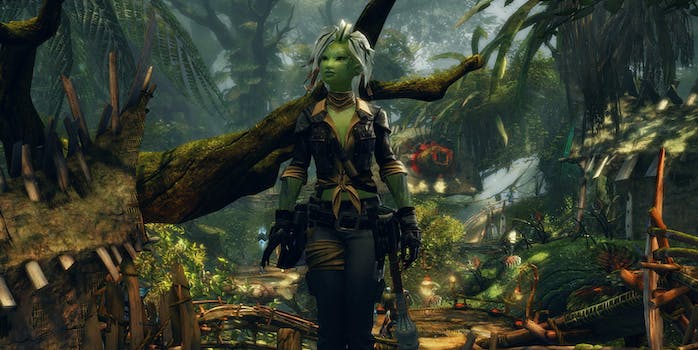 ArenaNet sided with an internet mob who objected to a handful of feminist tweets.

Video game developer ArenaNet just fired two writers for arguing with fans on social media. Not because they harassed anyone or said anything egregiously offensive, but because they called out a Twitch streamer for mansplaining.

Jessica Price and Peter Fries both wrote for the fantasy MMORPG Guild Wars 2. According to Eurogamer, Price had worked at ArenaNet for almost a year, while Fries had worked there for more than 13 years. Their firing provoked an outcry in the gaming community, sparked by the seemingly minor nature of their offenses.

The dispute began on July 3, when Price tweeted about the difference between writing a character for an MMO versus a single-player game. YouTuber and Twitch streamer Deroir responded to disagree, explaining how he thought MMOs could improve their character-based storytelling. Price was unimpressed, replying, “thanks for trying to tell me what we do internally, my dude 9_9.” Then she quote-tweeted him, highlighting a common problem among women who try to express their expertise online: mansplaining.

Today in being a female game dev:

"Allow me–a person who does not work with you–explain to you how you do your job." https://t.co/lmK0yJWqGB

Price said she would block the next “rando asshat” who tried to explain her own job to her, and her co-worker Peter Fries chimed in with some support. This storm-in-a-teacup dispute spread, with more gamers criticizing Price’s attitude. By this point, it was July 4, with Price and Fries both pointing out it wasn’t their job to handle disgruntled strangers on their day off. “I’m not your emotional courtesan just because I’m a dev,” wrote Price, defending her Twitter feed as a personal space. Neither of their social media posts got any more contentious than that.

The attempts of fans to exert ownership over our personal lives and times are something I am hardcore about stopping. You don't own me, and I don't owe you.

On July 5, ArenaNet co-founder Mike O’Brien posted on the Guild Wars 2 forum to say that Price and Fries had both been fired.

“Recently two of our employees failed to uphold our standards of communicating with players. Their attacks on the community were unacceptable. As a result, they’re no longer with the company.

I want to be clear that the statements they made do not reflect the views of ArenaNet at all. As a company we always strive to have a collaborative relationship with the Guild Wars community. We value your input. We make this game for you.”

A day later, ArenaNet doubled down with a second statement saying:

“We strive to cultivate an atmosphere of transparency around the making of our games and encourage our teams to be involved in open, positive discussion with our community. Earlier this week, two of our employees failed to uphold our standards of communication with our players and fans, and they are no longer with the company.”

This seems like a wildly overzealous case of damage-control, considering the fact there was barely any damage in the first place. Price and Fries didn’t post anything offensive or overly aggressive; barely a blip compared to some other video game controversies. If anything, they had to handle backlash outside their job description—a particular problem for women in the games industry.

Meanwhile, on the Guild Wars 2 subreddit, people are calling this a “huge win for players,” proving that ArenaNet’s allegiance lies with gamers over employees. However, it’s hard to know whether the people who spread the Twitter controversy this week actually are Guild Wars 2 customers, or if they just enjoy policing women’s behavior online. There’s already a precedent for astroturfing campaigns in the gaming community.

By firing these two writers, ArenaNet drew far more attention than the limited audience of original Price’s tweets, resulting in a more wide-ranging backlash against the company itself. Judging by the response on Twitter, people are not impressed by ArenaNet’s failure to stand by its employees.

"Nobody at ArenaNet is safe from the hand of reddit"
Every single one of us working in the games industry should be concerned by this decision. But our concern needs to lead to action. This is just one of the reasons why we need unions. https://t.co/FR5sMOgWHk

Wow. I'm hearing @ArenaNet are so scared of Z-lister youtube boy outrage that they fired her over this tweet.

Important news for any would-be employees: they will not stand with you when you get targeted for internet harassment. They will throw you under a bus within 24 hours. https://t.co/bzYcy91qlg

It’s depressing to see that four years on from Gamergate, the gaming industry still doesn’t know how to handle this kind of situation. Instead of supporting its employees, ArenaNet sided with an internet mob who objected to a handful of feminist tweets that were, at worst, kind of rude. This is a career-damaging move against both writers, and it’s hard to see how it benefits anyone involved.