A delicious guide to ‘Hannibal’ fandom on Tumblr

Enjoy it with a nice glass of Chianti.

When your favorite shows are on hiatus or the latest blockbuster movie turns out to be a flop, that’s when summer fandoms come into play. And this year’s summer fandom is NBC’s Hannibal.

For now, let’s take a look at some of the reasons why Tumblr can’t shut up about a TV show about cannibalism.

It’s really easy to get into.

“Ah, yes, my psychiatrist, Hax Murderer. He has been helping me profile this ax murderer.” — congragratulation

Some fandoms do become popular over night, but it helps to have a little background beforehand. Teen Wolf was well into its second season before its popularity exploded, while Hannibal has a whole franchise of books and films behind it. Luckily, the new TV show requires no knowledge aside from, perhaps, an awareness that Hannibal is a cannibal. (Apologies if we spoiled that one for you.)

Interestingly, Hannibal fandom doesn’t particularly focus on the gay subtext angle that one might expect from a show about the intense cat-and-mouse relationship between a handsome serial killer and the squirrelly-yet-cute Hugh Dancy (Will Graham). Sure, there’s a bunch of Will/Hannibal fanfic, but not to the extent that John/Sherlock shippers took over Sherlock fandom, or Teen Wolf is ruled by Sterek (Stiles/Derek) fans. Maybe it’s because Hannibal features an unusually high number of admirable, well-written female characters. Or maybe it’s because when Hannibal looks at Will like he wants to devour him, it’s not homoerotic subtext so much as… well, cannibalism.

“Hello, I’m Cannibal! OH HAHAHA I MEAN HANNIBAL what a funny slice of the tongue. SLIP OF THE TONGUE WOW THERE I GO AGAIN. Anyway, what a pleasure to eat you. MEET YOU ha I did it again how odd.” — bastardfromabasket

Hannibal itself is a serious, critically acclaimed show starring a Cannes Best Actor award-winner in the lead role. However, the character Hannibal has kind of a trollish sense of humor. Not an episode goes by without Mads Mikkelsen smiling serenely through a blatant cannibalism pun (“I’m having an old friend for dinner”), and fandom took this idea and ran with it. In between shielding their eyes from the horrors onscreen, a popular game among Fannibals is working out which foodstuffs are made from people. (Answer: practically all of them.) 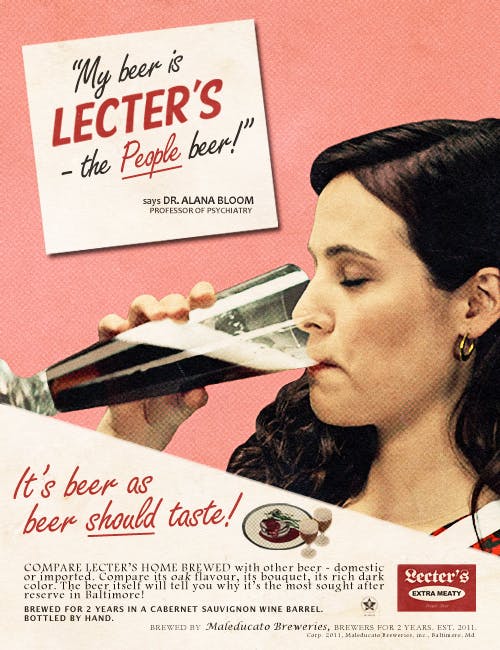 So, while the show is undeniably traumatic—featuring regular appearances from dismembered corpses and human steak—the fandom lets off steam with Comic Sans memes, ironically cutesy commentary, and videos like this. And this:

Of course, things weren’t helped along by the fact that the show’s Korean promo trailers are really… sparkly. They show Will and Hannibal surrounded by cartoon hearts, like the protagonists in an anime show aimed at pre-teen girls. And there’s a voiceover from Hannibal boasting about his fame and describing Willl as his “best friend.” It’s like someone distilled Tumblr fandom’s pure essence and expressed it in official TV trailer format, sprinkled with a liberal dose of animated stars and sparkles. 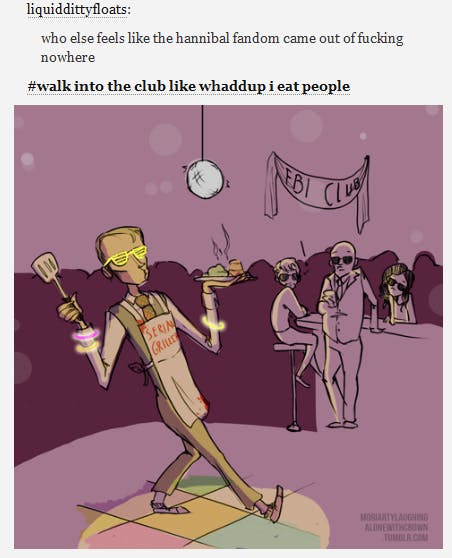 The showrunners know how the Internet works.

My Husband: “What is Hannibal?” Me: “A cooking show.” — @Melapaloosa

After the cult success of Wonderfalls and Pushing Daisies, showrunner Bryan Fuller is no stranger to fandom. His Twitter is full of retweets from fan artists, and he cheerfully indulges shippers who want to see his character get together, but without getting involved enough to break fandom’s fourth wall. 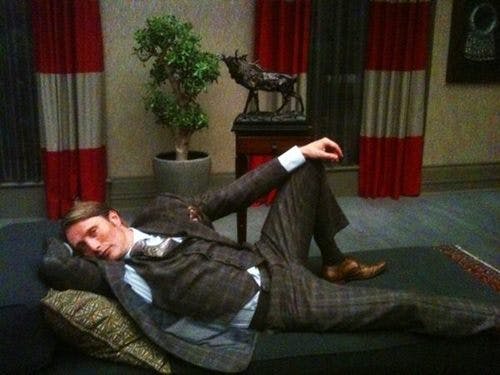 Rather than acting precious about the perceived seriousness of their show, Hannibal’s creators seem to share their fans’ quirky sense of humour. When famed carpet nerd Hugh Dancy nails a scene on set, he’s treated to a chorus of Drake’s song “Fancy”, with the lyrics changed to “Oh, Hugh Dancy.” And his co-star Kacey Rhol (Abigail Hobbs on the show) reblogs Hannibal content on Tumblr and reads fanfic.

Most impressively, Hannibal is one of the vanishingly few shows whose official Tumblr account reads like it’s written by someone in fandom rather than a soulless PR hack, a trait that it shares with—you guessed it —Teen Wolf. Our favourite little detail is that the heart-shaped “Like” symbol on NBCHannibal’s Tumblr page is shaped like an actual human heart.

But the best behind-the-scenes content has to got to be the blog run by the show’s food stylist. Feeding Hannibal is read by thousands of Fannibals, both on its own site or on Tumblr, and offers incredibly detailed (and illustrated) insights into the show’s many, many food-related scenes. Fans joke that that Hannibal is a cooking show, but really, it kind of is. While the episodic crime storylines are something of an afterthought to the long term Will/Hannibal plot arc, every single episode features Hannibal cooking beautiful gourmet meals and serving them to his guests. Never mind that he describes them as “tongue” or “liver” (no animal specified, of course)—they look delicious, and Mads Mikkelsen always prepares them while wearing terrifyingly stylish three-piece suits. No wonder the fandom is so visually oriented.

The fan art is ridiculously amazing.

On top of his more well-known hobby of viciously murdering people and eating their internal organs, Hannibal is a renowned aesthete. Fittingly, his latest onscreen adaptation is more stylish and visually complex than any before—surpassing even Anthony Hopkins’ famous “fava beans and a nice Chianti.” As well as the exquisite food scenes, the sets, costumes and soundtrack of Hannibal are designed to be within an inch of their lives. One character wears an outfit that looks like meat; Hannibal’s library features red-and-white striped curtains that look like a butcher’s pole; two scenes include set designs copied exactly from The Shining. 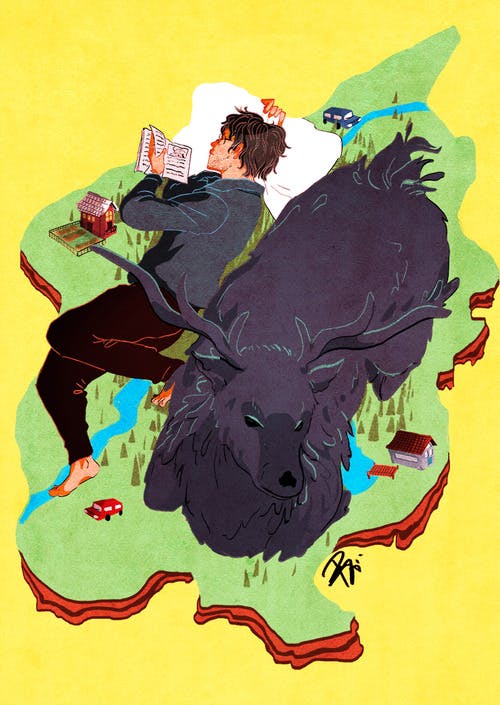 With Bryan Fuller describing Hannibal as a Francis Bacon painting and Will as an Edward Hopper, Hannibal was primed to become one of the most artistic fandoms ever. Not only are there multiple paintings inspired by Francis Bacon, much of the fan art shows considerably more complexity than mere depictions of the characters (although this fan-made graphic novel adaptation is astonishingly good). One abstract artist takes inspiration from the psychological themes present in Will and Hannibal’s relationship as patient and therapist, while others concentrate on the ghostly stag that haunts Will’s dreams—a hint unwittingly picked up from a stag sculpture lurking in the background of Hannibal’s office. Some even paint Hannibal as the monster he really is: 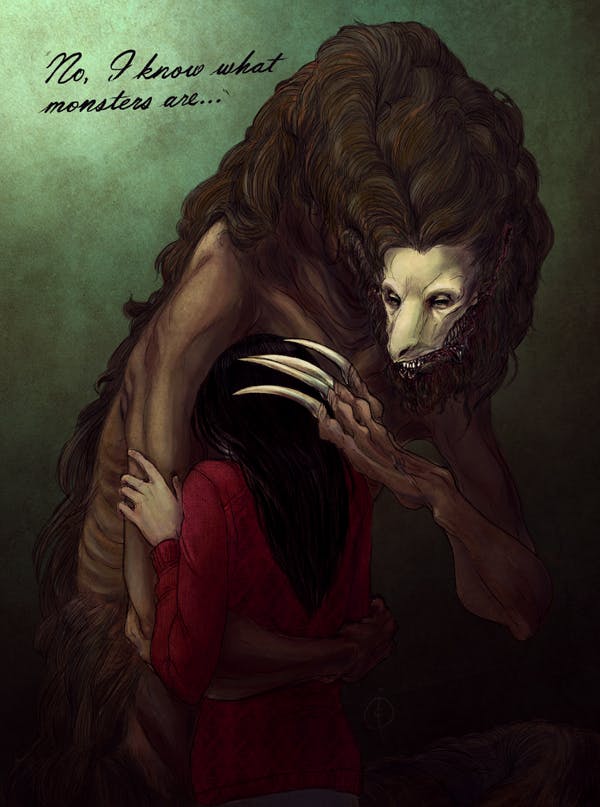 Like any online community, Hannibal fandom does have its conflicts and controversies. We’ve already written about how some old-school Hannibal fans are disgusted by TV fandom’s love of gay fanfic, although that mostly seems to have died down by now. The latest problem is the threat of an invasion from “Superwholock” (Supernatural, Doctor Who, and Sherlock) fans, who are widely viewed to be the scourge of Tumblr. At the moment, most people seem to be treating the idea of a Hannibal-Superwholock crossover as a punchline, though—maybe because up until recently, the show’s real enemy was cancellation.

Yes, despite critical acclaim and a frighteningly enthusiastic cult following, NBC held off for several weeks before renewing Hannibal for a second season. Thursday night saw Fannibals spamming Tumblr and Twitter to express joy at the last-minute renewal, which gives viewers at least 13 more episodes to watch Hannibal lovingly torment Will Graham into a nervous breakdown. Which is just as well, really, since Hannibal fandom’s ideas for a renewal campaign were pretty disturbing. 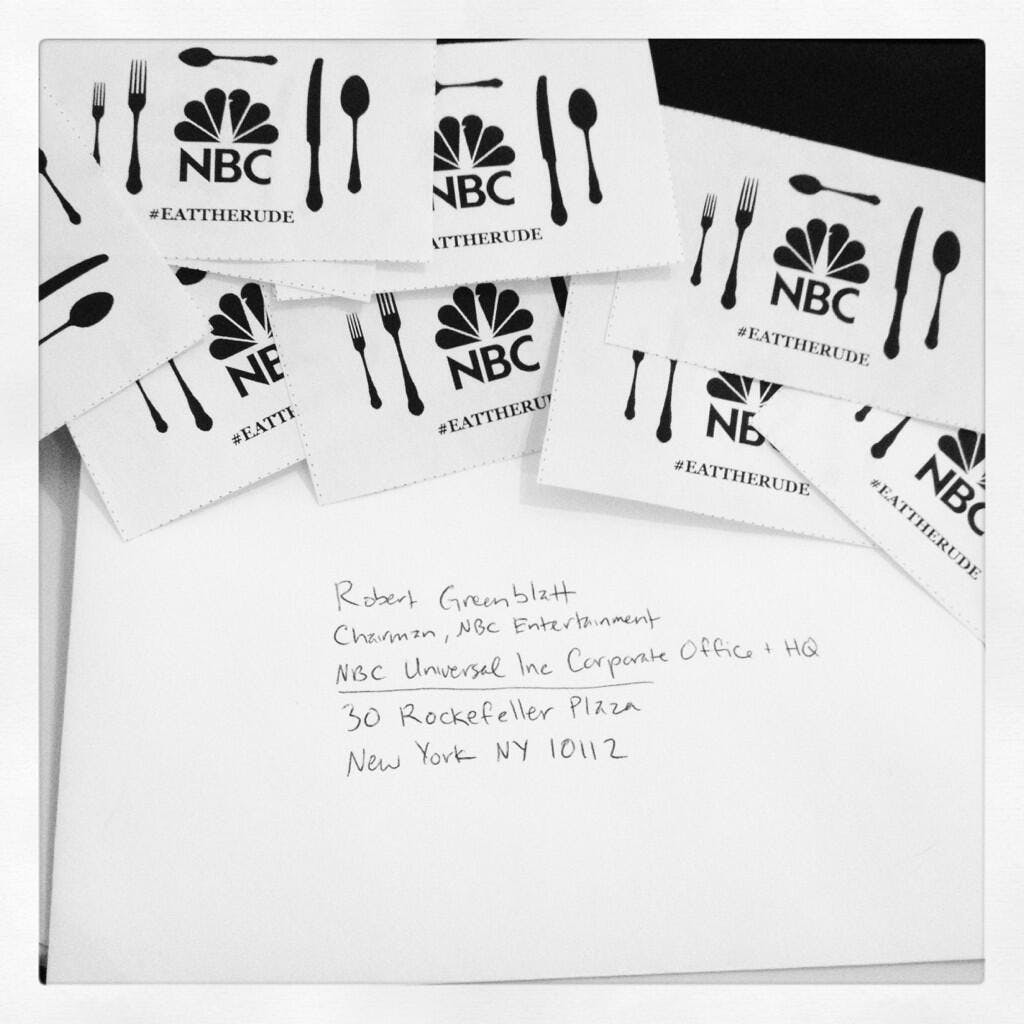