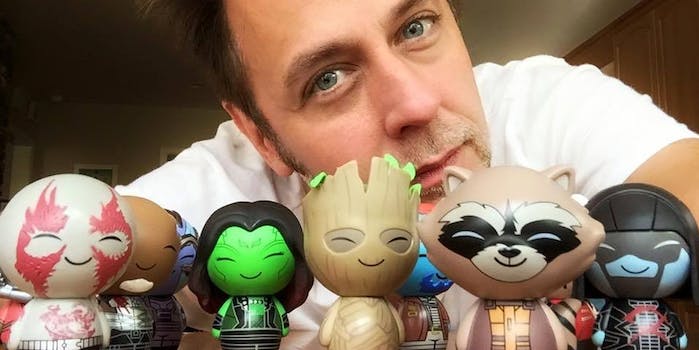 Direct James Gunn says there one more secret waiting to be discovered.

Despite numerous attempts at breaking down all of the Easter eggs in the Guardians of the Galaxy film, director James Gunn insists that there’s still one more fans haven’t found.

And it’s a biggie.

Over the weekend, while sharing photos from a going-away party he had before starting production on Guardians of the Galaxy 2, Gunn indulged in a two-day comment session with fans.

At one point, a fan asked, “[H]ave all the Easter eggs in GOTG been revealed? A while back you said there were still quite a few, if not when can we expect them to be revealed?”

Gunn answered, “They have not all been found. No one has found the big one, really. Maybe once someone came close.”

This isn’t the first time Gunn has insisted that there was one huge Easter egg yet to be found out of the dozens fans have unearthed in the film. But it’s been nearly a year since that first interview, and apparently fans still haven’t found whatever it is.

Geez, James, maybe give us a hint? In the past, he’s shown off examples of visual imagery from the film, like this one:

#gotgpicoftheday One of the panels in the temple on Morag. #gotg #guardiansofthegalaxy Blu Ray out in the UK today!

However, numerous fans have speculated that the coordinates that are briefly shown at the appearance of Ronan’s spaceship, the Dark Aster, might hold the key to the missing bombshell—though it’s pretty grimdark. On a previous Reddit thread discussing the “missing” egg, redditor Brandosaurus summed up the theory:

Wow. The general consensus is that the reference to Peter Quill’s mother dying of cancer in the film’s opening sequence is ultimately a happy one, since she reappears at the end of the film when Quill has become part of a new family and made his peace with her death. Still, it’s a chilling callback that could have implications for the next movie, particularly since it’s likely that we’ll meet Quill’s father.

Fans had pretty well floated the ship coordinate theory before this weekend, however. So if it’s not this easter egg, then what is it?

Apart from giving us more mystery to digest, the Q&A session with Gunn also brought us this very important cat news:

Fan: So do you bring your cat with you when you shoot and if so do you construct a new outdoor area for him/her?

James Gunn: Yes I do and yes I do.

Thanks for bringing us the hard-hitting updates, fans.