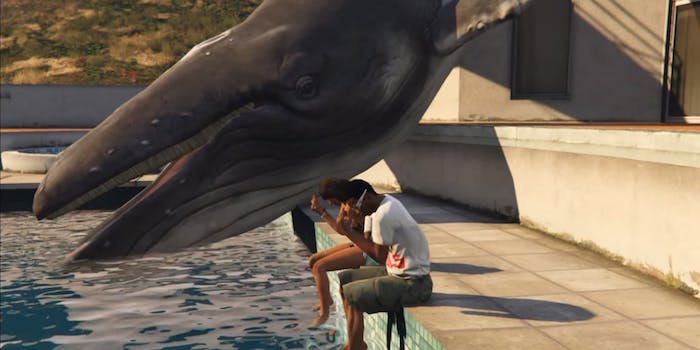 Simply having a mod installed may be enough to lose access to the online portion of GTA V on PC.

The ability to mod PC games is one of their greatest advantages over console versions of the same games. The arrival of GTA V on PC thus heralded the rapid deployment of mods like Script Hook V + Native Trainer, which makes it possible for GTA V players to use cheats like invulnerability and generating as much money as the player wants without having to work for it. Native Trainer has also gifted us video of whales falling from the sky over Los Santos.

The Native Trainer mod doesn’t work in the online portion of GTA V, but just having it installed might be enough to trigger a ban from GTA Online. The GTA V Steam community forum is flooded with complaints from modders who were banned from GTA Online, even when the modders claim to only have used mods in the single-player story mode, like innocuous FOV mods that widen a player’s field of view.

Rockstar Games has been liberal with GTA Online bans in the past. Money glitchers in GTA Online arguably cost Rockstar real world money, and glitchers using invulnerability hacks or other unfair advantages can make life hell for GTA Online players sticking to the rules. If there is no way for Rockstar Games to differentiate between mods intended for single player or online multiplayer modes for GTA V, a liberal banning policy from GTA Online would logically follow.

Rockstar Games did not respond to request for comment. It may have no reason to elaborate on the situation, however as the End User License for GTA V prohibits users from making alterations to the game, a very common aspect of EULA agreements.

When GameSpot in April asked Rockstar about mod support for GTA V, the developer responded with “Since GTA Online has such a massive and vibrant community, our primary focus is making sure that nothing detracts from that experience or has a negative impact on the overall community of players.” In light of current events, the response seems prophetic.

The FiveM mod currently in development aims to allow GTA V players on PC to create custom GTA Online servers, which in turn would allow server admins to enable whichever mods they saw fit to support. An early version of FiveM was made available for download on Monday.