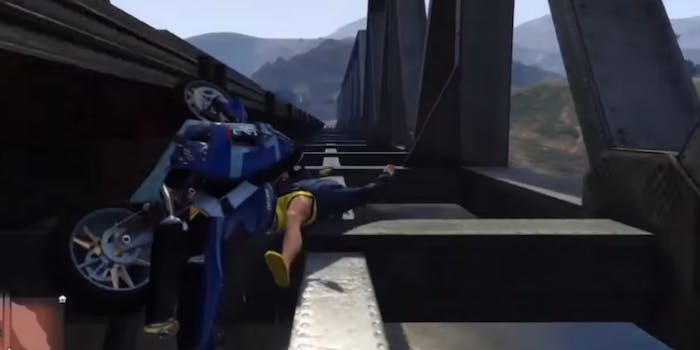 Don’t try to jump bridges while your motorcycle is on fire.

Sometimes Grand Theft Auto Online is like a Three Stooges movie, albeit one with ultra violence, expensive sports cars, and very large guns.

Vehicles in GTA Online are a consistent source of amusing mayhem, especially when stunt attempts gone horribly wrong. Today’s dose of fatal GTA mishappery comes from the YouTube channel TeamPower AwesomeTeam. It involves a driver on a motorcycle attempting to jump between the tops of the supports on a metal bridge.

We can feel some of those crashes, right in the gut. If you want to give this a try, the bridge in question is directly opposite the entrance to the military base on the west side of San Andreas.