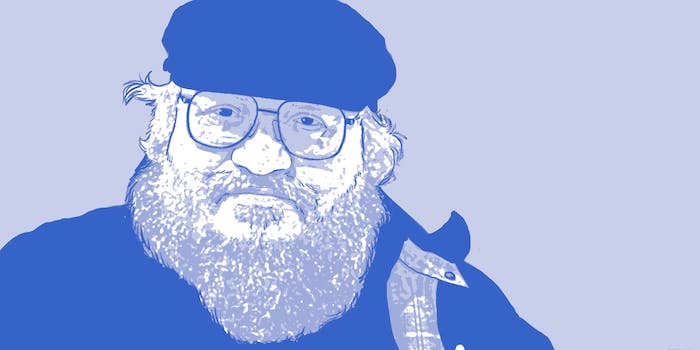 He clearly wants wants this world to be more merciful than the one he created.

Game of Thrones may be a brutal, unwelcoming place for all those who wander, but this week George R.R. Martin has made it clear he doesn’t want Westeros to be a model for real life to follow.

The beloved author has been speaking out on his LiveJournal on behalf of the victims of the political unrest in Syria. In the days since the Paris attacks by ISIS, many U.S. states have opposed opening their borders to the Syrian refugees. But as GRRM pointed out on Friday, welcoming refugees and other huddled masses is an American tradition.

After opening his LJ post with a quote of Emma Lazarus’s beloved Statue of Liberty poem “The New Colossus,” Martin elaborates on what he feels is every U.S. citizen’s duty to understand all of the poem, not just the famous parts:

For me, Lady Liberty and the words on her base represent the best of what this nation of immigrants is all about. One has to wonder if all the governors (including our own governor here in New Mexico, I am ashamed to say) and congressmen voting to keep out the Syrian refugees have ever visited the Statue, or read the words on her base. If so, they surely failed to understand them.

Of course, most everyone knows the part about ‘your tired, your poor, your huddled masses,’ but let me draw your attention to some other lines of the poem:
— a mighty woman with a torch… her name Mother of Exiles,
— from her beacon hand, Glows world-wide welcome,
— send these, the homeless, tempest-tost, to me.

Emma Lazarus had it right. Donald Trump and thirty-one governors have it wrong, wrong, wrong.

The Syrian refugees are as much victims of ISIS as the dead in France.

Let them in. Santa Fe, at least, will welcome them.

GRRM certainly isn’t the first person to point out that the Syrian refugees are the first victims of ISIS, trying to flee the effects of terrorist violence rather than promote it themselves. But judging from the outpouring of responses his post prompted from fans, it’s a point that can’t be made often enough. In response to one skeptical fan, he added:

History has demonstrated many times that immigrants revitalize a society, and create much more than they take. The sort of “they are just a bunch of lazy leeches” sentiment you are expressing here was also directed at the Irish, the Italians, the Germans, the Polish, the Chinese, and many other immigrant groups in the past, all of whom over time have vastly enriched the culture of America. I have no doubt that the same will prove true of the Syrians.

Martin also noted that opening our borders to the refugees is a “moral imperative.”

If it was important enough for him to take time out of his locked-down schedule to step away from writing The Winds of Winter, it must be a point well worth making.