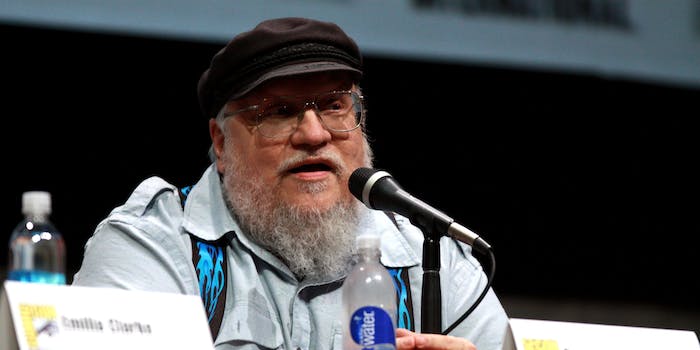 George R.R. Martin’s publisher has some bad news for fans eager for the next book

Fans will have to wait even longer now for the next installment in ASOIAF.

Just as Game of Thrones fans settled in on Cloud Nine with the newly leaked season 5 trailer, they received bad tidings from the ravens on the next-novelfront.

The Guardian is reporting that The Winds of Winter, the sixth book in George R.R. Martin’s  A Song of Ice and Fire series, won’t be released in 2015, contrary to most fans’ expectations. The most recent book in the series, A Dance With Dragons, was published in 2011. While the HBO TV show has grown exponentially more popular every year, book fans—a community also growing due in part to the show’s popularity—haven’t had a new book to pore over since the end of season 1.

Jane Johnson, Martin’s publisher at HarperCollins, caused a stir among ASOIAF fans earlier this month for this tweet:

@bonefish914 It's not in our 2015 publishing schedule as it stands – I know no more than that at the moment.

Speaking to the Guardian, Johnson offered a little more detail.

“I have no information on likely delivery,” she said. “These are increasingly complex books and require immense amounts of concentration to write. Fans really ought to appreciate that the length of these monsters is equivalent to two or three novels by other writers.”

To take the edge off the wait, The Tales of Dunk and Egg, a series of novellas in the ASOIAF universe set about 90 years before Martin’s books, will be re-released in October in a new illustrated edition. Johnson promised that there will be plenty of clues for fans to pick up in the novellas, which were previously only available as part of fantasy anthologies.

Assuming that nothing changes between now and the end of the year, it might be time to start accepting that the show will overtake the books. This is something Martin expressed concern about last year, prior to the start of season 4.

Martin has said many times that when he’s ready to announce TWOW‘s publication date, he will do it in the only place where he himself posts: his LiveJournal. He reiterated this last month in an exasperated post when rumors spread that he was planning to reveal the publication date for TWOW after a Westerosi-themed “12 Days of Christmas” started to appear on his Twitter account (which is run by other people).

Look, I’ve said before, and I will say again, I don’t play games with news about the books.  I know how many people are waiting, how long they have been waiting, how anxious they are.   I am still working on WINDS.  When it’s done, I will announce it here.  There won’t be any clues to decipher, any codes or hidden meanings, the announcement will be straightforward and to the point.  I won’t time it to coincide with Xmas or Valentine’s Day or Lincoln’s Birthday, the book will not rise from the dead with Jesus on Easter Sunday.  When it is done, I will say that’s it is done, on whatever day I happen to finish.

I don’t know how I can make it any clearer.