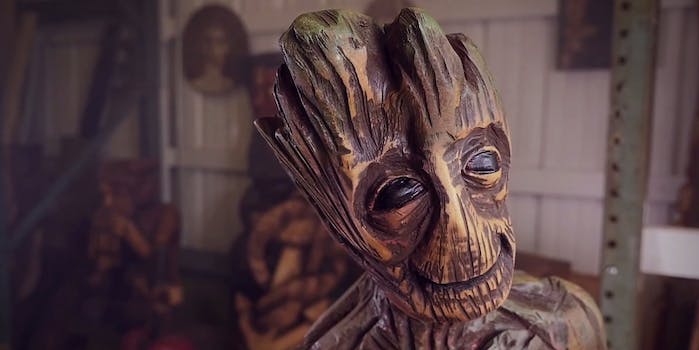 Groot gets immortalized by a chainsaw artist

It takes a lot of talent to turn a tree into another tree.

While many were busy touting the hunky Chris Pratt as the breakout star of Guardians of the Galaxy, an underdog was laying down his roots, ready to take the spotlight.

We’re talking, of cours, about Groot, love of whom has sprouted in the hearts of fans everywhere. He and Rocket garnered their own Calvin and Hobbes-esque comic strip, he’s had a dance off with Taylor Swift, and he’s inspired his own viral prank called “Grooting.”

Now, the most entertaining tree since LOTR’s Treebard has garnered enough fame to be immortalized in sculpture thanks to chainsaw-artist Griffon Ramsey. The YouTube artist, who has become renowned for her woodcarving videos, solicited suggestions on Twitter for the next subject for her carving, and “We are Groot!” was the resounding response.

Thanks to the amazingly talented Ramsey, you can watch Groot take form out of a gigantic hunk of eastern red cedar in a process that feels very meta. Our only question is, where can we buy one?