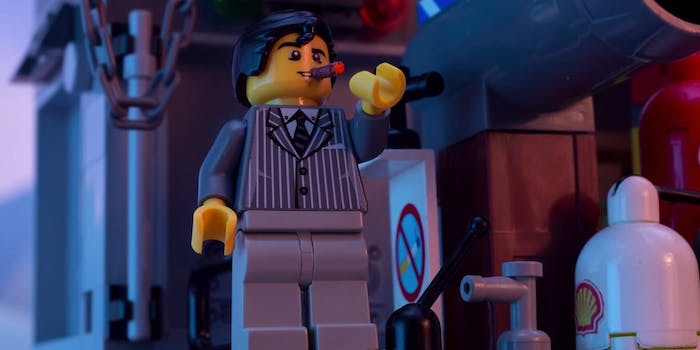 You're not just poisoning the minds of the next generation; you're killing innocent Lego polar bears, too.

All in all, Lego is just another brick in the wall of big business. Or at least that’s the message that Greenpeace is hoping to send with its latest somberly haunting video.

In an attempt to fight brick with brick, Greenpeace has constructed an idyllic Lego frozen tundra complete with polar bears, wolves, snowy owls, ice skaters, and Inuit fisherman, only to have them all drowned in dark crude oil, thanks to the greedy efforts of Shell and their big businessmen. The real kicker though? The entire video, which drowns your happy childhood memories alongside those poor Minifigures, is scored by a chilling rendition of “Everything Is Awesome” from The Lego Movie.

Greenpeace is hoping that its snuff film will guilt you into signing a peition that asks Lego to cut its ties with the oil and gas company. On Legoblockshell.com, Greenpeace writes:

As part of the co-promotion, LEGO has branded Shell’s logo on a special set of its toys. By placing its logo in the hands of millions of children, Shell is building brand loyalty with the next generation of consumers. Shell has launched an invasion of children’s playrooms in order to prop up its public image, while threatening the Arctic with a deadly oil spill. We can’t let Shell get away with it.

Next time you’re at the pump or in the aisle of a Toys “R” Us, good luck not being haunted by that rendition of “Everything Is Awesome” or the desparing faces of Lego wildlife before they met their death at the hands of big oil.