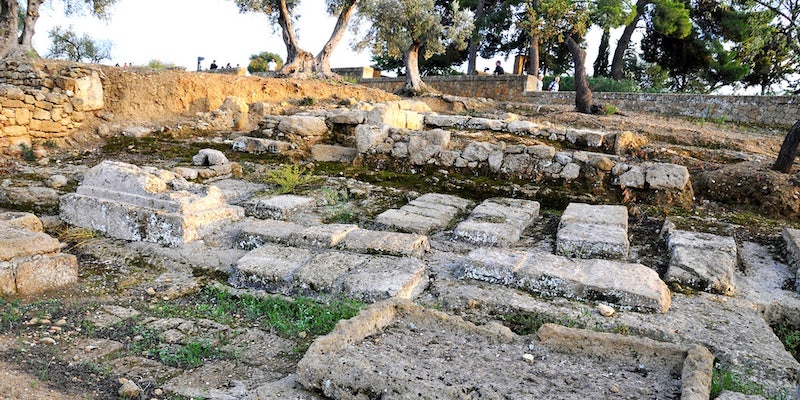 'The Walking Dead', but for ancient Greece.

Researchers studying a gravesite in Sicily have come across two very odd burials that they say suggest an early belief in zombies.

The graves had been considered odd when they were uncovered in the 1980s along with 3,000 others in a Greek necropolis near Kamarina called Passo Marinaro. (There were so many Greek colonists in southern Italy from the 8th century onward that it was known as Magna Graecia or “Greater Greece.” Kamarina was occupied from the 6th century B.C. to 1st century A.D., and Passo Marinaro was employed from the 5th to the 3rd century B.C.)

The inhabitants of the two peculiar graves were clearly pinned down by rocks and other heavy materials, as if those conducting the burials were worried about the graves’ inhabitants rising from the dead and wreaking havoc on the living.

According to archaeologist Carrie Sulosky Weaver a postdoctoral fellow at the University of Pittsburgh, that’s exactly what the Greek burial workers thought might happen.

In an article called “Walking Dead and Vengeful Spirits,” Weaver described ancient Greek fears of what she called “revenants.”

“Far from being a modern invention, genuine belief in what we would deem today to be ‘fringe’ or ‘occult’ was commonplace in the ancient world,” Weaver wrote. “Although specific attitudes toward paranormal activity differed according to time and geographical place, the ancient Greeks provide an example of a civilization that wholly embraced the supernatural.”

Yes, a belief in the undead was far from a localized Balkan phenomenon.

The Greeks believed that “to prevent them from departing their graves, revenants must be sufficiently ‘killed,’ which [was] usually achieved by incineration or dismemberment. Alternatively, revenants could be trapped in their graves by being tied, staked, flipped onto their stomachs, buried exceptionally deep or pinned with rocks or other heavy objects.”

Of the two Kamarina graves, one contained an adult with evidence of malnutrition who had been buried with shards of an amphora jar on its head and feet. The other grave contained the remains of a child, between eight and 13 years old, which were covered with large, heavy stones.

This description of these two deceased people suggests a hint of a story that wouldn’t have been out of place in the kind of Greek village that Nikos Kazantzakis wrote about in the 1940s and 1950s: A mother and son, widowed and orphaned with no one to speak for them, who sickened, both physically and mentally, and, when they died, were shunned even in death.

Although Hollywood tends to separate zombies from vampires, ancient occult beliefs were rarely so cut and dried. (Except when it came to the bodies.) Either way, the conferring of “revenant” status on a deceased person seemed to be a reflection of one’s outsider status in life. It was a practice ranging in time and space from as early as 4,500 B.C. in Cyprus to as late as the 14th century A.D. in Bulgaria.

As fascinated—even obsessed—as modern humans are with vampires, zombies, werewolves, and mummies, imagine living in a time when such an obsession was yoked to a spiritual, profoundly non-ironic belief in their reality.