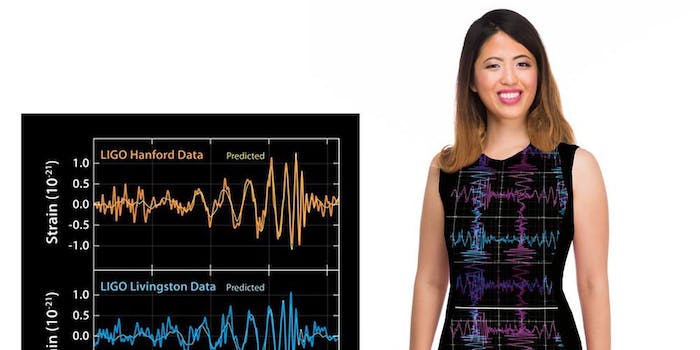 Gravitational waves dress lets you wear the fabric of spacetime

It was inspired by the LIGO discovery

The discovery of gravitational waves—predicted nearly a century ago by Albert Einstein—has inspired some serious art. Now, it has inspired a Bay Area-based fashion designer to make a dress that’s as smart as it is smart-looking.

From far away, the dress looks like a simple black shift with a blue-and-purple plaid design on it. But get a little closer and you’ll see that the dress boasts the data from LIGO.

The dress (available for $179) is one of many science-y offerings from Shenova. According to the site’s about page, designer Holly Renee wants to mix traditionally scientific imagery with classic, feminine designs. “I think there is still a lot of misinformation about what a scientist or a programmer looks like (read: white male) and I like to think that by creating a bolder image for women through my designs will help them make a bigger impact, be more memorable and help remove the stigma of male-domination so prevalent in these fields,” Renee writes.

She said she’s worked with many academics and scientists, but that her designs are for everyone who want to show off their love for STEM.